Over 1 million Covid-19 vaccine doses given out in China; govt plans further rollout

This file photo taken on Sept 24, 2020 shows a staff member checking vaccines during a media tour of a new factory built to produce a coronavirus vaccine at Sinovac, one of 11 Chinese companies approved to carry out clinical trials of potential coronavirus vaccines, in Beijing. - AFP

BEIJING, Dec 19 (Bloomberg): China said it has already administered more than 1 million coronavirus vaccines since July and plans to distribute more, initially targeting workers in industries where they’re at higher risk of infection as the country seeks to be at the vanguard of the global Covid-19 immunisation effort.

Vaccines developed by Sinovac Biotech Ltd. and the state-owned China National Biotec Group Co., known as CNBG, have been dispensed in the country since they were granted emergency-use authorization in July.

China is now planning wider distribution of the experimental shots with those working in hospitals, customs, in public transport and cold-chain logistics as well as vulnerable groups, including people with pre-existing medical conditions, to receive them first. A later phase of the rollout will involve the general public, Zeng Yixin, vice minister at China’s National Health Commission, told reporters in Beijing Saturday.

Zeng said colder weather with the onset of winter poses challenges to China’s control of the virus, which it has all but eliminated internally with a combination of strict border controls and mass testing.

"Our goal is to establish herd immunity through inoculations so that Covid-19 can be effectively controlled rapidly,” he said. The vaccine tally puts China well ahead of the U.S. and U.K., which only recently gave emergency authorization to shots developed by drug giant Pfizer Inc. and Germany’s BioNTech SE, allowing them to start vaccinating people in specific target groups. The U.S. also cleared a Covid-19 vaccine from Moderna Inc. on Friday. Russia, which says it is also already delivering home-grown shots to its population, has vaccinated 320,000 people, according to data compiled by Bloomberg.

The 1 million figure refers to doses administered, not the number of inoculated. CNBG Chairman Yang Xiaoming said recently that more than 650,000 people had been vaccinated with Chinese vaccines, according to local media reports. Both CNBG and Sinovac’s candidates follow a two-shot regimen of an initial jab and then a booster.

While Chinese officials didn’t disclose how many people will be vaccinated in the next phases of the inoculation effort, Bloomberg reported Friday that authorities are planning to administer locally-developed shots to as many as 50 million workers deemed at high risk of exposure to the virus by early February, a significant expansion that will see the local branches of China’s Center for Disease Control and Prevention, medical clinics and hospitals mobilized to hit the ambitious target.

The rollout, which comes amid speculation China’s drug regulator is close to signing off on the CNBG and Sinovac vaccines for general use, would be roughly the equivalent of inoculating the entire population of South Korea in less than two months, a move that would put the country well in front in the distribution race if it succeeds. China’s quick deployment of coronavirus testing over the past few months, with millions tested over a number of days after cases were identified, may be a model for how the nation of 1.4 billion people intends to approach rolling out vaccines. The plans to vaccinate 50 million people underscore Beijing’s focus on preventing a repeat of the deadly outbreak that started in the city of Wuhan early this year. Though China has nearly stamped out local transmission of the virus and life is largely back to normal for the vast majority of its population, a smattering of infections have emerged in recent weeks in the country’s northeastern province of Heilongjiang, in Xinjiang in the west and Sichuan, and even in the highly guarded Chinese capital.

No severe side effects have been observed among those who have received the Chinese vaccines so far, Zheng Zhongwei, a director who oversees coronavirus vaccine development at the National Health Commission said Saturday. China will disclose data on the efficacy of Chinese shots "in time,” with the developers filing updates to the drug regulator on a rolling basis.

Compared with Western vaccine efforts, very little data on efficacy and safety from the late-stage human trials has been made public on Chinese shots. Five of the vaccine candidates are in last stage, Phase III clinical trials being conducted at virus hotspots across Southeast Asia, South America and the Middle East.

The relative lack of transparency and information has fueled skepticism over China’s shots, which President Xi Jinping has said will be rolled out globally. The country is also part of the World Health Organization Covax initiative designed to distribute vaccines to the developing world. 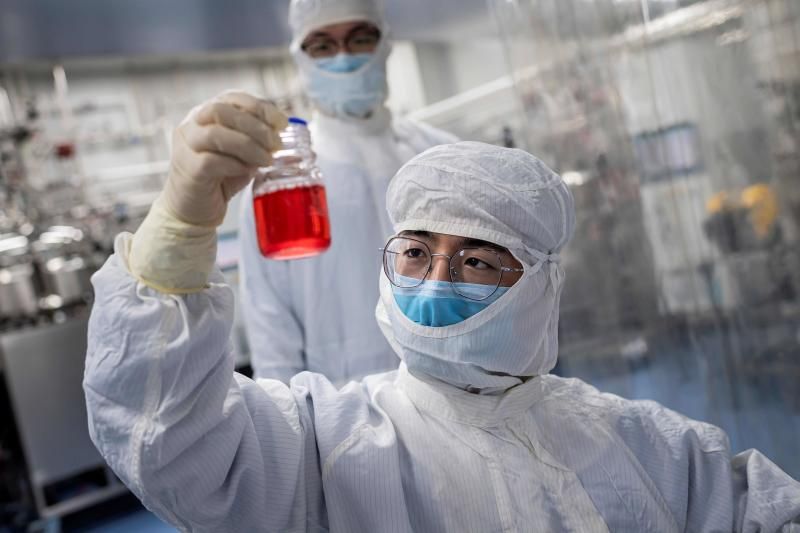 Chinese vaccine developers have also inked supply deals with countries like Indonesia, Singapore, Turkey and the United Arab Emirates, which said earlier this month that CNBG’s shot showed an efficacy rate of 86% in a local clinical trial of more than 30,000 people.

Research indicates that China’s vaccines afford protection against Covid-19 for at least six months, the National Health Commission’s Zeng said at Saturday’s briefing. Antibodies continue to be detected in people who received shots as early as March, he said.

With the massive immunisation effort shifting into gear, China’s CDC will leverage its existing monitoring systems to keep track of any serious side-effects from the Covid-19 vaccines, said Wang Huaqing, the body’s chief immunization expert. China’s mechanisms for monitoring vaccine safety meet WHO standards and the hospitals and clinics that will administer the shots nationwide have the capability to identify and treat any side-effects, he said.

Officials have said previously that there have been no serious adverse events -- illnesses in people who receive a vaccine that can sometimes halt a clinical trial -- among those inoculated under the emergency-use program. The country has defended its wide interpretation of the emergency authorization, which includes workers at state-owned companies headed overseas, saying the risk of Covid-19 returning through its borders remains high. - Bloomberg
Article type: metered
User Type: anonymous web
User Status:
Campaign ID: 1
Cxense type: free
User access status: 3
Subscribe now to our Premium Plan for an ad-free and unlimited reading experience!