SINGAPORE (The Straits Times/ANN): There has been a rush to hit the high seas with 13 cruises to nowhere setting sail over the past month or so.

The round-trip cruises without ports of call have taken 30,000 or so passengers since Genting Cruise Line's World Dream got the ball rolling on Nov 6.

The trips, which are part of a pilot programme announced by the Singapore Tourism Board (STB) in October, impose strict safety measures to keep Covid-19 at bay, including a reduced 50 per cent capacity and pre-boarding testing for passengers.

The World Dream, which has run 11 cruises since its first one on Nov 6, offers two- and three-night "Super Seacation" voyages.

Genting Cruise Lines has extended the itineraries to the end of March.

"More Singapore residents are increasingly becoming aware of the start of World Dream's safe pilot cruises... along with the benefits of cruising," said Michael Goh, president of Dream Cruises and head of international sales at Genting Cruise Lines.

"The responses and inquiries continue to be very positive and we remain highly optimistic of the growing demand during the school and festive year-end holidays."

Royal Caribbean International held a pilot cruise to nowhere on the Quantum of the Seas on Nov 30 and last Thursday (Dec 3) launched its first consumer-oriented voyage since the pandemic began with a four-night getaway for 1,300 passengers.

The vessel will set sail again on Monday (Dec 7) on a three-night jaunt with 1,700 voyagers.

Angie Stephen, managing director for Asia-Pacific at Royal Caribbean International, noted: "The demand for our product has certainly exceeded our expectations. Singapore is a great base of business, and we're planning on building back confidence in the cruising industry and ramping up safely."

Stephen said demand for its cruises from January to March was already building up, with January more than 50 per cent booked.

She added that many customers were families and young professionals, with most passengers aged 45 and under, while around 10 per cent are in their 60s and above.

"As for whether more ships will be added to the sailing roster, we'd like to start safe and slow -- but as Royal Caribbean has the most ships in the world, there's always an opportunity."

The need to get tested for Covid-19 before boarding has not dampened the spirits of excited travellers.

"I much prefer cruising to staycations. With cruises, you don't feel like you're stuck on the island, and despite there not being ports of call, there's loads to do on the boat," said Ricky Goh, 29, who has been on two cruises on the World Dream.

"Going for a jog on the deck of a ship and watching the sunrise from the sea - these aren't things you can do from a hotel room.

Retiree Nishith Kumar, 66,"cannot wait" to set sail on the Quantum of the Seas in January with his wife and 33-year-old son.

He said: "It'll be a joy to travel once again with my family... I'm looking forward to exploring the ship, relaxing, and breathing in some fresh ocean air."

The STB said in October that passengers must wear masks and observe safe distancing while cruise lines must be audited and receive CruiseSafe certification.

"The Government will monitor the outcomes of the pilot sailings carefully in the coming months before deciding on the next steps for cruises," said STB cruise director Annie Chang. 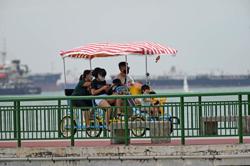