JAKARTA (The Jakarta Post/ANN): The Indonesian Coal Mining Association (APBI) signed on Wednesday (Nov 25) a deal with the China Coal Transport and Distribution (CCTD) association to export US$1.46 billion worth of coal to China next year.

The value is low compared to that of realised exports this year, but the APBI said in a joint statement with the Energy and Mineral Resources Ministry on Thursday that it hoped the deal would translate into 200 million tonnes of coal exports to China in 2021.

The ministry in Thursday’s statement noted that Indonesian coal exports to the East Asian country reached $4.9 billion up until September this year, a bigger figure than the deal value.

Coal demand collapsed this year, resulting in the Indonesian benchmark coal price plummeting to a five-year low of $49.42 per tonne in September, before recovering to $55.71 per tonne in November, ministry data show.

Nonetheless, the price remains weaker than the average $77.89 per tonne last year with experts predicting prices to remain below 2019 levels throughout next year.

“With this deal, coal miners are optimistic for 2021 even though the global coal market is not expected to recover to 2018-2019 levels, ” said APBI chairman Pandu Sjahrir. 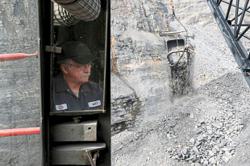