A village with about 400 households in the province was heavily flooded on Sunday after being hit by run-off from the Khao Nam Khang mountain range on the Thai-Malaysian border following a heavy downpour on Saturday, the DDPM said.

The water was running rapidly and at a dangerously high volume in some areas, causing not only the 400 households to flood, but also roads and farmland, it said.

Villagers were forced to move their belongings, including cars and motorcycles, to higher ground.

Thailand's South is currently experiencing the annual monsoonal trough, bringing continuous rain and flashfloods into the region, according to the Thai Meteorological Department.

Meanwhile, Thailand's Ministry of Education has announced on its website that Thai King Maha Vajiralongkorn will be donating royal land title deeds worth 10 billion baht (US$330 million) to four educational institutes.

Ownership of royal title deeds covering more than 100 rai (16 hectares) of land along Ratchawithi Road in Bangkok, will be handed over to two universities and two schools that are already located on the land, the ministry's website said.

The report also said that apart from the handover of the deeds, the royally-owned land where Dusit Zoo, the country's first public zoo, was once located will be used for the construction of a public hospital. 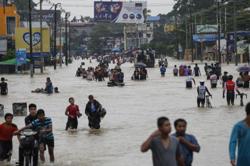