Putting the ‘art’ in heart

Cambodia lauded for fight against virus

UNESCO has launched an art campaign in Cambodia to counter xenophobia, stigmatisation and disinformation triggered by the Covid-19 pandemic.

The campaign was announced on Nov 16 with youths, journalists and officials taking part in blackboard chalk drawings to show their joint efforts against discrimination and fear of people with Covid-19.

In a press release, Unesco said participants used chalk to draw pictures, short words and symbols with a larger meaning.

“The words have been selected to represent both the challenge and positive actions and behaviour inspired by the Open Your Heart campaign theme.

“The underlying idea behind the dandelion, for example, is the fragility of life and the spread of the virus through the air, ” it said.

Unesco information and communications programme officer Vorn Makara said the organisation began a pilot campaign for two months before the official launch, noting that members of the public and various institutions volunteered in this effort to promote intercultural dialogue, mutual understanding and tolerance.

Makara said the goal of the campaign is to promote mutual understanding and prevent discrimination and fear of foreigners.

It is also to prevent the spread of Covid-19 disinformation.

Unesco hopes that simple and easy words, including logos, will make it easier for communities to understand and participate in the campaign, Makara said.

“The nature of the chalk is easily eroded and we hope the negative impact on society caused by Covid-19 will disappear by the end of the rainy season too, ” she said.

The campaign is taking place in collaboration with Cambodian coffee chain Brown Coffee, office space rental firm Raintree Cambodia, the Farm to Table restaurant and the Dutch&Bean cafe in lending space for featuring the artwork on their walls.

Brown Coffee, for example, has featured the artwork at its locations in Toul Kork district and on street 57 in the Boeung Keng Kang I commune, Phnom Penh.

Brown managing director Liv Chhoung said the firm has always supported the community spirit and the community is where everyone feels they belong, regardless of race, colour, religion or sexuality. — Phnom Penh Post/ANN 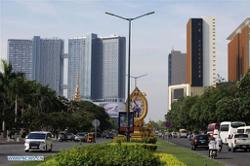 Cambodia lauded for fight against virus