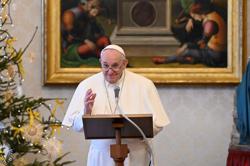 A love lost: A man holding a photo of his family including his wife whom had left him for an alleged spiritual leader. — The Straits Times/ANN

A former massage therapist here who claims God speaks to him directly and says gambling is permitted in order to help needy Muslims has several men blaming him for ending their marriages.

They say he took the women as his spiritual wives.

Even though the men admitted to initially being followers of his alleged deviant teachings, conducted in sessions that often had him going into a trance, they say they quit when he made claims that disagreed with them.

Among other things, he had described himself as a “prophet”.

The women include local university graduates, one of whom was a senior executive with a local Malay Muslim organisation.

The Straits Times was alerted to the man’s activities by the former husbands of three of the women, as well as four past followers of the group.

They say they want to warn the Muslim community about the group, which at its largest had more than a dozen members.

The man in his 50s, who is now a small business operator, is legally married under the Registry of Muslim Marriages and has three adult children.

Checks with the Singapore Islamic Scholars and Religious Teachers Association show his name is not listed on the Asatizah Recognition Scheme, a database of certified religious teachers.

When approached at his home in the western part of Singapore, he denied any knowledge of the group and said he has no “spiritual wives”.

Four of the women referred to each other as “sister” when contacted.

One of them said people with agendas have been spreading “untruths” about the group.

The man is known to the authorities here.

He was the subject of a police investigation in 2015 after allegations emerged that he had behaved inappropriately towards the daughter of one of the “spiritual wives”.

The police had replied in 2016 that after careful consideration of the facts and circumstances, it was not taking action against him.

Speaking on condition of anonymity, one former follower said he used to attend prayer classes the man conducted.

During one of the sessions he attended with his wife, the former follower said the group leader told him to buy 4D and Toto so that with the winnings, they could help other Muslims and grow the business the group ran.

Muslim leaders here had previously reminded the community the gambling is firmly prohibited in Islam. — The Straits Times/ANN