Sean Connery: He was loved from US to Europe to Asia and in South-East Asia; and he made James Bond larger than life

That Iconic Moment ... In this file photo dated April 20, 1964, James Bond, alias, Sean Connery, finds himself in a sticky situation with actress Shirley Eaton at Pinewood Studios, near London. Miss Eaton was given a liberal coating of gold paint for a scene in the latest Bond thriller "Goldfinger," with unidentified woman at top. Scottish actor Sean Connery, considered by many to have been the best James Bond, has died aged 90, according to an announcement from his family. - AP

I've always loved one detail in the story of how Sean Connery, in 1961, nabbed the role of James Bond. A number of other actors were being considered for the part, like Roger Moore and James Mason. Ian Fleming, who had written 10 Bond novels (the first, "Casino Royale," was published in 1953), had his heart set on the elegant and slightly fussy David Niven. That tells you a lot about how the Bond series might have turned out had Connery not nailed the role.

At the time, Connery wasn't a well-known actor; his most prominent film was the Disney musical leprechaun fable "Darby O'Gill and the Little People" (1959). When he met with the producers Albert R. Broccoli and Harry Saltzman at a pub in London, he wasn't at the top of their short list.

They spoke for a while, and then, when it was time to go, instead of making a big show of it, Connery simply got up, said goodbye, and walked out. It was brusque and not very political, a real no-frills exit. It was then that one of the producers looked up and said, "That's him." Meaning: That's Bond. That's the way James Bond would have left the room.

What's telling about that story is that it captures how Connery infused the role of Bond with a gruff existential animal magnetism that emerged entirely from who he was. It wasn't just a matter of acting -- it was being. Connery, a former bodybuilder who'd been in the Royal Navy and worked as a lorry driver and labourer, was an acerbic Adonis who singed the screen with his inner quality of roughneck bravura. 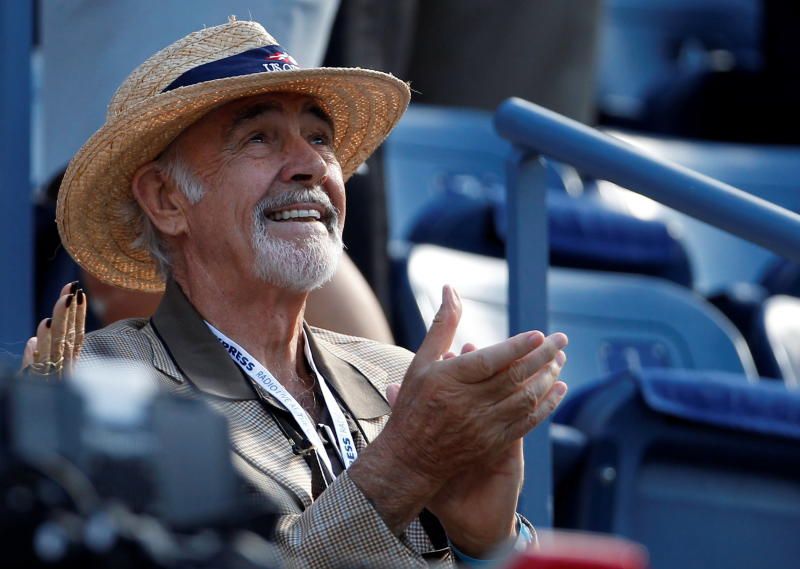 As Bond, he was broodingly direct, drop-dead amorous, and as graceful as a jungle cat. And more than anything, he was dangerous. Bond, as an MI6 agent, had a license to kill, but what Connery gave 007 was the ease to kill, the ability to dispatch a foe in three seconds without ever raising his pulse. It was the quality of a born hitman, and the drama of Bond was that Connery let you know, even during all the "civilized" moments, that he was holding that quality in check. His 007 had a quicksilver litheness, a dark joy he took in his own cunning. You could also say that he harnessed his killer instinct to the act of seduction.

Even now, Connery's look in the Bond films is startling: the stand-up coif of shiny black hair (which, for a while, was his own), the long black eyebrows that were like dancing daggers, the lips that puckered out when he smiled (even his grin carried that glint of aggression), the extraordinary long dimples that creased his outrageously handsome face, giving him a majestic ruggedness. And that Scottish coffee voice! So gruff, so lilting, so playful, so debonair, so musical, so cutting. It was a voice that could be gentle, but most of the time it was a voice that took a delight in telling you what to do.

One reason the Bond films became such magical entertainments, never ruled by their gimmicks, is that the famous 007 accoutrements -- the Aston Martin DB5, the jet pack, the Walther PPK pistol, all those concealed and converted weapons Q gave him -- played like natural extensions of the Connery spirit. They were all about speed and style and sleek command. The tuxedo became the Bond emblem because Connery, though he looked better than any man ever looked in a tuxedo, exuded a raw physicality that undercut the pretense of it. Tuxedoes are what fancy people wear, but Connery's Bond, when he wore one, was like a fabulous bruiser slumming with the swells.

The Bond films were part of the walk-up to the sexual revolution. Starting in the first one, "Dr. No" (1962), the character emerged from the same world that gave us Playboy magazine and the presidential rat-pack mystique of JFK. Yet though Bond, with his shaken-not-stirred martinis and diamond gleam, started off as a refined caveman of his era, it was the timeless; with which Connery played him that hooked us on the series forever. 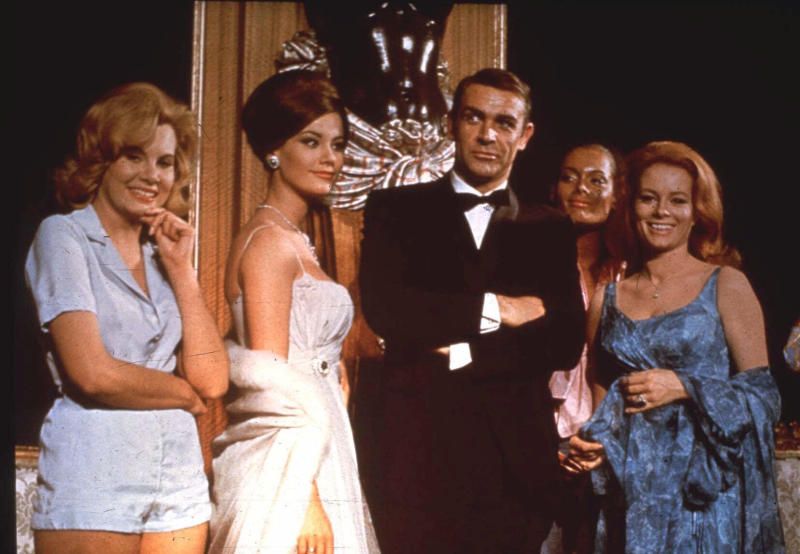 Connery as James Bond in Thunderball. The actor will always be remembered for that famous role he played in six Bond movies. - AP

As much as I love Daniel Craig (especially in "Casino Royale"), I'm of the school that no one can touch Connery as Bond. And you could say that the eternal story of that series is one actor after another trying.

Connery also chafed at the role of Bond, as the greatest actors who've played him tend to do. Not counting "Never Say Never Again," his misbegotten 1983 comeback to the role, Connery played 007 in six films, and by the time of "You Only Live Twice" (1967), you can feel the weariness with which he's approaching the character.

That movie has eye-popping sets and a memorable soundtrack, but in many ways the life force has gone out of it; the Bond we knew and loved in "Dr. No," "Goldfinger," "From Russia with Love," and "Thunderball" has lost his reason for being. And Connery was right not to want to box himself in. Then again, the real reason for his impatience is that he was a great actor. Once he left the Bond series, he would prove it, again and again.

He showed his adventurousness even in "Marnie" (1964), the Hitchcock film he made at the heart of the Bond era. It's a movie that's still controversial among Hitchcock buffs (some love it, some hate it), but if you watch it now you'll see that while it's far from a Hitchcock masterpiece, it's a weirdly arresting psychological thriller that was actually ahead of its time. Essentially, "Marnie" is the first Hollywood movie about borderline personality disorder, and Connery, as the wealthy widower who falls for Tippi Hedren's deeply damaged kleptomaniac, acts out the desperate woe of someone who discovers he's become involved with an emotional ghost. 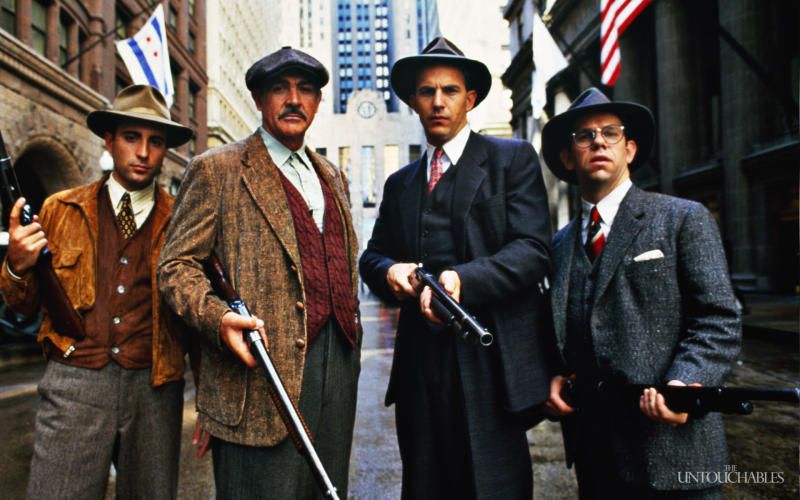 Connery in "Untouchables". - The Star

Cut loose into the scruffy '70s, Connery took a while to find his footing. I'm no great fan of "Zardoz" (1974), John Boorman's loony-tunes post-apocalyptic sci-fi folly, a movie that inspired Pauline Kael to write, "Why is the actor who gave up the pasha's riches that went with the role of James Bond playing the only potent man at the discotheque?" Yet right around this time, Connery gave one of his most thrilling performances in a film that no one I know has even heard of -- it's called "The Offence," and it's a slow-burn police thriller that Sidney Lumet directed in Britain in 1973. It's kind of a lost Lumet film, and a lost Connery film, too (though it's available on Amazon), but it's a dive into dark terrain, and Connery is fearless in it. He shows his ambition as an actor.

What a star of his stature required, however, was more than a good role. The Bond films were one of the last great acts of the studio system, and they made Connery an iconic presence. What he needed was a way to extend that iconic quality, and to find a new kind of majesty and heart within it. He accomplished that in 1975 with a pair of terrific colonial adventure films, "The Wind and the Lion" and "The Man Who Would Be King," the latter directed by John Huston with a wily grandeur that left one haunted.

Connery, at last, had gotten past being the Man Who Would Not Be Bond. In middle age, he'd become a very different kind of presence: warm, bearded, laughing, proudly bald, a kind of fatherly macho man who'd acquired as much worldly wisdom as Bond had super-spy moxie.

And one year later, in "Robin and Marian" (1976), when he teamed up with Audrey Hepburn to play the aging Robin Hood and Maid Marian, the result was incredibly moving. What Connery discovered about himself is that he was actually, beneath it all, a romantic presence.

Offscreen, his own relationships may have been problematic (in an interview with Barbara Walters, he infamously defended himself for saying that it was okay to slap a woman), but what he exuded onscreen was something else: an ideal of hard-won chivalry. 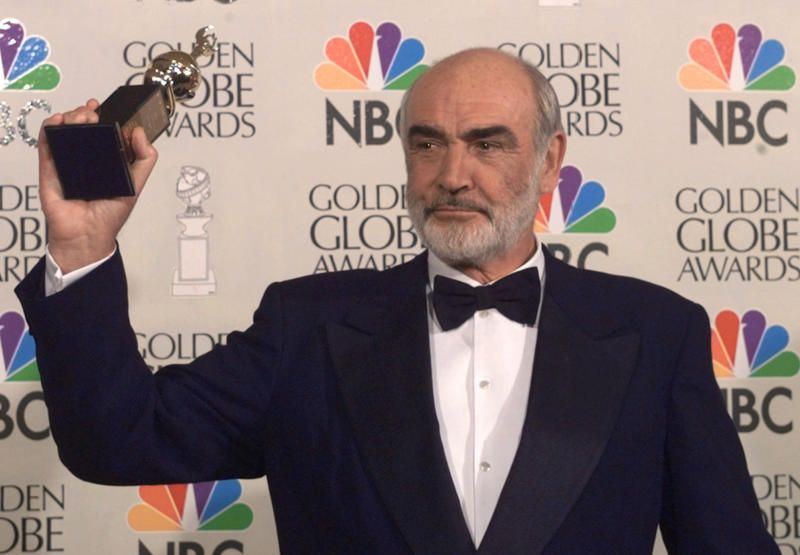 With his Oscar for that role playing as a cop in "Untouchables". - AP

Over the next two decades, Connery would acquit himself in a huge pile of genre movies (he was always the best thing in them). And though most of them weren't love stories, the romantic side of him shined right through them. He took each character he was playing and found the dream that drove him.

You can feel that spirit at work in his Oscar-winning performance in "The Untouchables" (1987), where his Jim Malone, the veteran Irish-American cop who's feeling strangled by the muck of corruption, devotes himself to taking down Al Capone with a fervor that's really about cleaning his own soul. Or in "Indiana Jones and the Last Crusade" (1989), where he out-Indiana Joneses Harrison Ford. Or in his extraordinary performance -- I would say it's one of his two or three best -- in "The Russia House" (1990), a John le Carr? thriller costarring Michelle Pfeiffer that's a crisply satisfying head game, yet one that culminates in Connery's shockingly vulnerable declaration of love.

And then, of course, there's "The Rock," which is a different kind of love story: a "Die Hard on Alcatraz" buddy film that would now be a forgotten piece of trash were it not for how Connery played it -- as an attempt, in every scene, to save the Nicolas Cage character from himself.

Sean Connery made a handful of great movies and, in James Bond, created one of the half dozen most indelible characters in film history. But what also made him one of the great stars is that whatever movie he showed up in, even "The Rock," you always felt like he had brought himself, and that was enough.