The country is approaching the end of the Southwest Monsoon, which runs from June to September every year, while Typhoon Saudel was observed in the northern part of South China Sea, which is expected to continue moving westward, further away from the sultanate, the local daily the Borneo Bulletin reported on Friday, citing Brunei Darussalam Meteorological Department (BDMD),

The BDMD forecast unsettled weather conditions to continue until this weekend. Heavy showers with occasional strong winds are expected with wind gust up to 50 km per hour.

People are advised to take note of the risk of flash floods, especially in low lying and flood-prone areas during heavy showers or thunder showers, as well as the risk of falling trees during gusty winds.

The health ministry said that no more recoveries were recorded, with the total number remaining at 143. There are still two active cases being treated in the National Isolation Center, who were recorded on Oct 14 and 22.

Meanwhile, currently a total of 282 people, who all returned from overseas travels, are in mandatory isolation at the monitoring centers provided by the government. 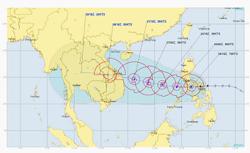