Art that teaches - Children ride their bicycles past a mural that promotes a variety of messages, such as health and safety during the COVID-19 pandemic and respecting one’s elders, in Kalipasir, Central Jakarta. - The Jakarta Post/Asian News Network

The ministry said 2,012 more people were discharged from hospitals, bringing the total number of recovered patients to 67,919.

The Jakarta Post also reported that Jakarta has extended its transitional period from large-scale social restrictions (PSBB) for another two weeks starting from Saturday (Aug 1) after failing to slow down the daily increase in Covid-19 cases.

The capital positivity rate — or the percentage of positive results from all tests — hit 6.5 per cent in the past week, above the figure recommended by the World Health Organisation (WHO) for relaxations, which is 5 per cent or below.

Jakarta’s weekly positivity rate was consistently below 5 per cent in June and part of July.

An outbreak is considered under control if the number is below 1.

“Considering the latest developments, we decided to extend the transitional PSBB until Aug. 13, ” Anies said in a virtual press briefing on Thursday.

He further appealed to the public, especially businesses and workplaces, to comply with health protocols during the period, which is described as a "transitional" phase with the gradual reopening of several essential services.

Anies emphasized that office buildings — many of which had started allowing their employees to come to work — had recorded an alarming rate of new Covid-19 clusters over the past two weeks. 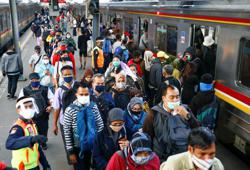