The minister was briefed by Ramlee on the current situation faced by the residents in Mukim Bukit Sawat, parts of Mukim Merangking and Mukim Sukang. Residents have no access-ways as roads were blocked by flooding and traversing the flooded area was only possible by boat.

Action was taken to help combat the situation including continued monitoring of the water level and the distribution of basic necessities. The briefing touched on the efforts made by the NDMC and the Royal Brunei Armed Forces who used boats used to transport provisions

Meanwhile, Brunei Darussalam continued to flatten the curve with no new Covid-19 case reported in the country for the 53rd day, keeping the tally of confirmed cases at 141.

The 409 individuals who recently arrived in the country after travelling abroad are undergoing mandatory isolation at monitoring centres provided by the government.

The minister said, “There is no new case in the country. The number of confirmed Covid-19 cases in Brunei remains at 141.” 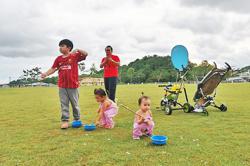