BEIJING (The Straits Times/ANN): Travel between Singapore and China may soon resume if the two sides can work out a system to mutually recognise each other's health certification and exchange personal information.

Singapore foreign minister Vivian Balakrishnan said he had spent a considerable amount of time discussing this with his Chinese counterpart Wang Yi when the two met on Wednesday (March 31) in China's southern Fujian province at Beijing's invitation.

"I want to emphasise that this goes beyond just vaccines, but into serology to PCR (polymerase chain reaction), nucleic acid tests, and then the rest of it. There will need to be verifiable, authorised sources of this information. And again, we need to be able to exchange relevant subsets of this information in a way that would facilitate safe travel," he told Singaporean media at the end of the meeting.

While Dr Balakrishnan said he was not ready to give a timeline on such a roll-out, he added that it was "moving in a positive direction", and that he had also put in a request to Mr Wang on behalf of Singaporean students who want to return to China.

Singapore and China have since last June created a fast lane for essential business and official travel between both countries.

China had in March last year closed its borders to foreigners as the pandemic began spreading throughout the world. It relaxed the rules late last year by letting certain categories of foreign nationals living and working in China re-enter the country.

As the pandemic raged last year, the two countries were able to support each other,"and not all of this was publicised", he said.

Both nations had, among other things, worked together on providing medical supplies and repatriation of citizens.

"But the fact that we were able to step up and help each other illustrates this point about a friend in need is a friend indeed", which, says Dr Balakrishnan,"reflected the already existing strong relationship based on trust goodwill, and a long track record over the years".

As both sides move into a post-Covid-19 recovery phase, they will be looking at re-opening their economy and tapping new opportunities.

For instance, Singapore companies may be able to serve China's domestic market, through its new "dual circulation" economic strategy which places greater focus on the domestic economy. Outside of China, Singapore can also be a good portal for Chinese companies who want access to Southeast Asia and other markets, he said.

Singapore has been China's largest investor since 2013 - a ranking Dr Balakrishnan says he expects Singapore to maintain "for some time to come".

The two diplomats also took stock of their bilateral relations, which are likely to be capped with a state visit by President Halimah Yacob later this year. The visit, originally planned last year as the two countries marked 30 years of formal diplomatic ties, was postponed because of the pandemic.

Regional issues were also discussed at the meeting, among them the developments in Myanmar, which Dr Balakrishnan described as "very troubling". - The Straits Times/Asia News Network 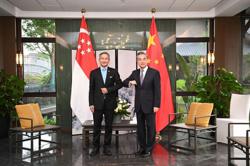 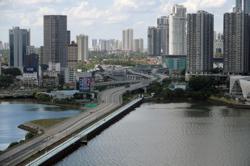