Three-dimensional bioprinting has the potential to revolutionise the practice of medicine as we know it today.

THINGS are literally ­coming alive in the field of bio-­engineering research. Current medical breakthroughs have opened up the possibilities of ­building human organs through 3D bioprinting.

So far, the technology has already enabled scientists to build tissue using live human cells. No one has succeeded yet in printing a full-fledged organ, but judging from the progress made in this field lately, it may all happen much sooner than we think. CUTTING EDGE: The Novotel MMX Bio printer prints 3D tissue in various formats. Bio-ink or hydrogel can be dispensed from each of the two print heads. — ©Organovo

“Our first tissue, a human liver model, will be released later in 2014, followed by other tissue types for this purpose.” He shares in an e-mail interview that Organovo’s primary focus is on “developing human tissues that can serve to repair, replace or ­regenerate function lost to disease and to return improved health and wellbeing” to patients.

We continue to refine the therapeutic applications for our tissues, but have shown the technology is capable of creating a wide variety of tissue types such a liver, lung, cardiac muscle, blood vessel, bone, breast and peripheral nerve, for example,” says Renard.

However, he clarifies that Organovo has yet to place any of the bioprinted tissues it has created into a human body.

The technology behind 3D bioprinting has been likened to that of inkjet printing. But instead of printing with cartridges containing different ink colours, a 3D bioprinter prints with bio-ink, which is made out of cellular materials.

These living cells are sourced from a patient and are then mixed into a culture which stimulates their multiplication and growth. Once enough cells are produced, they can be collected to form bio-ink and arranged in spheroids or any other desired shapes. 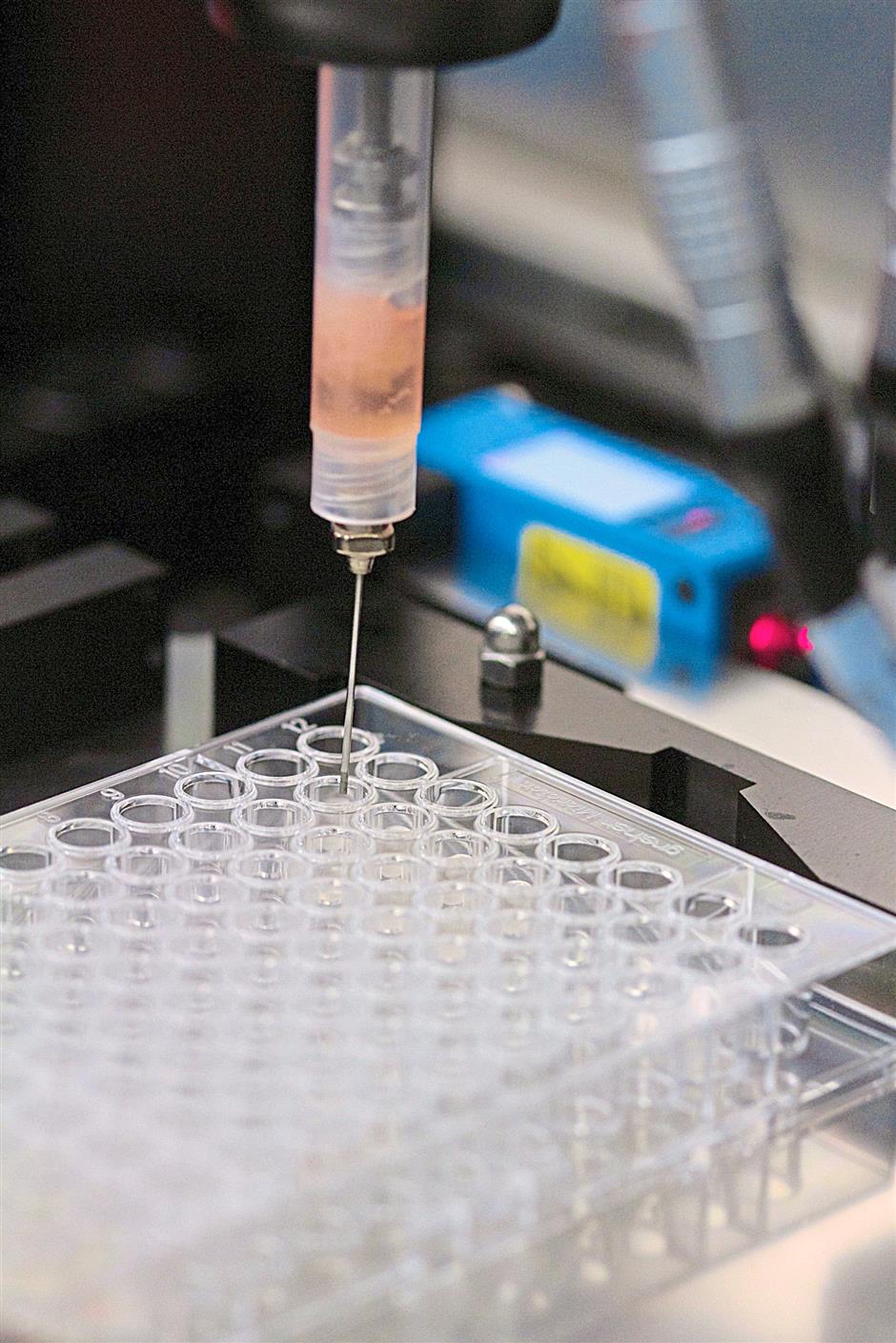 During a 3D bioprinting session, bio-ink would be printed in between layers of hydrogel, a water based gel which acts as a space holder for the tissue that is to be formed.

As time goes on, the many layers of cells will eventually fuse together. After several weeks, the hydrogel can then be removed from the mature tissue.

Bioprinters such as Organovo’s NovoGen MMX are also capable of designing tissues that comprise multiple cell types, much like a conventional printer can produce an image with several colours combined from different ink cartridges. 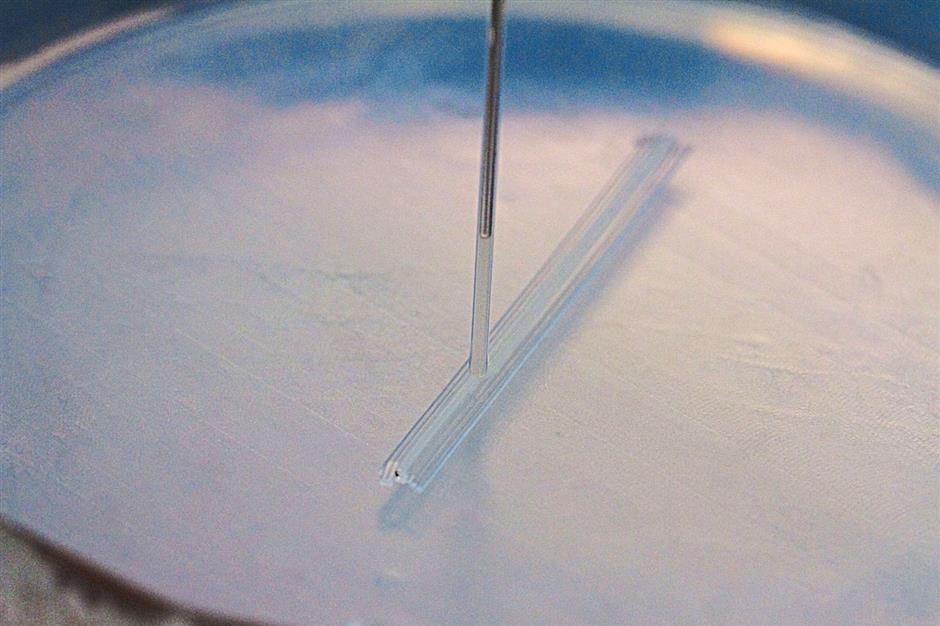 The layer-by-layer bioprinting of a blood vessel. — ©Organovo

“You cannot simply put a 3D bioprinter anywhere. You have to put it in a clean room which is dust free and maintains a certain temperature because you need to keep the cells alive. They die very easily,” says Prof Dr Fatimah Ibrahim, head of the ­centre for innovation in medical engineering at Universiti Malaya.

“This whole exercise is to ­create an environment where the ­tissue can grow,” says Dr Edmond Zahedi, associate professor from the ­department of electronics, ­electrical and system engineering at Universiti Kebangsaan Malaysia.

According to him, the benefits of 3D bioprinting include having the flexibility to create tissues of any shape and the ability to produce it within a short span of time.

It may seem bizarre to think that a clump of cells actually has the ability to integrate amongst themselves and transform into tissue. But Dr Kang Yew Beng, associate professor and director of e-learning at the International Medical University Malaysia says it all makes sense once you ­understand how cells behave.

“All individual cells are social organisms. When you put two similar cells together, chances are they will want to communicate with one another or will just stick together to form a larger mass of cells,” he says, adding that organs actually consist of cells of the same type. A team of Organovo tissue engineers working to create functional human tissues in one of its development labs. — ©Organovo

“When you take cells from a particular individual, the DNA of all those cells will be exactly the same despite the source of the cell,” Dr Kang says.

However, he adds that once cells start to specialise, their function cannot be subsequently changed. Cells from the heart cannot be altered to become liver cells later on, for example.

Although the prospects seem good that 3D printed organs may be coming our way soon, local experts believe there are still plenty of obstacles that need to be overcome before it can truly become a reality.

“The major stumbling block in creating tissue continues to be the manufacturing of vascular system to provide it with life sustaining oxygen and nutrients,” says Datuk Dr N.K.S. Tharmaseelan, president of the Malaysian Medical Association.

He also raises concerns regarding the quality and control of 3D bioprinted tissues and organs, especially when it hits the mass market. 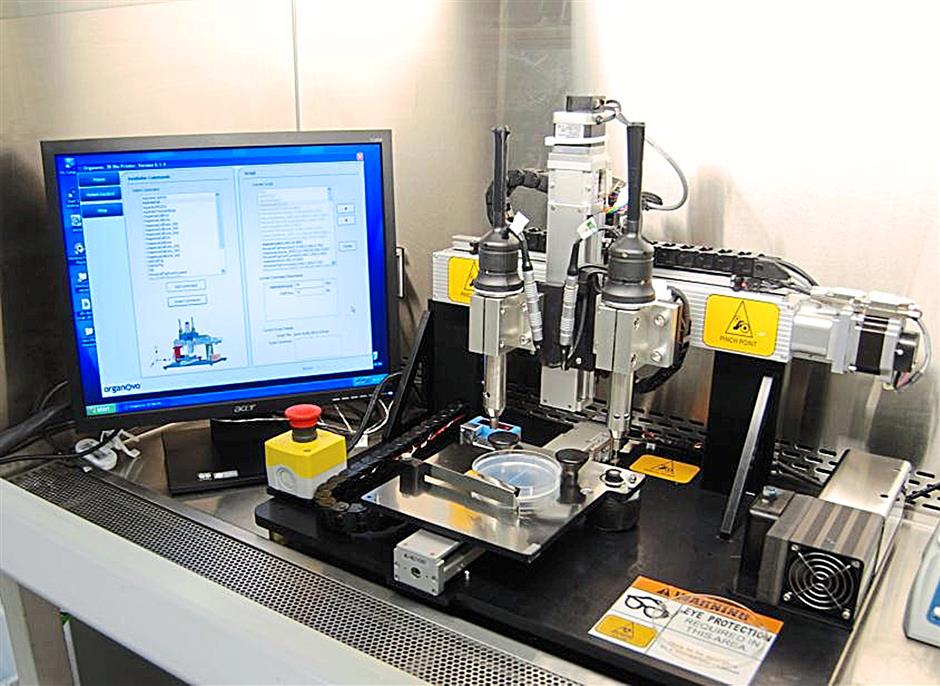 The technology behind 3D bioprinting has been likened to that of inkjet printing. — ©Organovo

“It’s more than just printing something structural,” says Prof Vicknes Waran, consultant neurosurgeon at the Universiti Malaya Medical Centre. “The human body and its organs are so complex and there’s no such thing as 100% biocompatibility. Body rejection rates will have to be overcome.”

Besides that, he says the tissues or organs that are 3D bioprinted will need to be properly sterilised before they can be inserted into the body without causing any infections. “These are clear hurdles we have to cross,” Prof Vicknes points out.

Nevertheless, he remains ­positive that researchers will sooner or later find ways to solve these issues, although he feels it may take around five to 10 years or more before the feat of creating sustainable 3D bioprinted organs is actually accomplished.

“I’m sure we can figure out how to do it. Just give it time,” Prof Vicknes says.