The human factor in floods

Yet, we also need to remember that humans have completely changed the face of the earth from natural (water absorbent and retentive) surfaces such as forests to urban (water impermeable and non-absorbent) surfaces (concrete, cement etc).

Studies have shown that if we change the land use from forest to urban, the runoff will increase more than 10 times (forest runoff averages 10% to 20% of total rainfall but urban runoff averages 80% to 90%) rendering rivers unable to cope with the huge amount of runoff entering them.

These result in much of the rain flowing on land surfaces as runoff, leading to floods.

This is the reason why Kuala Lumpur experiences flash floods every time it rains heavily although similar rainfall in surrounding areas (with forest and vegetation) do not flood.

Rivers’ drainage capacities are also significantly reduced due to sedimentation.

Studies have shown that when humans change forest to open and exposed areas (e.g. logging areas, construction areas and open agriculture areas), the rate of sediments washed into rivers (due to soil erosion) increases more than 100 times!

All the sediments are washed into rivers making them shallow. Hence, reducing the volume of water, the rivers can drain leading to frequent flooding when heavy rains occur.

Worse of all, buildings and other structures are erected right on river banks, restricting the rivers’ s ability to manoeuvre. In the deltas, sedimentation restricts flow of river water into the seas leading to backlogging of water which floods riverine areas.

In Denmark and many developed countries, governments are buying back agricultural lands from farmers to allow rivers to follow their natural course.

This will reduce flooding as rivers are able to manouevre and redistribute their energy and water in a wider environment.

Rainforests and wetlands that absorb a huge amount of rain water have been carelessly logged and totally drained for agriculture and other human land uses.

Recently, in Cameron Highlands, severe floods occurred. The main cause was due to deforestation and sedimentation of the Ringlet Lake which significantly reduced the lake’s storage capacity.

Overall, humans are the “real” cause of the current floods.

One can say that global warming and current climate change which cause more intense storms and rains (as well as stronger monsoons) are the main cause of floods now.

This may be true but global warming is largely caused by humans when we use fossil fuels and produce greenhouse gases that trap solar radiation which warms the earth and atmospheric temperatures.

So, again the root cause is human activities. To reduce flooding in the near future, we need to address the human causes of flooding.

Flood management in Malaysia is still largely dependent on structural measures (e.g. building SMART Tunnel, dams, embankments, retention ponds etc). These do not solve the root causes of flooding which are humans and their activities.

A more comprehensive strategy comprising both structural and non-structural measures (in a 50-50 ratio) will go a long way to reduce floods in Kelantan and other parts of Malaysia.

Otherwise, we may yet see more flooding of greater frequency and magnitude in future. Don’t blame floods on God or Nature! Blame it on humans! 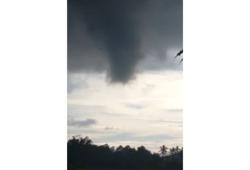