PETALING JAYA: A severed head believed to be that of Malaysian hostage Bernard Then (pic) was found near a municipal council building in Jolo island on Tuesday evening, according to southern Philippines police officials.

Jolo police chief Major Junpikar Sitin told The Star that a street sweeper found the head inside a sack with the words “Bernard Then Ted Fen” at Marina Street at Barangay Wall City in Jolo about 8.30pm Tuesday.

He said they immediately cordoned the area off and subsequently took the head away for preservation at about 10.30pm.

“We have turned over the head to the military task force for preservation and DNA tests,” he said.

Sitin said the military doctors at the brigade camp in Jolo were now preserving the head pending a DNA test with Then’s family.

However he could not tell why the 39-year-old Sarawakian engineer was executed while negotiations were going on for his release.

"We are still investigating,’’ he said adding that only a DNA test could ascertain the death of Then.

The body of Then, who was beheaded by the Abu Sayyaf terror group at about 4pm on Tuesday, was reportedly buried not far from the vicinity of Barangay Tanan in Indanan where he was mostly held during his more than six month’s of captivity.

Intelligence reports from Jolo indicated that Then was executed by the Abu Sayyaf faction led by Idang Susukan in Indanan following a week-long deadline given to meet the demand for higher ransom that was made during the release of Sabah restaurant owner Thien Nyuk Fun on Nov 9.

The reports also stated that the beheading occurred when the Philippines military intensified its operations against the Abu Sayyaf in the Indanan area.

Brigadier-General Alan Arrojado, commander of the Joint Task Group Sulu, who had confirmed that Then was beheaded, also stated that the body was immediately buried in the vicinity of where the beheading took place.

He also said that the beheading occurred as the military launched an artillery attack on the hostage-takers' position in Jolo.

Arrojado said efforts were now being made to locate Then's remains.

Then was grabbed along with Sabahan Thien Nyuk Fun, 50, from the Ocean King Seafood Restaurant in Sandakan on May 15. Thien was released on Nov 8 and has kept a low profile since her return to Sabah as she recovers from the ordeal.

Susukan’s group which also included Abu Sayyaf  sub commanders Alden Bagade, Angah Adji and Ahabsy Misaya had been insisting on a full ransom payment of 60 million pesos (RM5.6mil) for the two hostages instead of 30 million pesos (RM2.8mil) which was purportedly paid for release of Thien. 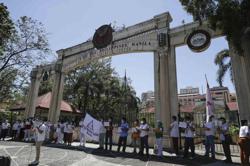