Too bad, they don’t know it’s a wombat

Wising up on wombat: The wombat mascot of Servcorp that was mistaken for a a pig.

PETALING JAYA: Do you know what’s a wombat? Some Malaysians apparently don’t.

The Kuala Lumpur City Hall (DBKL) has had to temporarily remove a wombat advertisement from an electronic billboard at Bukit Bintang because people were mistaking it for a pig.

Mayor Datuk Ahmad Phesal Talib confirmed the removal of the digital advertisement at Jalan Bukit Bintang, while DBKL was trying to get in touch with the company behind the advertisement to confirm the fact.

Ahmad Phesal agreed that the animal in the advertisement was a wombat.

Wombats, incidentally, are marsupials, like kangaroos, wallabies and the koala bears.

“An irresponsible person perceived it as a pig and spread false rumours on the Internet which led to the public misconception,” he said in an interview.

There was a public uproar on social media after a screenshot of the wombat went viral describing the advertisement as a “pig wearing a songkok and baju Melayu while accompanied by a Selamat Hari Raya greeting”.

It has been established that the wombat is the mascot of Servcorp, an Australia-based company offering serviced offices in the region. 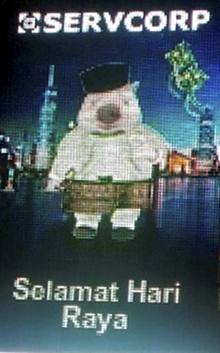 The digital billboard of the wombat in KL.


The cartoon wombat is normally depicted wearing a hat with a cream-coloured coat and brown pants in the advertisement, and even has a name: Sidney.

Sidney has been touted by Servcorp as the “world’s wisest wombat”, and it even has its own Facebook page as well as website.

Servcorp, which used the same mascot in the digital advertisement in a promotional video in 2012, could not be contacted yesterday.