PETALING JAYA: Consumers have been cautioned not to fall for sales gimmicks by retail outlets which claimed not to charge the Goods and Services (GST) come April 1 as they could actually be enjoying hefty margins now.

Tax experts said these retailers have the capability to absorb the GST in their bid to keep prices down.

However, the law does not permit anybody to absorb GST.

Retailers are required to state both the retail price and GST amount to allow consumers to have a clear idea on what they are paying for.

An accountant noted that only companies or retail outlets that enjoy high margins have the capability to absorb GST.

“Big retail outlets that are enjoying high margins are capable of absorbing the 6% tax, but it would lower down their margins,” he said.

“But small-sized retailers may not be able to absorb GST for their customers,” he added.

He explained that GST covers the whole spectrum of the supply chain including retailers and wholesalers, which is different from the current Sales and Service Tax (SST) system that accounts for the initial price of goods.

However, he noted that the biggest hurdle for retail outlets is to prepare themselves for the GST implementation

“This is because businesses need to list down its input and output GST to file its returns, hence they need to fork out capital to set up the infrastructure,” he said. 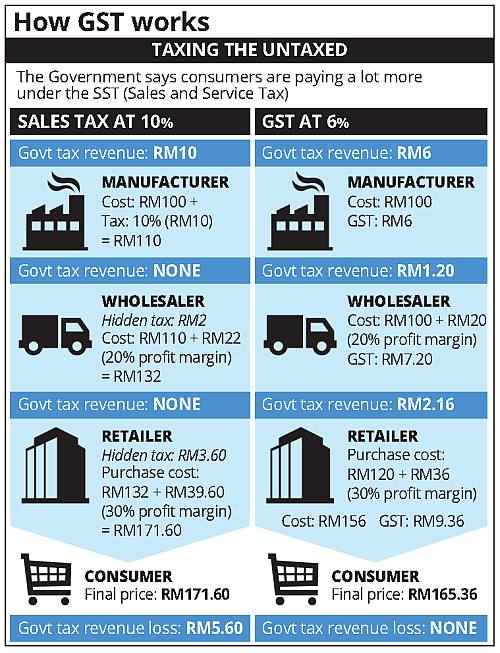 Experts claimed that costs of doing business would go down with the GST, resulting in increased competitiveness of their goods.

This is because under the GST regime, retailers are able to claim back their input tax, compared to the current SST system.

An accountant said that items such as electrical goods that currently have a 10% SST embedded in their prices would see some reduction in prices under the GST.

“Items that are subject to SST currently are expected to benefit from lower GST rate of 6%,” the accountant said.

He said that with GST, businesses could benefit from input tax claim as compared to the SST regime.

The SST system has a “cascading effect” that causes business to pay a lot of taxes, where prices of goods contained hidden costs accrued along the supply chain, he said.

“With the GST, businesses can benefit from recovering input tax,” he added.