PUTRAJAYA: The defence in Datuk Seri Anwar Ibrahim's appeal has questioned whether there was penetration in the alleged sodomy case, as Mohd Saiful Bukhari Azlan's testimony was inconsistent with regards to the existence of a commonly-used sexual lubricant.

Lawyer Datuk Seri Gopal Sri Ram, a former Federal Court judge, argued that according to the evidence from the complainant Mohd Saiful at the High Court, the act was vigorous and fast and he suffered pain in his anus and stomach.

Submitting before a five-member panel of the Federal Court chaired by Chief Justice Tun Arifin Zakaria on Tuesday, Sri Ram said if that was correct, then the lubricant could not have been used because it was to facilitate penetration and prevent pain.

He pointed out that the medical evidence had confirmed that no trauma or injury was found in Mohd Saiful's anus.

Sri Ram further said the lubricant was not mentioned in the list of exhibits recovered from Mohd Saiful, who was the prosecution's first witness in the sodomy trial.

"The absence of lubricant from the list casts serious doubt on the credibility of Mohd Saiful, and lack of credibility in the prosecution's case and the entire investigation," he said, adding that Mohd Saiful had not mentioned using it in his police report.

At this juncture, Justice Arifin asked Sri Ram why he said there was a lack of credibility, to which he replied Mohd Saiful would not have suffered pain if the lubricant was used.

Sri Ram submitted that the learned trial judge did not address the issue at all despite strenuous cross-examination on the use of the lubricant by lawyer Karpal Singh.

He said the lubricant was an important exhibit but had only appeared during examination-in-chief by the prosecution on Mohd Saiful.

Sri Ram added that Mohd Saiful had told the court that he bought the lubricant before proceeding to the condominium. 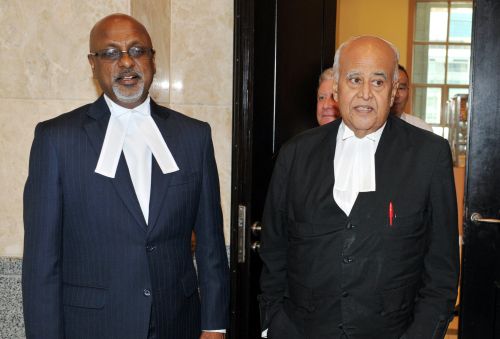 According to Sri Ram, Mohd Saiful in his testimony said that the semen stayed in his anus for several days. However, when cross-examined by Karpal, Mohd Saiful said he did not take a bath after the incident and only rinsed his body.

Mohd Saiful later said he had taken a bath in the morning prior to the incident. "It shows inconsistency in his testimony," Sri Ram added.

On Jan 9, 2012, the High Court acquitted and discharged Anwar of sodomising Mohd Saiful, 27, on grounds that the Court could not be 100% certain on the integrity of samples taken for DNA testing from the alleged victim.

The Court had ruled that the samples could have been compromised before they reached the Chemistry Department for analysis.

However, on March 7 this year, the Court of Appeal overturned the High Court’s judgement and found Anwar guilty of sodomising Mohd Saiful.

The Court of Appeal held that the trial judge had erred in his findings about the samples which were based on the evidence of two expert witnesses called by the defence.

Anwar was sentenced to five years’ imprisonment for the offence allegedly committed at Unit 11-5-1 Kondominium Desa Damansara, Jalan Setiakasih in Bukit Damansara between 3.10pm and 4.30pm on June 26, 2008.

The charge under Section 377B of the Penal Code, carries a jail term of up to 20 years and whipping, upon conviction.

This is the second sodomy case against Anwar. - Bernama