Due recognition for man behind Malaysia's postcode system PETALING JAYA: It has been 28 years since he left the civil service but the man behind Malaysia’s postcode system has finally received due recognition for his contributions to the nation.

M. Rajasingam (pic), 83, who retired in 1986 after being the director-general of Pos Malaysia for 10 years, received the Darjah Panglima Jasa Negara (PJN), which carries the title of “Datuk”, on Saturday from Yang di-Pertuan Agong Tuanku Abdul Halim Mu’adzam Shah. During his tenure, Rajasingam, was responsible for many innovations in the postal service.

Asked how he felt about being recognised after so many years, Rajasingam said he did not expect anything in return for performing his duties.

“I did not canvass for any titles, I just did my duties but I am glad to receive it this time,” the father of two said yesterday.

Apart from establishing the national postcode, he also introduced the mini post offices and made it mandatory for letterboxes on the ground floor of high-rise buildings.

“Back then, only Kuala Lumpur had a postcode, but I wanted it for the whole country.

“My predecessors were not keen in doing such a big project so when I took over as the director-general in 1976, I led a committee to get it started.

“As I was close to the French postal authorities, they agreed to send an officer to help us formulate postcodes for all parts of the country,” said Rajasingam.

He said although a lot of hard work was put into the framework of the national postcode, it was necessary to ensure easier postal operations.

He said the system made the process of sorting out mail smoother, as it was easier for machines to recognise the numbers.

Rajasingam joined the Postal Services Department in 1956 as an Assistant Controller of Post.

After retiring, he read law and was called to the Malaysian Bar in 1994. In 2002, he suffered a heart attack and was in hospital for several months.

“I couldn’t walk and I had to start all over again. It took a lot of willpower and I started working from home,” he said.

These days, Rajasingam spends his time reading, gardening and writing articles about his experiences in legal practice. 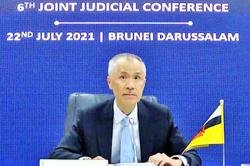