PETALING JAYA: Heavy rain on Monday evening, coupled with after work traffic resulted in massive traffic jams along most roads in the Klang Valley.

According to LLMinfotrafik and KL Traffic Update’s tweets, several roads, including the Sprint highway from Section 16, Petaling Jaya and Bulatan Dato Onn heading towards Parliament building, were flooded, resulting in traffic congestion.

Traffic from Bandar Utama to Taman Tun Dr Ismail and from Kelana Jaya to SS2, Petaling Jaya was also at a crawl. 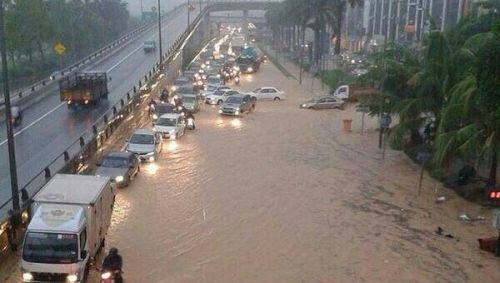 Traffic on the MRR2 from Bukit Jalil heading towards the city centre, Subang to Dataran Prima and Kota Damansara, as well as the Kerinchi Link towards the Federal Highway was also slow moving.

Traffic on both sides along Jalan Hang Tuah was at a standstill, as was the traffic from Bandar Sunway heading towards the Kewajipan roundabout.

In Serdang, flash floods forced 30 primary school students to be vacated from their school.

"The water had risen about two feet, so we had to vacate the students from Sekolah Kebangsaan Sri Serdang to the Sri Serdang Rukun Tetangga hall," he said.