Caught up in the selfie craze

Selfie a la Oscar: Inspired by the Ellen DeGeneres Oscar selfie that went viral, KDU University College students are seen posing for a group selfie at their campus in Petaling Jaya. John Lai, 19, is taking the group selfie of his college mates.

Petaling Jaya, George Town and Kuala Lumpur have made headlines after being declared Time magazine’s top selfie cities. Sunday Star takes a look at this self-loving phenomenon that has taken the digital world by storm.

Dubbing it the “biggest trend on social media today”, Noor Farah Noor Azmi, 19, says selfies are driven by the “me generation” (millennials or Gen-Y born between 1977 and 1997). 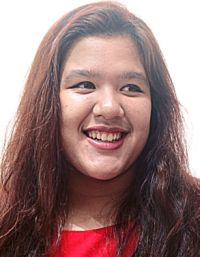 Noor Farah: Selfies are all about capturing the right moment.

Selfies, she explains, are all about capturing the “right moment”.

With selfies, you can be sure that the “photographer” will do a good job because you know your best angle better than anyone else, she says.

“Besides, if you ask someone to help take the picture, most of the time they will just snap without bothering too much about how you look.”

The most number of selfies she has ever taken in a day is 50, and this was when she was at the Comic Fiesta at KLCC in December last year.

“I was on selfie mode because I was wearing a wig. However, I only posted three of my best shots,” she shares.

“My favourite selfies, though, are usually taken in my bedroom because the wall colour really complements my skin tone.”

Aloysius Lim, 19, who admits to taking daily selfies “so there’s no escaping my face”, says people usually look their best before they leave the house.

“Your hair is in place and you’re not all sweaty so that’s the best time for a selfie,” he offers.

With selfies, one never has to feel awkward about making funny poses, he says, adding that the subject can even try as many different angles as possible without feeling shy.

For cosplay enthusiast Adam Abdul Majid, 30, selfies are more a tool than a display of vanity.

“I use it to check my cosplay make-up and wig. Adam: Gets feedback from cosplay participants on his costume.

“By taking a selfie in costume, I can get other cosplay participants to comment and share their tips to get my character’s look right,” he says.

As much as she enjoys snapping herself in her “outfit of the day”, Denyse Chan, 19, draws the line at distasteful selfies with backgrounds that capitalise on unfortunate events like an accident or fire.

She says badly-taken selfies are also a no-no.

Agreeing, Adam feels that the purpose of a selfie is “to make you look good”.

“So, always do yourself justice with a good selfie.”

Low Yin Yee, 18, who says selfies account for 90% of what her friends share on social media, usually takes selfies when she is dressed to the nines.

“It starts off with me looking in the mirror and thinking: ‘Wow, I look good. I need to remember this moment because I don’t look this good often’,” she says, laughing.

Christy Ng, 22, has been taking selfies since she was 12 – long before it was considered cool and way before most smartphones had front cameras.

Back then, the “mirror and back camera selfie professional” managed to get the right angles through trial and error.

It’s so much easier to get a nice selfie now, she admits.

Her pet peeves are pointless captions that “don’t relate to anything” and selfies accompanied by song lyrics.

“Selfies are also convenient and useful when you want to show people where you are and what you are doing,” she points out.

While selfies can be a safety tool, Adam warns that social media users should also be smart about what they post because it can be a “double-edged sword”.

Despite knowing that Malaysians love taking photos of themselves and posting them on social media, the motley crew from Johor Baru, Perak and the Klang Valley still found it “surprising and unexpected” that Petaling Jaya (fifth) and George Town (10th) were among Time magazine’s top 10 cities that produce the most selfies in the world. Kuala Lumpur was at 21st, making it to the top 100.

“We take lots of selfies but we don’t post them all,” they chime in agreement.

Noting that online presence is an increasingly important part of how people express their identity, Monash University Malaysia (school of arts and social sciences) lecturer Dr Julian Hopkins says selfies are taken for two main reasons – as a mirror of how someone wants to look to the world or as a narrative of his or her daily life.

The fact that selfies are popular globally suggests that they tap into basic social needs like wanting to know what others are doing, what they think of you, and (telling others) what you are doing, he observes.

“(The selfie trend) is closely related to the growth of camera phones but self-portraits have been a common practice amongst painters for a long time.

“(However) the low cost and simplicity of sharing digital photos have made it into a new form of non-verbal communication,” he says, adding that selfies make it easy to interact and maintain networks with people who you don’t fancy spending time with offline.

Selfies with homeless people and at funerals, he cites, are some worrying examples of how selfies can be potentially disrespectful. Ng: Taking selfies since she was 12 – long before it was considered cool.

Since November last year when the social media buzzword was inducted into the online version of the Oxford English dictionary and defined as “a photograph that one has taken of oneself, typically taken with a smartphone or webcam, and uploaded to social media”, the selfie has taken the cyber world by storm.

There are currently more than 1,000 selfie groups on Facebook alone.

According to an American Academy of Facial Plastic and Reconstructive Surgery survey, one in three plastic surgeons reported seeing an increase in requests for facial procedures by patients who wanted to look better online.

The selfie craze is so big that even PKR president Datuk Seri Dr Wan Azizah Wan Ismail, 62, found it impossible to ignore.

The grandmother, who made full use of “what the young people want” in her Kajang by-election campaign to woo younger voters, asked those wanting a selfie with her to upload the pictures online.

The global legion of selfie fans include comedian Ellen DeGeneres whose photograph with Hollywood royalty at the 2014 Oscars was one of the most memorable images of the 86th annual Academy Awards, helping to attract a record-breaking number of viewers during the March 2 live telecast.

The popular picture, which has since inspired Netizens to superimpose themselves into the group, was not a super airbrushed image taken by a professional photographer but was instead a selfie snapped by actor Bradley Cooper on a Samsung Galaxy Note 3 phone.

Recently, amid mounting interest on the missing MH370 Malaysian airlines flight, a selfie of Twitter user Hannah Udren, 18, in front of a grounded aircraft with its nose faced downwards into the dirt, was re-tweeted nearly 2,000 times in the first hour of being posted on March 14, The Independent in London reported.

The selfie has since gone viral.

Defending herself against online backlash for the selfie, she explained that it was posted to show her parents that her plane had crashed during take-off.

Even on March 8, the day MH370 went missing, curious individuals were spotted snapping selfies outside the Kuala Lumpur International Airport holding area where families of those on the flight and the media were gathered.

Other interesting selfies that made their way onto the social media recently were of a student smiling next to a human cadaver during a class field trip and an air force pilot photographing himself just as a flaming missile is released from his fighter jet.

The selfie trend can also help to raise funds, as happened in Britain last week when a “No make-up selfie” campaign helped a cancer charity to raise £1mil (RM5.3mil) in 24 hours, according to reports in the British media.

The campaign, which began on social media on Tuesday afternoon, asked women to post photos of themselves online without make-up, with the hashtag #nomakeupselfie. It seems to have begun with author Laura Lippman who posted a picture of her bare face in support of actress Kim Novak who was criticised for her looks, but has since become associated with charity Cancer Research after people began adding the hashtag #breastcancerawareness to the selfies, according to an online article by The Telegraph. 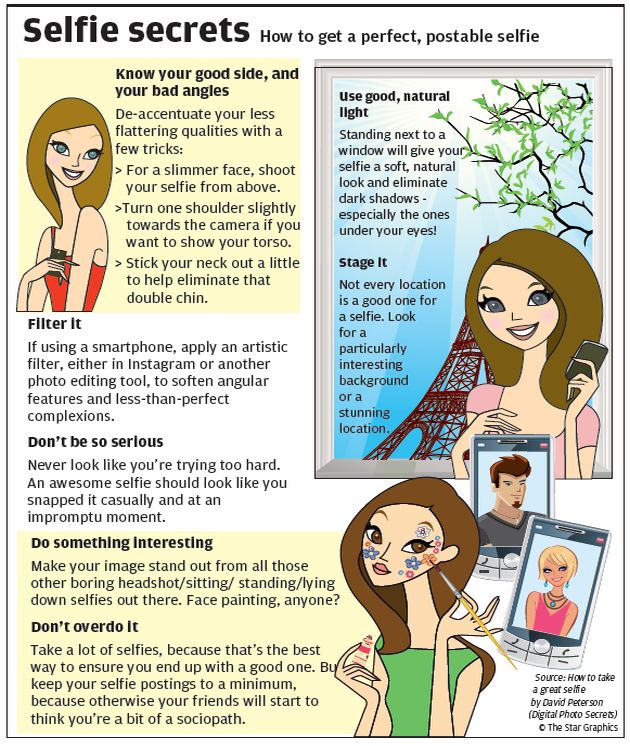