The highest API was recorded at SK Jalan Pegoh in Ipoh, Perak at 124 while Cheras, Kuala Lumpur reached 107, breaching an unhealthy level, followed by Nilai, Negeri Sembilan at 96, 95 in Banting, Selangor, 87 in Putrajaya and 86 in Seremban, according to its website.

Other API readings recorded were 83 in Malacca city, 72 in Sri Aman, Sarawak and 71 at both Bukit Rambai, Malacca and Jalan Tasek Ipoh, Perak as at 5pm yesterday.

The Meteorological Department in a statement on Monday had said that volcanic ash from Mount Sinabung, which erupted over the weekend and again on Monday, could be blown towards the southern states due to a northwesterly wind.

An advisory by the department had been sent to the aviation industry as the ash could affect flights and reduce visibility.

The peak of the volcano located in north Sumatra is 2,450m above sea level. AFP reported that 15 people were killed when Sinabung erupted over the weekend, shooting hot ash and rocks into the air.

Local authorities had evacuated about 30, 000 people.

Sinabung, which had been sporadically erupting since September, is one of 129 active volcanoes in Indonesia.

The department said that there was no significant effect on air quality due to the ash cloud from the Sumatran volcano.

46 hotspots were also detected nationwide by the NOAA-18 Satellite and shown on the Meteorological Service Singapore’s website as at 4pm yesterday. 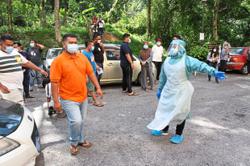