An ugly duckling no more

Cool hangout : The Women, Family and Community Development Ministry office at UTC Pudu is a hip place for children to hang out at while their parents visit the various government agencies housed under the UTC’s roof.

Those who visited Pudu Sentral recently are impressed with the new Urban Transformation Centre that houses various government departments under one roof.

IT has been more than 30 years since 48-year-old Jonathan has been to Puduraya. Back then, he was there to catch a bus out of the state. And he remembers the dust, noise and heat.

Recently, he found himself back at a much changed Puduraya – now known as Pudu Sentral – with his wife Kelly and their two daughters, Sabrina and Nicole.

The long distance buses and taxis that leave from Pudu station are still there. But above the bus terminal, the place is all spruced up.

It now houses one of the Urban Transformation Centres (UTC) in the country, which brings key government ministries, departments and private sector agencies under one roof, making it convenient for the people who need their services.

Jonathan and his family were at the immigration department branch at UTC KL during the recent school holidays to get the girls’ passports renewed for a trip to Singapore.

“One of my nieces told me about the immigration office here. She said the service is quite fast which is why we decided to come here,” he said when met at UTC while waiting for their number to be called. Jonathan and his family, Sabrina (in pink), Nicole (in black) and wife Kelly at the Immigration Department.

Kelly said they had to wait quite a while because of the school holidays as many people were applying or renewing their passports then.

“It would be good if there were more seats,” she suggested. “And a shopping centre would be great too so that we can shop while waiting for our turn.”

Other than the immigration department, the National Registration Department (JPN) and the Road Transport Department (JPJ) at UTC are also popular with the public.

There is an IRB office for those with tax queries and an EPF kiosk to assist those who wish to get updates on their savings or name their beneficiaries. The National Higher Education Fund Corporation also has an office here for students or graduates to discuss or pay their PTPTN student loan.

The best thing about the UTC is that it is open seven days a week from 8.30am till 9pm, which is good for those working because they would be able to get things done after office hours or during the weekends.

Among those spotted at the UTC were Anum Aznur Ahmad Basrah and her fiancé Nik Mohammad Firdaus who managed to get time off work to apply for their new MyKad. 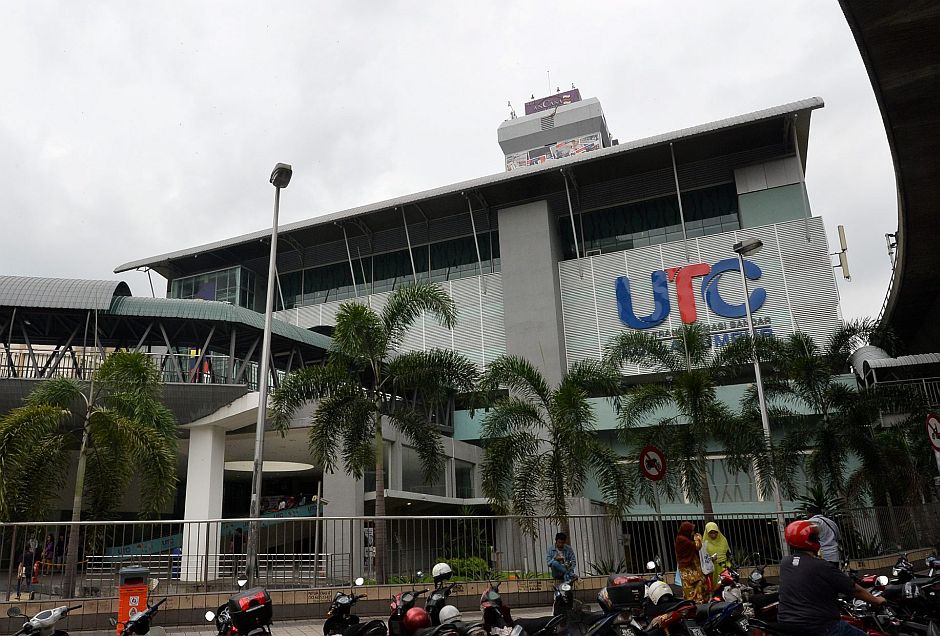 One-stop centre: The UTC is open seven days a week and is convenient for the working populace.

Initially, Nik Mohammad had wanted to go to the JPN office in Petaling Jaya but his friends who had theirs processed at the UTC in KL recently, suggested the place because “it is a lot more comfortable and quicker.”

“Previously, I wouldn’t have dreamt of setting foot in Pudu because it (the condition) was so teruk (bad). But looking at it now, it’s quite pleasant, “ he said.

“This is something good that the government has done. It’s convenient for us as I can come in the evenings or even on a Sunday,” said Kannan, a runner for taxi drivers to get their permits renewed at the SPAD (Land Public Transport Commission) and JPJ office here.

“And because it is not as crowded, I can leave the things I want renewed at SPAD or JPJ and call them up later to see if it’s ready. That saves me time,” said Kannan who was at the post office at UTC to buy a postal order.

And it is not just all business at UTC. The Women, Family and Community Development Ministry office offers a cosy place for youngsters to hang out or study. It even has computers with free Internet access.

“We think it’s better for the children to be here surfing or playing games under our supervision than lepak (loafing around) outside with unsavoury characters,” said a ministry staff.

Every Monday morning, a nurse comes by to give free Human papillomavirus vaccinations to young girls. For those who want to relax, there is also a spa at the ministry office and a foot reflexology room.

Elly, who runs the foot reflexology centre, said not many people know of their existence. The centre’s three blind masseurs are paid a fixed salary of RM1,050 a month and an additional RM10 daily for lunch. They are actually employed by Bina Puri, a construction company, which is starting to venture into the wellness industry.

There is also a rooftop gym and futsal court at UTC KL.

Shamsul Anwar Adnan who runs the ‘Y Centre’ sports facilities under the Youth and Sports Ministry said the public were charged a nominal fee.

The fee at the gym for adults is RM5 and RM2 for each subsequent hour while for students, it is RM2 for the first hour and RM1 for subsequent ones.

The futsal court fee is RM60 an hour.

“It is a full-sized court and always fully booked in the evenings. Ours is about half the price of what you’d pay outside,”said Shamsul.

There is also a table tennis table and it is free but you have to bring your own bats and ball. There is also free WiFi, lockers and showers.

In November and part of December, the Y Centre was closed temporarily for roof repairs.

Shamsul said tourists staying in the area would also drop by to use the facilities but they were charged RM15 for the first hour and RM50 for each subsequent hour.

On the disparity in rates for locals and foreigners, Shamsul said the facilities offered were actually meant for the locals.

“We want to promote health and the benefits of exercising to our people, this is why we are offering the facilities for cheap. But if foreigners want to use the facilities, it is only right that they pay more,” he said.