One man’s mission to save mankind by teaching us to love our beautiful planet.

FOR over 40 years, Yann Arthus-Bertrand has photographed the Earth from where few have – from way up high. From this vantage point, he has given us amazing views of the planet. But he has also seen it change, felt its fragility, and witnessed the imprints left by man.

Which is why he is on a crusade to reshape man’s perception of Earth, in the hope that they will change their destructive habits which are wounding the planet.

“From the air, the planet is a piece of art. Each time I fly, I’m amazed at the beauty of the planet but appalled at the impact of man on it,” Arthus-Bertrand said at a press conference held in Manado, Sulawesi, in mid-June.

Though he started out as a photographer, Arthus-Bertrand is today better known as an eco-activist. His documentaries and books all serve to encourage environmental awareness. The aerial shots from his 1999 book The Earth From Above and subsequent exhibitions worldwide enabled us to see the Earth like never before.

His landmark 2009 film, Home, gave us not only spectacular bird’s-eye views of the landscapes that shape our planet but also scenes of how human habitation has destroyed nature. In 2011, he directed two films for the United Nations: Forest, to mark the 2011 International Year of the Forest, and Desertification. 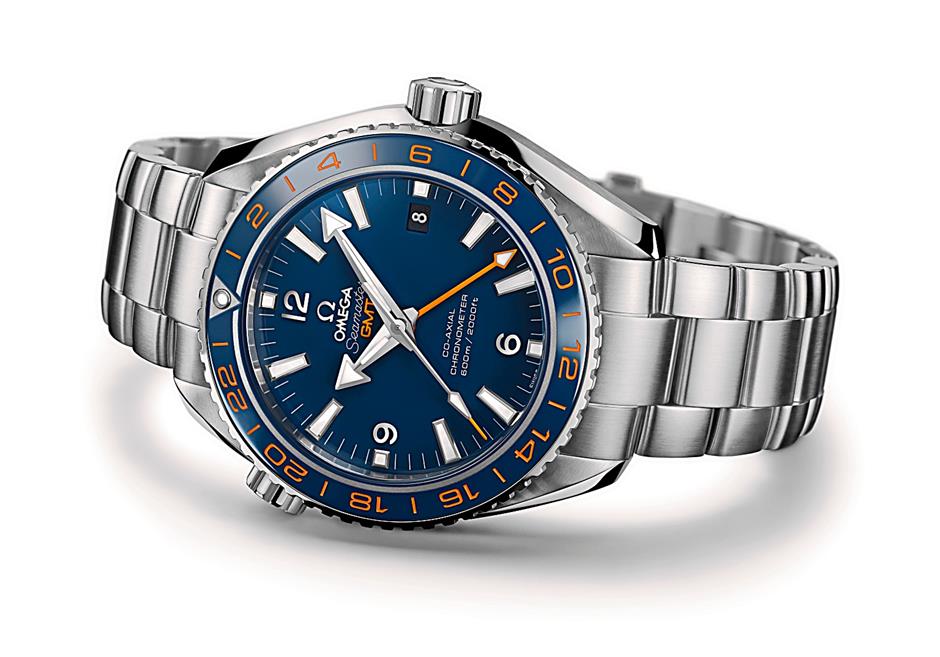 Proceeds from the sale of Omega's Seamaster Planet Ocean are funding two conservation projects in Sulawesi.

In 2012, Planet Ocean, about the beauty and importance of the habitat that covers two-thirds of the Earth’s surface, premiered at the Rio+20 Earth Summit in Rio de Janeiro, Brazil.

“My purpose was to show the beauty of the oceans, their diversity, their usefulness, and also the threats that hang over them today and the solutions that can be applied. Because mankind is both the cause and the cure for all the problems,” says Arthus-Bertrand, 68.

For his work in inspiring and encouraging action, the United Nations Environment Programme has appointed him its Goodwill Ambassador.

In September, Arthus-Bertrand will start filming a new eco-documentary, Terra.

“It will be about life on the planet and about biodiversity, with a focus on vertebrates. Some 98% of vertebrates is man and domestic animals. The others, such as elephants and birds, are only 2%. Today, it’s difficult to think about nature without putting man in the middle. We are animals and now there is little place left for other animals.”

The film will be aired on Dec 15, 2015, in Paris at the United Nations meeting on climate change. And just like his previous works, the new film will not be copyrighted, and will be available free to all.

As a teenager, Arthus-Bertrand, who comes from a family of Parisian jewellers, dreamt of becoming a film star. He started out as a third assistant director and even acted in several films, but a career in the movies eluded him.

At the age of 20, a love for animals saw him becoming the director of a nature reserve in central France. He moved to Kenya with his wife in the mid-1970s to study the behaviour of lions in the Masai Mara reserve.

There, he picked up photography as part of his survey work. At that time, he was also earning money flying tourists in hot air balloons. The two things came together, flying and photography, and that was how he found his calling as an aerial photographer.

He wrote for various publications, including Géo, National Geographic, Life and Figaro Magazine, and quickly learnt that his pictures could spread awareness of ecological issues and move people to get involved and make a change. He started making films which portray nature in all its glory as well as examine the links between man and nature.

“The key is to show the beauty of the planet, and thereby promote love for it”, is Arthus-Berstrand’s philosophy to urge people to be personally responsible for the future of the planet.

In the course of his filming, he met many scientists and learnt about how ecosystems were unravelling, and realised that just making evocative films about Earth was not enough. This urge to do more compelled him to set up the GoodPlanet Foundation in 2005. The Paris-based body promotes solutions for sustainable development and lifestyles. It has 25 projects worldwide on renewable energy, sustainable agriculture, waste management and forest conservation.

“It’s nice to shoot pictures but it’s also important to be in the action. I see so many NGOs doing work on so many issues, on poverty, on women, on children. I was impressed and I wanted to be part of this family that is doing things.”

In 2011, the foundation teamed up with Omega to promote conservation of oceans. The Swiss watch maker has committed a portion of the proceeds from the sale of its Seamaster Planet Ocean 600M GoodPlanet to fund various ocean-related projects by GoodPlanet. Their first collaboration was the documentary Planet Ocean and their latest endeavour is to preserve mangroves and seagrasses in Sulawesi. 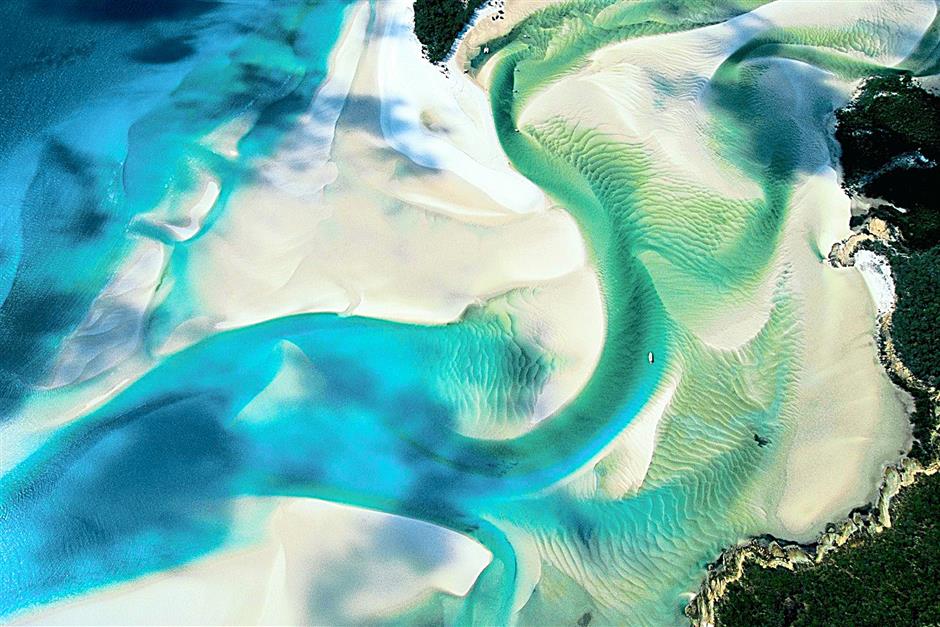 Sandbank on the coast of Whitsunday Island in Australia's Great Barrier Reef. The 7km-long beach of Whitehaven is famous for its soft white sand composed of 98% pure silica. – YANN ARTHUS-BERTRAND

Though knowledge of the plight of the planet has grown in recent years, Arthus-Bertrand says there remains a gap between knowing and believing.

“We live in denial. We don’t want to believe what we know. The truth is, we’re going to disappear if we continue like this. We are now seven billion (people). Our impact on the planet is big. We need to understand that we cannot continue to live like this. Everybody wants to consume and be rich. People in the Third World, they also want to consume.

“There is a lot of scientific progress but all the solar farms and windmills will not replace the 85 million barrels of oil that we consume each day. What we need is a revolution, not a political, economic or scientific revolution, but a spiritual and morale revolution. We have to learn to live with less.”

Presently, he is finalising a film called Human. “It is about humanity, not at all about ecology. There is aerial photography, but no commentary, with people talking about their lives and what they want.” The film will be launched in September at the UN General Assembly in New York City.

His films have won numerous prizes but it is the responses of his audience which give him satisfaction. “The best time is when you show the movie and children ask questions, and people understand what you want to share with them. And it’s nice when you don’t have to make concessions (in the films), you say what you want to say.”

He admits to the enormity of the world’s ecological problems, but remains unfazed. His approach is to do what he can, in his own way, as reflected in the films he chose to make and the projects undertaken by his foundation. He has also become a responsible consumer – he is a vegetarian and gives priority to ecological and social qualities in his purchases.

He also takes personal responsibility over the carbon that is emitted when he flies the world for his work (aviation contributes between 2% and 3% of global carbon emissions). He offsets his carbon emissions by supporting biogas projects in India, where cattle manure is turned into gas for energy.

“If there is no solution, I would stop flying completely. There are one billion people taking the plane every year. When you take the plane, you send CO2 out to everybody, to your family also. But very few people think about that. But if everyone pays a little bit of money to do carbon offset, we can change over completely.

“People must be aware that they each have to be personally responsible for the future of the planet. Everybody can do something,” he says.

To promote responsible consumption, the GoodPlanet Foundation has produced a smartphone app to help consumers select sustainably caught or farmed fish. The app lists 100 species of fish and shellfish according to their origin, the state of their stock and their fishing techniques. Download the app at http://bit.ly/PlanetOceanAppAndroid or http://bit.ly/PlanetOceanAppIOS.

Bahoi: A marine reserve that works