The statue, built in front of the Ramayana Cave, includes a 27.4m horse-drawn chariot with mini fountains.

The statue was built despite a stop-work order for a cable car project by the Selayang Municipal Council (MPS).

The order was to prompt the temple management to submit applications for 20 existing illegal structures in the popular tourist attraction.

The management unveiled the statue on Jan 14.

In a local Tamil daily, it was reported that the temple chairman, Tan Sri R. Nadarajah, was inspired by a similar statue he had seen in Jakarta and decided to build it here.

When contacted, MPS confirmed that the committee did not apply for the necessary approval to build the statue. 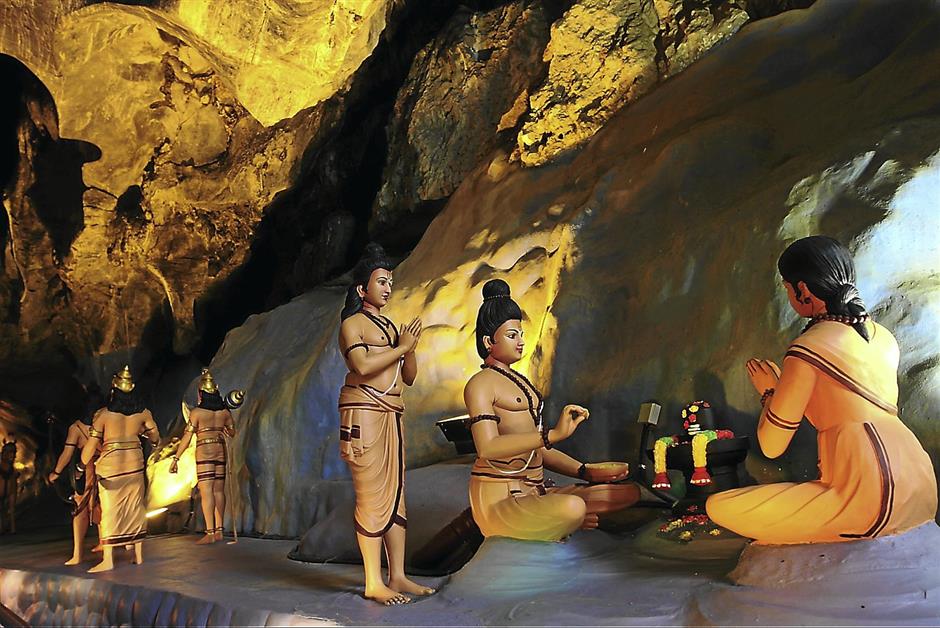 Old statues that have been given a new coat of paint.

“We did not receive any application to build the statues and as such, it is deemed illegal. In fact, it has become a norm for the committee to submit applications for big projects only,” he added.

To make matters worse, the temple committee is charging RM10 per person to visit the Geetha Upadhesa (Krishna statue and chariot), The Ramayana Cave and the Suyambu Lingam (self-formed Siva Lingam).

Visitors to the Ramayana Cave during the Thaipusam festival last weekend were shocked over the charges.

Elangovan Annamalai, from Kuala Lumpur said the temple should disclose the accounts for the money collected.

“What is the money being used for? The upkeep of the caves is really bad. The staircase leading up to the Suyambu Lingam is steep and there is no railing to hold on to for safety,” he added.

However, Elangovan said the statues inside the cave that narrated the Ramayana epic is a good idea and helps the younger generation learn about it.

“Although their efforts to educate is good, I am worried about safety aspects.

“The roof does not look sound and there is a section cordoned off for renovations,” he said.

He said no further construction should be carried out until tests are carried out to determine the ground conditions.

Another visitor, who only wanted to be known as S. Selvaraj, said as a frequent visitor he had never seen the statue before.

“It is so big and hard to miss. It looks like it was just built.”

Ahmad Fauzi said the council is currently in the process of legalising all the illegal structures and had asked the temple committee to submit the necessary documents.

He said the statue was an upgraded version of an existing statue and merely an aesthetic improvement.

On why he had allowed the aesthetic improvement without approval from MPS, he said there was nothing wrong in repainting the statues.

“Just because we are waiting for approval, it does not mean that we cannot paint the statues?” he said.

Nadarajah said that after the council had issued a stop-work order for the cable car, they have not pursued the matter.

He said they had an excellent relationship with the council and were cooperating fully.

“Some people are spreading lies about the situation but everything is under control,” he said.