The US space agency plans to put a huge space rock in orbit around Earth’s moon in preparation for future manned missions to the red planet.

Calling the ambitious project "Asteroid Redirect Mission", NASA is aiming for a December 2020 lift-off for an unmanned craft to capture and set the boulder in position, to be followed five years later by a manned expedition. The plan, a modification of a proposal by US President Barack Obama in 2010, is estimated it to cost about US$1.25bil (RM4.6bil), not including launch costs.

NASA also considered bagging a smaller asteroid and relocating the entire body into a high orbit around the moon. But after extensive studies, NASA opted to collect and move a bigger one, a mission that will cost about US$100mil more, but which better prepares the agency for the ultimate goal of landing astronauts on Mars.

“They’re the kind of things that we know we’re going to need when we go to another planetary body,” says NASA Associate Administrator Robert Lightfoot on a conference call on March 25.

NASA plans to study the asteroid for about a year and test deflection techniques to move it into place. So far, NASA has three candidate asteroids, but does not expect to make a decision about where to fly before 2019. Above, an early concept drawing of NASA's unmanned craft to capture an asteroid. The updated plan now involves the craft capturing a boulder off an asteroid (below) and putting it in orbit around the moon. – NASA 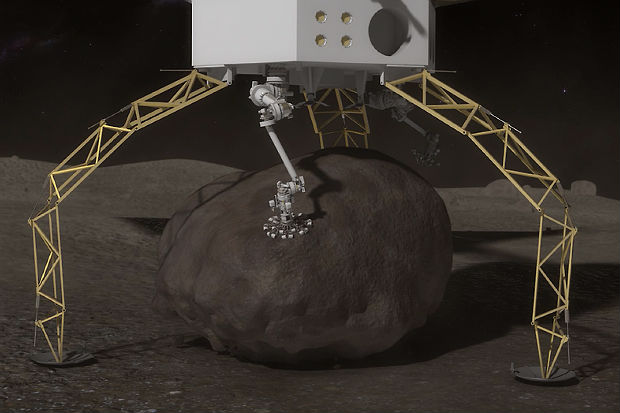 The mission involves flying a robotic spacecraft, powered by solar electric propulsion, to an asteroid for an extensive survey. Once a target boulder is selected, the probe will hover down toward the surface and deploy a pair of robot arms to grab hold of a 2m to 4m wide boulder.

“I’m going to have multiple targets. We can assess which one we want to go after and then I’ll have three to five tries to get it, or I can move on to a different one,” says Lightfoot.

The captured boulder, which will remain attached to the probe, will then be nudged into an orbit circling high around the moon, a process expected to take about six years. The probe would include a docking ring so that a NASA Orion spaceship mission targeted for 2025, carrying two astronauts, can reach the asteroid. Check out NASA's animated video of the manned mission below.

The techniques employed in moving the boulder by NASA may also one day be necessary to save Earth from a potentially catastrophic collision. An asteroid or comet smashed into the planet about 65 million years ago, leading to climate changes that killed off dinosaurs and most other life on Earth then. – Reuters