The concerns of an energy crisis is not unwarranted. The reserve margin in the peninsula has been falling to a level which the Energy, Green Technology and Water Minister Datuk Seri Dr Maximus Ongkili says is

DESPITE the delays in a couple of power plant projects and lower reserve margins, the situation is not as bleak as it sounds. The country has sufficient electricity and have mitigation plans in place to avert the situation.

“Such delays will undoubtedly pose additional challenges in operating the national grid system whilst maintaining system reliability integrity as the utmost concern .

“TNB is well placed to face these challenges head on to a certain extent and there are mitigation options which can be called upon.

“However, the delays referred to above will increase system generation cost significantly since coal fired generation capacity from project 3B and Malakoff will have to be replaced by far more expensive gas fired generation,” Roslina tells StarBizWeek.

The concerns of an energy crisis is not totally unwarranted. The reserve margin in the peninsula has been falling to a level which the Energy, Green Technology and Water Minister Datuk Seri Dr Maximus Ongkili says is “no longer comfortable” and the Government had decided to award the CCGT project in Johor, dubbed Project 4A, to TNB and Sipp Energy Sdn Bhd. 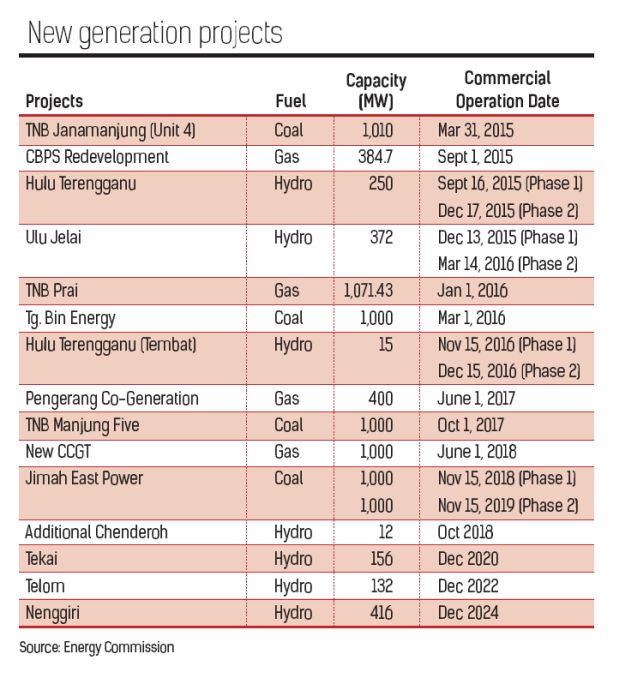 TNB’s Roslina says it would be “fair to assume that the reserve margin would be affected for the worse with the delays”.

Nonetheless, she says interim mitigation options do exist to alleviate the situation such as an extension of retiring plants.

The Energy Commission (EC) is not sitting idle to avert an energy crisis. The Government, which is well aware of the situation, is constantly monitoring it. It has decided to extend the operation of CCGT in SJ Jambatan Connaught Klang, to address the projected capacity shortfall and to ensure enough capacity available in central region and to mitigate possible delays of new generation projects.

“For 2014 onwards, a CCGT unit in SJ Jambatan Connaught Klang was extended for 4 years and 4 months. The extension was made due to its central location as the transmission networks to the central area becoming more highly loaded each year,” the EC said in Peninsular Malaysia Electricity Supply Industry Outlook 2014.

In a statement to StarBizWeek, the EC says that it conduct periodic assessments on all development projects approved by EC to ensure timely completion and normally do not comment of any specific project.

“However we have been monitoring the recent developments involving 1MDB with particular reference to the 3B project,” it says.

EC says as it asses the planning parameters, any decision on this project implementation would be based on the primary objectives of ensuring the adequacy and security of the power supply system over the specific periods.

The efficiency of the energy supply would also be an added consideration, it adds.

Between now and 2024, more than 8,000MW of electricity will added to the total generation capacity in the country.

is one of the three first-generation independent power producers (IPPs) that did not secure a renewal for their PPAs that would be expiring September this year and early 2016.

The other two IPPs are Powertek Bhd, which belongs to 1MDB, and Port Dickson Power Sdn Bhd, which is a joint venture between Sime Darby Bhd

The combined outgoing capacity are about 2,000MW.

The delays in the greenfield Project 3B awarded to 1MDB have raised concerns from all quarters including politicians and non non-governmental organisation.

While fast-tracking the construction of new power plants is one way of addressing the problem, industry players opine that a more immediate solution is to look at repowering expiring power plants such as YTL, Powertek and Port Dickson Power.

“It may not be a long contract. They could just tap the existing plant to fill up the gap should there be a shortfall in energy generation capacity in view of the delays,” an industry player says.

EC chairman Datuk Abdul Razak Abdul Majid recently said the commission was in constant contact with 1MDB on Project 3B.

“We should know by next week on the prospect of them (1MDB) continuing or not continuing (with Project 3B),” he had said.

Abdul Razak says the EC would “look into it” if it would call for fresh tenders should 1MDB withdraw from undertaking the project.

Last March, 1MDB won a controversial bid to build a 2,000MW power plant at a levelised tariff of 25.33sen/kWh for a concession period of 25 years.

Its partner was Mitsui Co Ltd.

In relation to the Project 3B, it was reported recently that 1MDB had called off an RM8.4bil Islamic bond issue that was to finance the project.

The withdrawal has been seen as a signal that things are not going as planned for the project.

Malakoff Corp Bhd’s 1,000MW coal-fired Tanjung Bin 4, which is scheduled to be completed next year, is six months to a year behind schedule.

Both 1MDB and Malakoff’s coal-fired power plants have a capacity of 3,000MW.

Meanwhile, the Association of Water and Energy Research (Awer) president S. Piarapakaran says according to its estimate, the delay in Tanjung Bin 1,000MW power plant construction will cause additional fuel cost about RM321.97mil for a six months delay and around RM643.94mil if the delay is a year.

“Meanwhile, a 6-month delay in Jimah East 2,000MW power plant construction will cause additional RM643.94mil in fuel cost if we benchmark it with the estimated additional fuel cost caused by Tanjung Bin delay,” he says.

Piarapakaran suggests the EC ensures that Tanjung Bin bears all the additional costs.