Mega bank in the making

PETALING JAYA: Just as the market was heading towards a period of listless trading due to the World Cup and prevailing cautious sentiments, trading in three financial institutions are being suspended today, paving the way for the formation of Malaysia’s biggest bank.

It is learnt that the three banks will write to Bank Negara to seek permission to commence a corporate exercise which will result in a mega bank that will have a market capitalisation of more than RM90bil, assuming the deal is concluded at about 1.70 to 1.75 times book value.

“The deal is likely to be done at 1.75 times book value based on CIMB’s current valuation of almost 1.70 times book. It is unlikely to be transacted at anything less,” said a source. 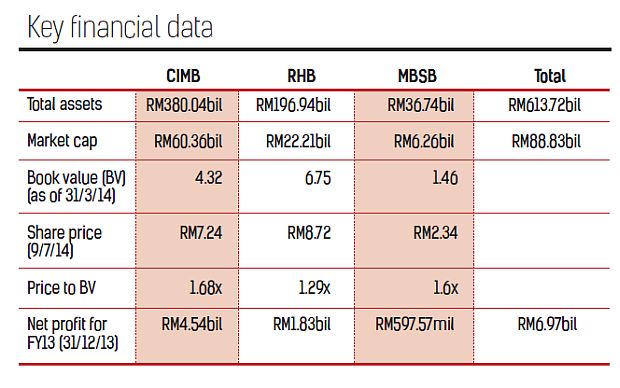 “Together with CIMB’s market capitalisation, the merged entity would fetch a market value of more than RM90bil,” said the source.

The Employees Provident Fund (EPF) will play a significant role in this merger because it has significant stakes in all three entities.

The eventual merger will see the EPF emerge as the largest shareholder in the mega bank, with a stake estimated to be more than 25%.

Sources said the impending merger was a well-kept secret, with only a few people having knowledge of it.

“Only a few people were clued in on the entire deal. News of a merger between RHB Cap and MBSB was already out in the market in the afternoon, but CIMB entering the fray caught most people by surprise,” said a source.

When the market closed and the announcements came out late, it became apparent that the creation of Malaysia’s largest bank was in the making.

Sources said the exercise would possibly involve a share swap between CIMB and RHB Cap at a book value of 1.75 times and an outright buyout of MBSB.

MBSB is a building society whose loans are mainly for residential loans and commands a lesser premium.

“But it is probably one of the most profitable financial institutions and has the fastest growing balance sheet. This is evident from the returns it has given to its shareholders in the last two years,” said an analyst.

A merger of the three financial institutions will result in a bank with the largest asset base, market capitalisation and earnings based on the latest published numbers.

Based on latest figures, the merged entity’s asset size is expected to be more than RM600bil and combined profits based on its last financial year will exceed RM7bil.

It will surpass that of Malayan Banking Bhd

(Maybank) that has a market capitalisation of RM91.1bil currently and asset size of RM578bil as of March 31 this year.

RHB Cap has been a takeover target as far back as three years ago, with both CIMB and Maybank as its suitors.

The block in RHB Cap that belonged to Aabar Group from Abu Dhabi was up for sale then.

However, talks fell through due to a pricing issue and the block changed hands between companies related to the Aabar Group.

Recently, Datuk Seri Nazir Razak charted a leadership transition plan for CIMB, whereby he will relinquish his role as group chief executive in September this year to become the chairman of the group replacing Tan Sri Md Nor Yusof, who is retiring.

Will it be a two-horse race?