Bank Negara says there are signs of prices moderating

PETALING JAYA: Malaysia is seeing signs of a possible moderation in overall house prices, data from the central bank show.

The growth in the Malaysian House Price Index (MHPI) declined to 9.6% in the fourth quarter of 2013, compared with 12.2% a year earlier, according to Bank Negara.

This was the first time since the third quarter of 2011 that the MHPI was below 10%, and the improvements were recorded across most states and most types of dwelling.

It said sales and new launches slowed in the last quarter of 2013, possibly due to the various measures imposed to cool down the housing sector since 2010.

“It’s possibly due to the wait-and-see attitude of some developers and buyers following the prohibition on developer interest-bearing schemes in November last year, further increases in real property gains tax in January this year, higher minimum purchase price for houses by foreigners, and uncertainties regarding the potential impact of the goods and services tax,” Bank Negara said.

The central bank pointed out that there was no conclusive evidence of a housing bubble in the country. It added that analysts, rating agencies and international organisations, such as the International Monetary Fund, had lauded the pre-emptive and concerted measures taken by the Government and Bank Negara since November 2010 to curb excessive speculative activities in the domestic property market and promote a sustainable housing market. (See table) 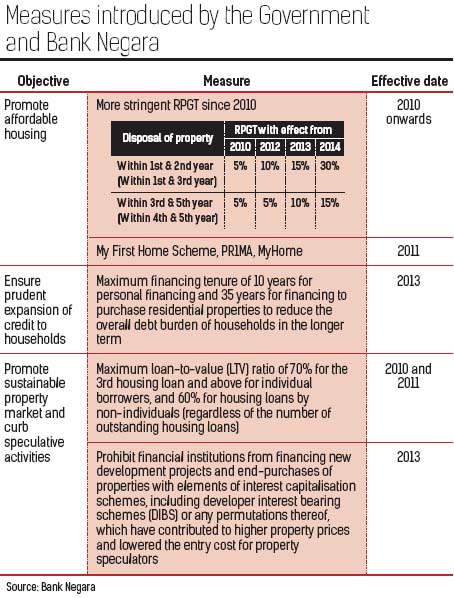 It also said that the bulk of home purchases continued to be for own occupation or medium to long-term investment.

“This was corroborated by data that showed 84% of home loan borrowers only had one outstanding housing loan account,” it said in an email response to StarBiz.

The central bank said borrowers were less inclined to dispose of their properties in response to a downward movement in property prices as their loan repayment capacities were not depend on the home equity value or expected capital gains. This was considering the medium to long-term nature of their ownership and investment horizon.

This scenario could limit the potential for a sharp increase in default incidences and credit losses to banks in the event of a price correction in the property market.

Based on a single factor sensitivity analysis on the housing loan portfolio of banks with a stressed probability of default (PD) of up to 10% (about four times the current PD) and adverse correction in house prices of 40%, banks’ excess capital buffers stood at more than five times the estimated expected losses.

Bank Negara said although the MHPI had expanded annually by between 10% and 12% since 2011, outpacing income and rental growth, the rate of growth in house prices remained significantly below those observed in some neighbouring economies.

It pointed out that while elements and pockets of speculative activities were present, the upward pressure on house prices was largely explained by structural factors.

“Demand continues to outpace new supply of houses by a large margin, particularly in the low to medium-priced segments and in major employment centres,” it said.

Demographic factors, given Malaysia’s relatively young population and labour force, increasing urbanisation, and general inclination to own a house, are expected to sustain strong demand for affordable residential properties in major urban centres, likely outstripping supply over the near and medium-term.

“Part of the mismatch in the market was due to rising land prices and construction costs that increased the incentive for developers to build high-end properties where the margins are higher,” the central bank said.

On the part of the Government, a number of schemes have been introduced to increase the supply of and access to financing for the purchase of affordable housing via PR1MA, MyHome and My First Home schemes.

In addition, the National Housing Council was set up in 2014 to develop strategies and action plans in a holistic manner, coordinate legal aspects and property price mechanism, and ensure provision of homes in a more efficient and expeditious manner.

Bank Negara said the earlier Government measures had also resulted in reduced credit-fuelled speculative purchases of residential properties where the annual growth in the number of borrowers with three or more outstanding housing loans has declined substantially to about 4%, from a peak of 15.8% prior to the implementation of the measures, to account for only 3% of housing loan borrowers.

It said the proportion of outstanding housing loans with loan-to-value (LTV) ratio above 70% tapered to 46.6% (2012: 50.1%), providing a comfortable buffer for banks against a decline in the value of the underlying collateral relative to the outstanding amount of a housing loan in the event of defaults.

Banks have also demonstrated an increased rigour in the assessment of factors which support property valuations, such as the level of development in a specific location, population density, status of overhang, existing and potential demand, and the number and value of turnover of properties within the surrounding areas.

It was also observed that the lower margin of financing was applied by banks on new housing loans for properties in locations where price increases have been stronger. In the more recent period, valuations used for this purpose have excluded values inflated by incentives offered by developers to house purchasers, which can increase house prices by between 10% and 30% above the intrinsic values.