Vitrox on acquisition trail, in talks to buy technology firm said it is open to possible merger and acquisition (M&A) deals to boost growth, as the company aims to increase revenue to RM500mil by the end of 2015.

Its president and chief executive officer Chu Jenn Weng said it had identified a privately owned technology company as target, but cautioned that talks were still at an early stage.

“It is not a small company... it is as big as Vitrox,” he told StarBiz, adding that the company had also been approached by other parties, although some were turned down because they were not seen as the right fit to the group.

Penang-based Vitrox is a designer and manufacturer of automated vision inspection equipment for the semiconductor and electronic packaging industries.

The global semiconductor industry was recovering from a doldrum and was projected to expand by 20% this year, the Semiconductor Industry Association said last week.

The positive outlook is spurring local companies like Vitrox and its peers to expand their business quickly to take advantage of the rapid growth in the industry.

“Our purpose of looking for a merger and acquisition (M&A) target is to find a technology company that fits our long-term goal and organisational culture, with sound business fundamentals,” Chu said.

“We believe this year is a growth year considering the US, Japanese and European markets are improving. We’re hoping for double-digit growth,” he said.

Chu said the company could increase its capacity by “1.5 to 2 times” by maximising space in its existing facility.

Vitrox produces machine vision system, automated board inspection, and electronics communication system which are used in the semiconductor, automotive, telecommunications and electronic packaging industries to detect defects that occur during the manufacturing process. 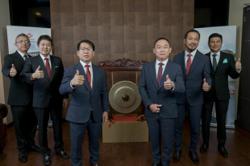