Gua Badak: Cave art from the past Pre-historic drawings in some caves spark the imagination.

IMAGINE a family of cave men sitting in their cave shelter at the end of the day. The hunters have been successful and managed to catch some prey for the evening meal. The gatherers have gathered enough vegetables to supplement the meat. Everyone is contented.

The sun has not yet set over the plains. One or two people decide to while away their time by drawing. Paper hasn’t been invented yet. Pens and ink are unheard of. So what do the budding artists do? Pick up small pieces of red stone and draw on the cave walls.

Back then, people led a simple life so the objects they drew were limited to what they could see in everyday life. This, of course, was predominately food. And so the people drew animals they hunted and could eat.

Today, thousands of years later, these drawings still exist. What might have been the cave man’s doodles have become important archaeological art. One man’s dugong is another man’s alien creature — the famous painting in Tambun, Perak.

The cliff face at Gua Tambun in Perak is a great example. The pre-historic drawings are located high up the face of a cliff that rises 50m above ground level. You have to climb a steep staircase to reach the cliff; be careful, as parts of these steps are covered by undergrowth.

At the top of the steps, you will come to the wide ledge in front of the cliff. The ancient paintings are mostly situated about 7m above this present-day floor level, and most depict animals. The main picture, featured in many articles and tourist brochures, is thought to depict a dugong.

It’s always interesting to view the paintings with other people as everyone has different ideas on what they represent. It can turn out to be quite a guessing game.

I imagine them to be a pig, a deer, and a round one looks like a turtle. Another seems to be a giant catfish – so were there large catfish in the rivers in those ancient days? There is even what appears to be a man with enlarged genitals!

Other motifs show abstract shapes, even a row of exclamation marks. It’s nice just to sit and gaze at the drawings and let your imagination come up with all sorts of ideas. Even archaeological researchers, who have recorded more than 500 individual drawings, are not really sure what some of the pictures represent.

Thought to be about 2,000 years old, the artwork was drawn probably with haematite. This red-coloured iron-based rock can be found around Gua Tambun, so the “artists” didn’t have too far to go for their materials. Does this look like a scene from a Beano or Dandy comic? Paintings of figures in Niah Painted Cave, Sarawak.

Presumably, back then, the floor level was much higher, enabling the artists to draw on the rock wall. At the same time, they would have had a wonderful view of the plains which are now Ipoh and its surroundings.

Fast-forward to the present day. Graffiti is generally frowned upon, especially when drawn on buildings and walls without permission. Some exceptions are when the art is particularly good and admired, such as the recent paintings on walls in Kuala Lumpur, Ipoh and Penang.

These city paintings are becoming a trend and, in the last few months, more and more have appeared. Some are now considered tourist attractions, and have even been sponsored by paint companies. So I wonder if, when the ancient cave people started to draw, did those around them scold them and tell them to stop. Or was it considered an art form even then?

Unlike drawing on paper or building walls, cave walls have limited space. After a while, there would be no more room for new drawings. It is rare to see ancient cave drawings that have been drawn over existing ones.

However, cave drawings can last over a millennia and are unlikely to be destroyed compared to those on buildings. Apart from Gua Tambun’s drawings, the Painted Cave at Niah National Park in Sarawak is another good example of cave art. The paintings there are thought to be 1,200 years old and show “death ships” that carried the dead to the after-life.

To get there, you have to go through the Great Cave of Niah, which is famous for its archaeology and collection of birds nests. The Painted Cave is just beyond the ‘back door’ of the Great Cave.

At first, it is hard to see anything in the dark but, as your eyes adjust to the conditions in the cave, you can make out the red drawings on the wall at the back of the chamber, drawn with haematite. The “boats” are quite curved and show what I imagine to be rows of oarsmen. Interspersed with the boats are other shapes that are hard to determine, as well as several human figures. I would guess these represent hunters and warriors.

Drawings of animals can also be seen on the wall. I thought I spotted a sun with rays, but when I looked closer, I decided it was a person’s head with hair sticking up; further below, it looked like a human torso.

On the floor below are the remains ofthose “death ships”. They are actually boat-shaped coffins containing the remains of the deceased and a selection of items considered useful in the after-life, such as Chinese ceramics, ornaments and glass beads. These relics have been removed and sent to museums. There’s a whole lot of things going on here. It would be fascinating to uncover the stories behind these cave drawings in Merapoh.

Apart from the pre-historic drawings, there are examples of modern “rock art”. These are thought to have been done by the Orang Asli, maybe 100 years ago. The best known of these are at Gua Badak in Lenggong, Perak. These charcoal drawings depict everyday happenings, such as a monkey climbing a coconut tree, people fishing, animals such as a horse and turtles, mats with patterns, and even cars.

Sadly, these drawings have really faded over the years; today, it is hard to see them clearly. Also the hill has been quarried, resulting in many fallen boulders in front of the rock face. Gua Badak is now part of the Lenggong World Heritage Site, but visitors are often disappointed with the sorry state of the place.

Over in Pahang, in the Merapoh area close to the Kelantan border, are more examples of pre-historic drawings. These have not been studied but are also thought to be modern and drawn in charcoal. These were only found in the past year, during our frequent trips to look for caves in the Merapoh area.

There are about six caves or rock shelters in Merapoh with drawings but, unlike those at Lenggong, the Merapoh ones are not easy to decipher. Some seem to show stick figures in strange positions; one looks like a skier, but I can’t believe it can be in tropical Malaysia! 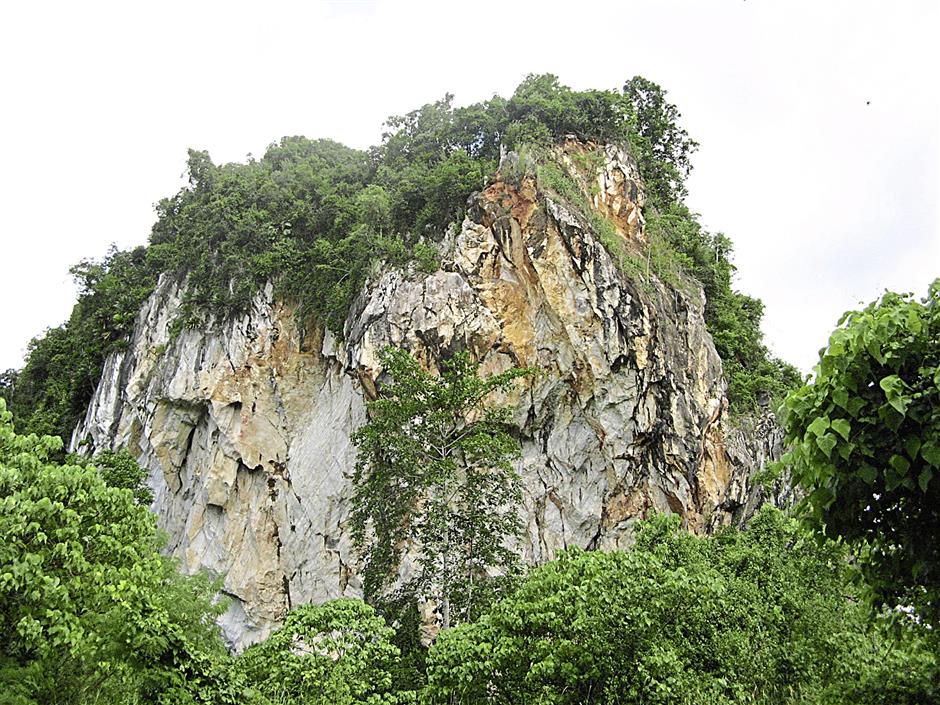 Much of Gua Badak has been quarried.

There are lots of squiggles, including what looks like a railway line that runs through Merapoh. Maybe it was drawn when the Orang Asli first saw the railway constructed. They all seem to be drawn in charcoal.

Across the border in Kelantan there is at least one cave near Gua Musang with drawings similar to those in Merapoh. It would be good to get them professionally dated.

So this begs the question, when does graffiti become archaeological artefact and have historical significance?

Getting to the caves