Vancouver Island in Canada is proving to be a treasure trove, especially for nature lovers and those seeking respite from the stressful urban environment.

THE shiny “Michael Jackson” — popular lately with fishermen — isn’t Ed Jordan’s first choice. Even the pink and yellow “Disco Party” ranks higher on his list of hoochies. But after hearing that another Campbell River fishing guide hooked a 14.5kg king salmon on it, he’s reconsidering.

“Take a look,” he tells me, idling the motor and rummaging through the tackle rack beside the wheel. Shaking his head, he unhooks a blue and green hoochie with silver sparkles and a tail like a hula dancer’s skirt.

“Nope,” he says, after a long look. He puts it back and pulls out a Tomic Plug 602. This lure, 13cm of ivory iridescence with a mean-looking hook, “swims” when you drop it overboard. 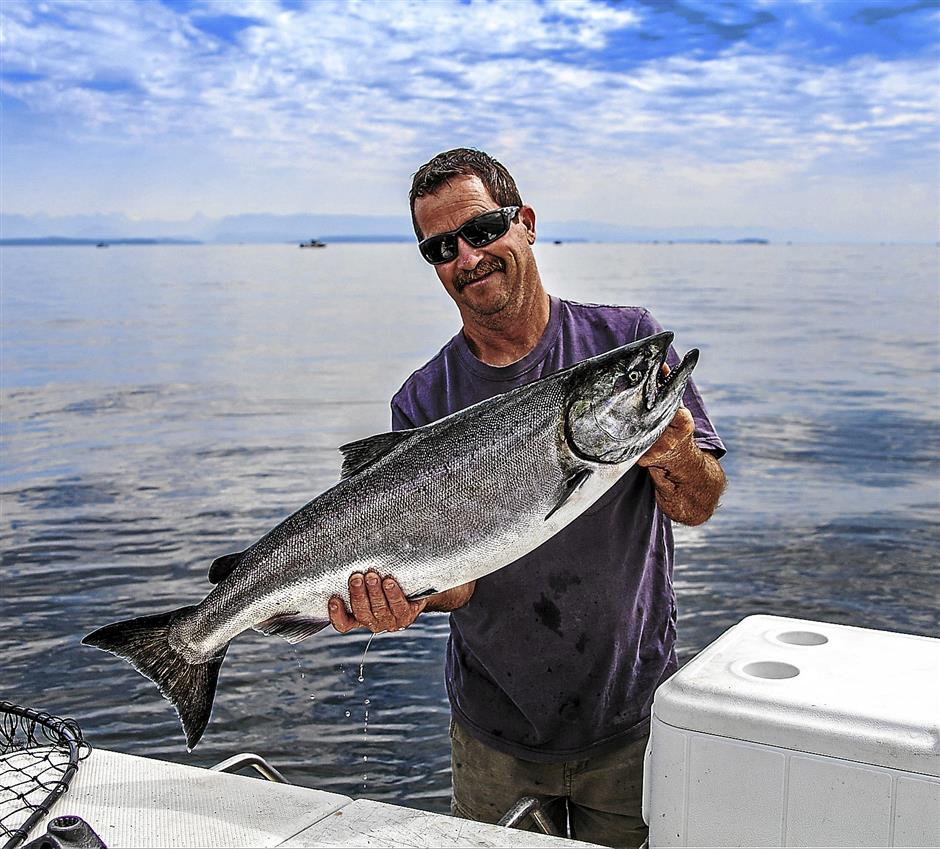 The Tomic Plug does it again: Fishing guide Ed Jordan with a king salmon, off Quadra Island, B.C.

Sure enough, the Tomic does the job. By mid-afternoon, we’ve hooked and landed two kings (Chinook) and a silver salmon (coho). To sweeten this sunny August day, we’ve followed Quadra’s ragged coastline, watched sea birds diving for dinner and spotted a pod of dolphins. Pleased, pumped and anticipating grilled salmon for dinner, we ask ourselves what took us so long to get here.

When you’re a gypsy by trade, ever searching for new horizons, seeing the world – all of it – seems possible. But as one season succeeds the next and you postpone this trip, or that trip, some plans wind up in the reject pile. Then one day you look at the pushpins stuck into that big world map, each one marking your travels, and right in the middle is a black hole, as empty as a 15th century sailing chart. Until last August, Vancouver Island, 481km long and 80.5km wide, lying off the south-west coast of British Columbia, was one of those places.

But not because it’s too far away. Early-morning flights from Los Angeles and Denver – and from most western US cities – arrive in Victoria, British Columbia’s capital city, around lunch time. Add an hour to rent a car and you’re on your way. Give yourself a week and you can tour most of the lower half of the island, especially Ucluelet (pronounced you-CLUE-let), on the south-west coast. This was a place we knew nothing about but whose name alone was tantalising enough to get our attention.

And so the adventure began. In Victoria, we tracked a pod of killer whales, explored the lively harbour scene and sampled the city’s impressive new world of food. We spent a day as Canadian postmen, flying with mailman and pilot Mike Farrell on CorilAir’s six-seater DeHavilland Beaver out of Campbell River. Farrell not only delivers letters, packages and emergency supplies to residents of six emerald-green islets, but he plays travel guide to sightseers along for the ride, pointing out tidal currents, celebrity mansions, hidden harbours and apple orchards. 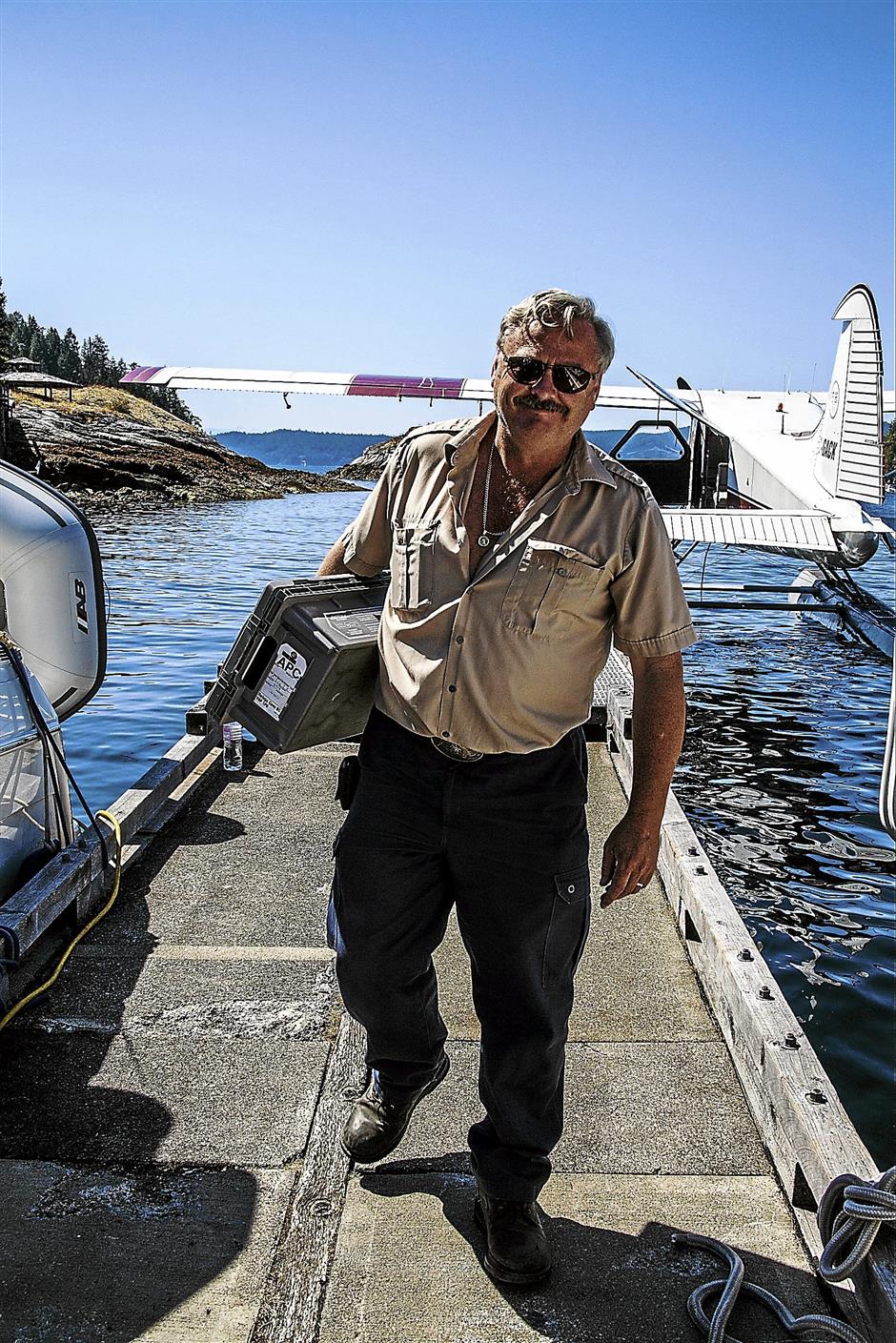 Following Route 19, between Victoria and Campbell River, proved as ample as potluck dinner at an Elks Club fundraiser. Harbours, inlets and towns dot the eastern shore, some more scenic than others, but each with its fishermen’s dock, sailboat slips, kayakers on the water and inviting green islets beyond.

Wandering through Nanaimo, we ate lunch at Troller’s Fish and Chips, a guidebook-recommended restaurant that took us 20 minutes to find, but that more than lived up to its reputation. Heading west towards Tofino and Ucluelet on Route 4, we stopped to explore Cathedral Grove, walking among the park’s 300- to 800-year-old Douglas firs, hoary ancients that have been spared the loggers’ saws.

For a week we hustled, going 16-7. But we shifted to neutral in Ucluelet, taking time to wander along the Wild Pacific Trail and to tour the town’s unique learning-focused aquarium. Even our lodging, at Black Rock Resort, was a poster child for the latest in minimalist design, instantly soothing. Ensconced among white walls, plate glass and monochrome upholstery, watching the tide surge and ebb was almost obligatory.

In fact, the longer I watched the breakers rolling in, the harder it was to look away. As each wave rose, crested, curled over into a wall of foam, roared onto the rocks and slid in among the tree roots beneath the window, the easier it was to breathe deep.

Our most memorable evening in Ucluelet was at the resort’s Fetch Restaurant, where we sat on the outdoor deck overlooking the ocean, ordered wine, fresh halibut and a steak, and lingering over dessert, watched the twilight fade into night. But the reverie was short. At 6.30am the next morning we checked into Jamie’s Whaling Station for a bear-watching excursion.

Why so early? When the tide is out, exposing the muddy inter-tidal zone, the black bears come out of the forest to feed. Digging in tide pools and among exposed rocks and logs, the bears are easy to see. So with the sun still barely above the horizon, our group of 12 was already cruising the bay, headed for the archipelago known as the Broken Islands. Soon the sun crested the trees, casting an eerie silver sheen over the bay, a photographer’s surprise.

“Keep an eye out for green swales along the shoreline, open places between the trees,” said our guide, Scott MacDonald, standing at the wheel. “Most are the sites of ancient Indian villages, but a few mark early homesteads. And those huge trees with the clumps at the top? Those are eagles’ nests in 700- to 800 year-old trees. The birds reuse and rebuild the nests every year, which get bigger every century. They can weigh up to a ton.”

Closer to shore it was MacDonald who spotted the first black bear. For five minutes we bobbed on the water, watching him digging and chewing. Finally he looked up, sniffed the air, caught our scent and galloped away through the trees.

“I’m glad to see he’s wary,” said MacDonald. “It’s too easy for poachers to move in and get off a shot.” Nearby, a harbour seal sunned on a rock, unafraid. Cruising into the shallows, we spotted blue herons wading. In some places, huge rafts of bull kelp floated, long green strands supported by swollen air pods.

Noticing a group of cottages in a grassy opening, MacDonald said it was a Toquaht village named Macoah, occupying a traditional First Nations coastal site. Spotting a second bear prowling between a heap of fallen logs, the photographers screwed on their long lenses and snapped away. This bear saw the boat but kept on digging.

“See those fallen logs in the water and washed up on the beach?” asked MacDonald. We’d seen them, giant logs, all about the same length, washed into back water inlets. “Most of those fell off commercial ships. I built my house out of those things,” he explained.

Back in Ucluelet, MacDonald apologised for finding just two bears, and those at a distance. That’s OK, said somebody. Seeing the coast, the dozens of tiny islets, the kelp, the seals, the eagles’ nests, was an unforgettable adventure.

“But you know,” said MacDonald, “the sad thing is that nature tours don’t sell. Nobody signs up just to see nature. We’ve got to show them bears and whales. But once they’re out there, they’ll see what keeps us coming back. And that’s what’s worth it.” – McClatchy-Tribune Information Service