I left feeling a little worried about these bathrooms. If one of them couldn't flush down a small wad of toilet paper, how would they fare with something arguably much worse? — Image by Freepik

When you imagine public bathrooms, the words "iconic," sculptural" and "classic" probably don't come to mind. Nor do the adjectives "clean," "safe" and "inviting," unfortunately. But that's exactly the type of mystical toilet that will wrap "fluid beauty around function" and transform San Francisco's city streets, according to local officials. I had to see for myself.

Twenty-five sleek, modernised public toilets — or "amenipods" — are slated to roll out as part of a new 20-year contract with the city, the two companies behind them announced. Funded by Paris-based "street furniture" company JCDecaux and designed by architecture firm SmithGroup, they've been lauded as futuristic and state-of-the-art by local news outlets. However, automated public bathrooms, also known as sanisettes, are already quite common in Paris.

The first of these public restrooms was installed Nov 23 at Embarcadero Plaza and has already had about 400 uh, "uses," according to Beth Rubenstein of San Francisco Public Works. It's staffed with a full-time attendant and open from 9am to 5pm daily — JCDecaux agreed to shell out $2.2 million a year to staff about 11 of them, per the department's press release.

Part of the agreement with JCDecaux also involves replacing some of the city's most discreet urban landmarks: Those cylindrical, forest green automatic bathrooms stationed throughout the Embarcadero, the Tenderloin, and other dense San Francisco neighbourhoods, the release added.

The new, Kubrick-esque toilets are designed to survive the city's biggest everyday challenges, like weather, vandalism and, of course, people themselves.

Almost as soon as I exited Embarcadero Station, I saw the stainless steel monolith gleaming in the distance. A couple of intrigued bystanders eyed it up and down, seemingly confused by the 13.5-foot-tall sculptural orb. As I stood in line behind someone Tuesday morning and waited for it to self-clean, mysterious vacuum sounds and clanging noises emanated from behind its curved closed doors.

When they slid open and I stepped inside, I half expected Opus No. 1 to start playing — you know, the famous new age hold music that plays while you're on the line with a doctor's office. Instead, a disembodied woman's voice echoed instructions through a hidden speaker system. Her robotic cadence, combined with the diffuse lighting and white-and-chrome interior, felt more Space Odyssey than San Francisco Public Works. My immediate thought was, "This is nicer than most bathrooms in people's houses, including my own."

But there was just one problem: Everything inside was soaking wet.

Ice-cold water completely drenched the toilet seat, the floor, the toilet paper dispenser, and somehow each and every surface. At first, I didn't mind — after all, it was clean. But then, frustratingly, I saw that even this "innovative," "state of the art" French toilet lacked one basic component that, in my opinion, every single public restroom should have but almost never does. "No paper seat covers. Why??!" I furiously jotted down in my notes app as I delicately placed layer upon layer of thin, liquor store-grade toilet paper on the sopping wet rim.

I tried finding a hook to hang my bag on because, you know, wet public bathroom floor, but couldn't find one. Instead, I precariously hung it on something that looked like a dimmer switch. Feeling somewhat defeated, I sat on the wet, disintegrated toilet paper and thought about my peers who went to business school.

When I flushed, my jerry-rigged toilet seat cover stuck to the side of the bowl. I tried to flush again, but it seemed like I only had one shot at this, and clearly I already botched it. After thrusting my hands under an air dryer and stepping outside, I waited for it to self-clean, hopeful that this would take care of my embarrassing mess. Once the door slid shut, the restroom locked and made whirring sounds for about 45 seconds. I approached an attendant and asked her how it cleaned itself, exactly. Does it just spray water everywhere? "Yep, it just sprays water everywhere," she repeated flatly.

I left feeling a little worried about these bathrooms. If one of them couldn't flush down a small wad of toilet paper, how would they fare with something arguably much worse? SFist reported that this restroom already broke after someone used it, though it's clearly been fixed since then.

"As expected with a new mechanical system, there will be small technical adjustments during this early usage period," Rubenstein said via email. "JCDecaux has technicians standing by and has assured Public Works that they will troubleshoot any mechanical problem as quickly as possible."

I left the plaza and went to Powell to see how one of the older, art deco generations compared.

I quickly discovered that these new "amenipods" are indeed a modern take on San Francisco's old-school public toilets — they have many of the same structural components, only they're cleaner, brighter and better maintained. Despite blasting the walls with water, in the end, the new generation of JCDecaux toilets does feel more hospitable. By comparison, the old public restroom by Powell was dim, grey and sort of dirty. The small skylight was vandalised and covered in graffiti. A sad wisp of toilet paper hung from the dispenser. I pressed a button for instructions, half anticipating the automated voice to tell me to just go (expletive) myself. 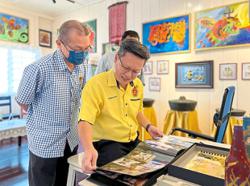 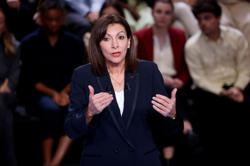