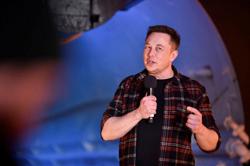 Musk, Tesla’s chief executive officer, has claimed without success that the SEC is harassing him and that the agreement violates his free-speech rights. — AFP

Elon Musk asked a federal appeals court to throw out the deal he made with the US Securities and Exchange Commission in 2018 requiring a Tesla Inc lawyer to screen all his company-related tweets, calling it an illegal effort to muzzle him.

Musk, Tesla’s chief executive officer, has claimed without success that the SEC is harassing him and that the agreement violates his free-speech rights.

US District Judge Lewis Liman in April refused to release him from the deal and end the requirement for a "Twitter Sitter.”

Liman said Musk was "simply bemoaning that he felt like he had to agree to it at the time” and now "wishes that he had not.”

"The pre-approval provision is a classic prior restraint that the Constitution forbids: a government-imposed muzzle on Mr Musk’s speech before it is made,”

Musk’s lawyers said in papers asking the 2nd US Circuit Court of Appeals in Manhattan to invalidate the agreement, or at least remove the screening requirement.

"The effect of the provision is to inhibit and chill Mr Musk’s lawful speech.”

The world’s richest man has been battling with the SEC over his social media statements since he tweeted in 2018 that he had "funding secured” to take Tesla private, sending shares of the electric-car maker surging.

The regulator sued claiming Musk and Tesla had misled shareholders. Musk and the company settled with the SEC, with each paying US$20mil and agreeing that Musk’s Tesla-related tweets would be reviewed before he posts them.

In his April decision, Liman ruled that Musk waived his 1st Amendment Constitutional Right to free speech, a finding Musk denied in his appeal brief.

"Mr Musk could not possibly have known the circumstances and consequences of the pre-approval provision because the provision applies to future speech about circumstances no one could anticipate in advance,” his lawyers wrote.

But even if he did waive his rights, such a waiver is invalid and unenforceable they said. Liman also denied Musk’s effort to block an SEC subpoena seeking information on his tweets, ruling that he’s as subject to investigation by the agency as anybody else.

Musk agreed to buy Twitter Inc for US$44bil (RM203.52bil) in late April, then said he was pulling out of the deal.

Twitter claims Musk got cold feet due to buyer’s remorse, not over concerns about the number of spam and robot accounts embedded in the platform’s more than 230 million users. The case is US Securities and Exchange Commission v. Musk, 22-1291, Second US Circuit Court of Appeals (Manhattan). – Bloomberg