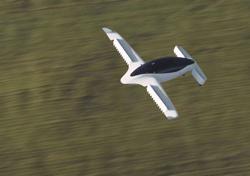 In many US cities, rush-hour traffic can be a nightmare. Electric aircraft developer Eve is currently conducting simulations in Chicago, hoping that its electric air taxis will one day help to slash commuter times. — dpa

CHICAGO: Electric air taxis could one day whisk commuters from downtown Chicago to O’Hare International Airport or to the suburbs, high above expressway traffic, in a fraction of the time it takes to drive.

That’s the vision of electric aircraft developer Eve, which is leading a group of aviation companies and local governments conducting simulations in Chicago this week. Though the aircraft are likely years away from receiving federal authorization to fly, it’s a vision shared by other major companies like Chicago-based United Airlines, which recently struck a conditional agreement to purchase at least 200 of Eve’s flying taxis in United’s latest investment in the industry.

For now, Chicago commuters can book a US$150 (RM680) trip on one of the simulation flights that are running for the next several weeks between Vertiport Chicago, in the Illinois Medical District, and heliports in Tinley Park and Schaumburg. The simulations use regular helicopters, but Eve, which is backed by Brazilian plane manufacturer Embraer, envisions bringing electric air taxis to markets like Chicago as early as 2026.

Eve co-CEO Andre Stein said the air taxis are nothing like electric helicopters or flying cars. They will use eight motors distributed around the aircraft to take off vertically, then electric pushers and wings to glide forward.

Stein envisions the air taxis helping commuters reach meetings across town, or providing a way to get home quickly in time for a child’s birthday. Rather than an everyday option like commuter rail or public transit, they can help save time in a pinch, he said.

The concept of bypassing traffic by air isn’t new. Helicopter taxi service already exists in cities like New York, where a flight can sometimes be comparable to or cheaper than the cost of a ride-share from an airport into Manhattan.

But Stein said the new technology is expected to make air taxis more affordable and seamless than helicopters, and estimated a viable ticket price could be around US$100 (RM453) to travel 20 miles. He also touted what he described as improved efficiency and sustainability.

"It’s much simpler, much lower maintenance than a helicopter, much quieter,” he said.

Eve would partner with operators to run the air taxis, and it would be up to the operators to decide in what cities they would be used. But Chicago is a big market, as are cities like Los Angeles and Miami, Stein said. Using Chicago-specific data and models, Eve estimates the city could eventually have around 240 electric aircraft flying 150 possible routes, once the network is fully built out.

But more work might be needed before Chicago gets there.

Blade, a company that offers helicopter taxi service to places like New York airports, previously announced a partnership that would have brought air taxi service to Chicago via helicopter. But the company later determined that to make regularly scheduled service work, the city needed heliports that were more convenient to where people live and work, CEO Rob Wiesenthal said.

The company, which has partnered with Eve on the Chicago simulation flights, currently uses Vertiport Chicago for chartered flights, deliveries of items like organs to nearby hospitals, and service to special events, like the 2021 Ryder Cup golf tournament in Wisconsin.

Still, Blade has been "pleasantly surprised” with bookings on the Chicago helicopter simulations, Wiesenthal said. He declined to provide numbers, but said the simulations include between seven and 10 flights a day, five days a week.

United Airlines, which has invested in flying taxis, said initial markets it is considering for use are the carrier’s hub markets, like Chicago. The company could use them to transport customers from cities to airports.

The airline said last week it invested US$15mil (RM68.03mil) in Eve and reached a conditional purchase agreement to buy 200 four-seat aircraft that have a range of 60 miles, with the option to buy 200 more.

The agreement with Eve follows a US$10mil (RM45.35mil) deposit the company put down on 100 electric air taxis from California company Archer Aviation.

Regional airlines SkyWest and Republic are also among the companies that have committed to purchasing Eve’s aircraft once they begin rolling off the production line, Stein said.

For now, Eve hopes the Chicago simulations will help provide a better understanding of how the air taxis could fit into current air traffic patterns and how they can connect with users’ journey via ground transportation to the heliport.

"It’s really about bringing another option for urban air mobility,” Stein said. "We don’t intend to solve all the traffic congestion problems, there’s no silver bullet there. But it’s about more options.” – Chicago Tribune/dpa

The future of flying taxis