Pelosi (left) and Taiwanese President President Tsai Ing-wen wave during a meeting in Taipei, Taiwan, on Aug 3, 2022. Pelosi’s visit to Taiwan briefly crashed Weibo, the Chinese equivalent of Twitter, as millions in the country discussed and debated her Asia trip. — Taiwan Presidential Office via AP

US House Speaker Nancy Pelosi’s visit to Taiwan briefly crashed Weibo, the Chinese equivalent of Twitter, as millions in the country discussed and debated her Asia trip.

The microblogging platform apologised for a half-hour outage of its mobile app in the period immediately before Pelosi’s landing at 10.40pm on Aug 2, when countless messages tracking her plane flooded social media.

Pelosi’s trip, marking the most senior US official visit to Taiwan in a quarter century, is seen as a provocation by Beijing, which considers Taiwan a part of its territory. Newt Gingrich, who was speaker in 1997 when he visited the island, said last month that she absolutely had to go so that China understands the US is not a “paper tiger”, a phrase popularised by Mao Zedong to describe opponents who looked more terrifying than they actually were.

The move has magnetised attention on social media globally as well as within China, with Twitter’s worldwide trending topics including Taiwan, Pelosi and US-China tensions.

ALSO READ: World’s most-tracked plane is US jet that may be carrying Nancy Pelosi

Responses on Weibo flipped the “paper tiger” accusation toward China itself, with some netizens in the country expressing disappointment that their government repeated rhetorical flourishes without adopting harder measures to stop Pelosi’s trip. Hu Xijin, the prominent former editor-in-chief of the Global Times, suggested in a now-deleted tweet that Chinese warplanes could “forcibly dispel Pelosi’s plane” and later posted to Weibo saying that the official response didn’t live up to expectations.

One humorous reaction, featuring an edited image suggesting a youthful romance between Hu and Pelosi, also circulated widely on the social network. On Weibo’s trending list, most of the popular topics Wednesday were about Pelosi’s whirlwind visit and China’s reaction, which included a series of targeted military actions and an article in the state-run People’s Daily about the determination of the Chinese government and people toward unification.

“Cancel the Taiwan-friendly policy and strictly prohibit cross-strait trade, making it an isolated island,” one of the most popular Weibo comments, with close to 100,000 likes, read.

After Pelosi’s landing, China halted natural sand exports to Taiwan and some fish and fruit imports from the island. Beijing also announced missile tests and military drills encircling the island that set the stage for some of its most provocative actions in decades.

On Wednesday morning, over a million people in China watched Global Times live streams of coastal cities in Hainan, Guangdong, Fujian, Shandong and Guangxi provinces for signs of military activity. In Taiwan, locals have shown little alarm, having grown accustomed to threats from China. – Bloomberg 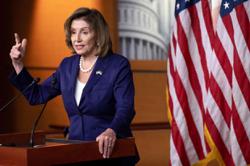