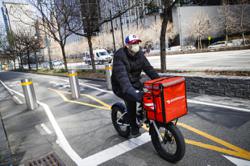 More than nine in ten Americans can get food delivered at a click, new research finds, helping those who struggle to reach bricks and mortar stores. — Instacart

WASHINGTON: It was the Covid-19 pandemic that finally drove Dustin Karzen, hunkered down at home in Escondido, California, to a first: going online to buy groceries.

Karzen, who was in seminary school and getting food stamps to help provide for his family, took advantage of a federal pilot programme allowing him to use the benefits to order food from local grocery stores to be dropped off by Instacart.

He is among a wave of people turning to delivery services, which anti-poverty experts say can help vulnerable groups who might otherwise struggle to access fresh, healthy food.

“Using delivery services was a safety measure – not having to go into a grocery store or be in proximity with a lot of people,” said Karzen, 33, who along with his wife and three children recently moved to near Boise, Idaho.

“It was born out of necessity, but after doing it for a while it became our go-to,” he said of grocery delivery, citing time savings and convenience.

Online purchasing surged during the pandemic, rising in the United States by 43% to about US$815bil (RM3.60 trillion) in the first year, according to the US Census Bureau.

The number of US households that bought groceries online roughly quadrupled to more than 64 million between August 2019 and October 2021, according to L.E.K. Consulting.

The federal government took note, after the US Department of Agriculture (USDA) launched a pilot programme in 2019 allowing low-income households to use Supplemental Nutrition Assistance Program (SNAP) food coupons for online grocery purchases.

That was quickly expanded to cover nearly every US state as the pandemic “highlighted the need to increase safe access to foods for SNAP participants”, an agency spokesperson said.

Food delivery zones now reach 93% of the US population, according to research published in May by the Brookings Institution think-tank that looked at how the services improved access for so-called food deserts.

Their expansion could be a “game-changer” for people who lack easy access to shops, and those facing mobility challenges or time constraints, the report said.

“For someone working odd hours or long hours (who) has a family to feed, it can be really tough to get to the grocery store, whether it’s accessible or not,” said Caroline George, a senior research assistant who co-authored the report.

“So this can be transformational.”

About 13% of US census districts are considered both low-income and lacking access to food shops, according to the USDA.

While anti-hunger groups attribute food insecurity to multiple factors, unequal distribution of grocery stores has been increasingly recognised as a contributor.

In Washington, as in other cities, such patterns arose from a history of disinvestment coupled with structural racism, said Beverley Wheeler, director of D.C. Hunger Solutions, an advocacy group in the nation's capital.

Neighbourhoods in the capital used to have many small corner groceries, she said, but the growth of chain supermarkets pushed out most.

“The wards with the most income, the most education, a whiter population, all had more grocery stores. And the poorer neighbourhoods ... lacked grocery stores,” Wheeler said.

In November, the group found the city’s two poorest wards had just three grocery stores, compared to 16 in the richest.

Wheeler said delivery services could be particularly helpful for people with disabilities or chronic illness.

But she also cautioned that many elderly residents lacked Internet connections and digital know-how, while federal assistance can be used for groceries but not delivery fees.

That cost can be a barrier: US delivery fees stand at about US$5 (RM22) on average, according to Bain, a consultancy.

“Food delivery adds value for many consumers, but higher prices will only put delivery further out of reach for many food-insecure households,” said the Brookings report.

Others worry about the broader impacts of delivery on urban areas.

Prioritising delivery services can end up “damaging the cityscape”, said Greg Lindsay, a senior fellow at NewCities, a global nonprofit.

In an effort to be as close as possible to customers, some delivery groups have taken over storefronts as “microwarehouses” and logistics hubs that can detract from street life and thus potentially hurt other shops, he said.

“It was already hard enough to make it as a small business, and this makes it harder to survive,” he said.

The platform allows people to place grocery orders and then pick them up at a local food bank or other agency, and in some cases get them delivered, she said.

The 63-year-old, who spoke on the condition that only his first name be used, said that he and his wife use the system twice a month, choosing up to 45 items from an online list and picking them up at a local center in a pre-arranged timeslot.

“That’s almost totally erased when you can just drive up ... and drive off,” he said. – Thomson Reuters Foundation

Survey: 60% of food delivery riders in S’pore signed up during Covid-19 pandemic

Uber sees grocery delivery sparking its next wave of growth