Khaby Lame is now the most-followed person on TikTok 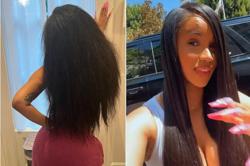 Lame, 22, is famed for doing videos where he pokes fun at life hacks deemed unnecessary or overly long by showing a simpler way of doing certain things. — Screengrab from TikTok @khaby.lame

Khaby Lame has become the creator with the biggest following on TikTok with over 143 million followers, taking over the spot from dancer Charli D’Amelio, who has over 142 million followers.

Lame, 22, is famed for doing videos where he pokes fun at life hacks deemed unnecessary or overly long by showing a simpler way of doing certain things. His videos have received more than 2.3 billion likes from users on the platform.

The New York Times reported that Lame is based in Italy. In 2020, Lame lost his job as a factory worker and start posting videos while living with his parents.

He said in the report that his face and expressions are what make people laugh, adding that his muted reactions are universally understood.

A Vogue article described Lame as the “fresh prince of TikTok”. In the Vogue interview, he also said that the funniest part about his content is the silence.

“Silent comedy speaks a language that everybody in the world can understand,” he said.

D’Amelio has responded well to news that Lame has dethroned her as the most-followed creator on TikTok.

“I had No. 1 for two years. It’s time for someone else to have that spot, and I’m proud of him. He’s a friend, and there’s no bad blood,” she said in a report by TechCrunch.