Opinion: On WhatsApp, when were you 'last seen' at?

What about the service being charged every time someone opens the app? — School photo created by freepik - www.freepik.com

A friend asked me the other day: "Is it a good idea for WhatsApp to become a paid-for platform?"

"Not just good, but brilliant," I said. "I have my own reasons for thinking so — what's yours?"

She went into an animated spiel that she's had enough of people messaging relentlessly. And unnecessarily. "Like my heart rate goes up whenever someone pings 'Hi', and then doesn't say anything more. I mean, what's that supposed to mean? Why keep me hanging? If, on the other hand, this was a paid-for service, the other party wouldn't be wasting monetary resources and getting straight to the point so that everything — the greeting plus the query — is collated into one composite thread."

That was a great point, I thought.

But I had an even more Nietzschean thought I wanted to flesh out. What about the service being charged every time someone opens the app?

I proceeded to tell her why I was going down that path.

The other evening, on a sacrosanct weekend, I started getting a series of missed calls from a number not saved on my list. I was on another call, so I ignored the trying-to-bamboozle-their-way-in ones, and then forgot about them by the time I got off the hook.

The next day, I woke up at 5.30am to turn off the air-conditioning, and on conditioned reflex checked in on WhatsApp (now, if WhatsApp had been a paid service and was charging me each time I paid a visit, I wouldn't be traipsing in and out with such alacrity). I went back to sleep soon after.

Then, I woke up around 8am, and noticed I had a series of missed calls from the previous evening's 'unknown' caller. At 6am. I'd not heard my phone ring since it was (luckily!) on silent.

Who calls at 6am — unless there's some terrible emergency?

Oh My God (or maybe I should have said "Heavens to Betsy", a new turn of phrase I discovered on Phrazle which means the exact same thing as OMG), has there been a terrible emergency?

I called the number back immediately, and turned out this was a random person trying to get in touch with me for a story idea she had. "I got your number from _, and he suggested I get in touch with you," she giggled. "Oh, I was trying to call you last evening as well."

My friend, who only wants WhatsApp messages to be charged each time, had a simple solution. "Go to Settings and switch off the 'Last seen at' option."

"I can't do that because then I'm automatically blocked from seeing others' 'Last seen at'," I sulked. "At times, I like to see when others were last seen at." – Khaleej Times, Dubai, United Arab Emirates/Tribune News Service

This upcoming WhatsApp feature will completely change the way you chat 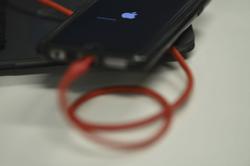