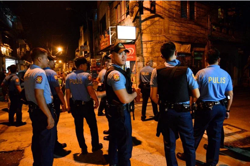 The man pleaded guilty in a Singapore district court on Friday (Feb 25) to two charges each of making an obscene film and being a public nuisance. — Background photo created by rawpixel.com - www.freepik.com

SINGAPORE: While working as a teacher in a secondary school, a 49-year-old man used his phone to capture over 128 obscene videos of men in toilets, including his colleagues and students.

The man, who cannot be named due to a gag order that protects the identities of the victims, pleaded guilty in a district court on Friday (Feb 25) to two charges each of making an obscene film and being a public nuisance.

He was caught red handed while filming a police investigation officer drying himself in a clubhouse toilet in a condominium.

The court heard that at least two of the victims were students at his school and at least three were staff who taught there. They were all filmed in the male toilets.

Over 50 videos captured the faces and genitals of the victims.

The man used a phone to record the videos, often pretending to look for an item or acting like he was speaking to someone to throw off suspicion.

He had moved close to the victim, now 20, and positioned his phone in a way where he could capture the teen’s face and genitals.

On Nov 29 that year, he filmed another student changing out of a pair of shorts in the male toilet. The video was 28 seconds long and captured the student’s face.

He struck again on April 15, 2018 at the same school when he filmed a teacher urinating.

The law caught up with him that same day when the accused filmed the police officer drying himself after a shower.

He was standing on a bench to record the victim from outside the shower cubicle when the male officer spotted him.

The accused claimed he was checking if he had left his condominium access card on the ledge of the showers. He then left the toilet quickly.

But the officer suspected the accused had filmed him while he was naked. He left the toilet and searched for the accused.

When confronted, the accused denied the act but eventually handed his phone to the officer.

“At the guard house, the (officer) briefed security officers about what had happened and asked the accused to unlock his iPhone in their presence.

“The accused did so and the first thing that appeared on his phone screen was the video recording of the officer,” said Deputy Public Prosecutor Niranjan Ranjakunalan.

The officer discovered that the phone had numerous recordings of naked men.

The police later seized the accused’s phone and laptop.

Seeking a sentence of at least 11 weeks’ jail and a fine of S$2,000 (RM6,173), DPP Niranjan said the accused had breached the trust placed in him by the students of the school he was teaching at.

In videos where the victim’s face was shown also “heightened the dangers associated with the risk of circulation”, said the DPP.

The Straits Times has contacted the Ministry of Education for comment.

The offence of being a public nuisance carries a maximum penalty of a S$1,000 (RM3,086) fine. – The Straits Times (Singapore)/Asia News Network