In the face of an ongoing pandemic, millennia-old Chinese New Year traditions have been slowly evolving over the last two years, with technology readily providing safer alternatives. — Party photo created by freepik - www.freepik.com

As the year of the Tiger comes roaring in this Chinese New Year, more and more people are embracing technological solutions and apps to get ready for the festivities and stay in touch during the pandemic.

One of the most recognisable parts of Chinese New Year is the red envelopes or ang pow, a gift of money tucked into a red envelope meant to wish the recipient good luck. Traditionally, it falls on married couples to provide these gifts to unmarried visitors.

As people increasingly adopt digital payment over physical cash, this age-old tradition has gone digital and is being gifted via ewallets and bank transfers.

For recently married couple Teoh El Sen and Yvonne Lim, virtual ang pow are a “not so welcome” reality of the pandemic, as reducing physical contact is recommended.

Right: Teoh (orange shirt) and Lim are planning to send virtual red packets to friends they are unable to meet in person. — TEOH EL SEN

“Part of the fun is the giving or receiving of that red packet. Just getting a phone alert or SMS that you’ve been sent a cash transfer just doesn’t feel right,” admitted Lim.

Most Malaysian ewallet brands such as Touch ‘n Go, Boost and Grab, and even banks like Maybank which has its own ewallet service, are offering special virtual ang pow features.

These add a visual layer to the experience. For example, there may be an animation of a red envelope being opened or fireworks popping up.

Also, users may be incentivised with additional promotions such as gifts, ewallet credit or even cashback promotions.

A spokesperson for Touch ‘n Go ewallet revealed that most virtual ang pow were sent on CNY eve and on the day itself, matching how people tend to gift these to visitors when having an open house or during reunion dinner the night before.

According to Touch ‘n Go, 25% more virtual red packets were sent in 2021 compared to the year before, which means more and more people are buying into the idea. This year, Touch ‘n Go is offering cashback for every virtual red packet sent with a minimum value of RM5, while Boost is offering its ang pow packets in more designs and the option to donate to deserving charities.

Lim, however, noted that while gifting via ewallets is indeed a convenient option, the catch is making sure the recipient also uses the same platform. Otherwise, the money sent remains stuck inside the ewallet.

Her husband, Teoh, who works in Beijing, said this is less of an issue in China as WeChat is the dominant platform for giving red envelopes. One of the most recognisable parts of Chinese New Year is the red envelopes or ang pow, a gift of money tucked into a red envelope meant to wish the recipient good luck. — Family photo created by pressfoto - www.freepik.com

He added that the convenience of gifting through the app has made it so simple that friends and bosses now casually gift virtual ang pow to friends and employees, even outside of celebration periods.

Being far from home during CNY is the part that Teoh least enjoys, and video calling his family over reunion dinner doesn’t provide much comfort.

“Being alone in the apartment with my family on a phone screen somehow makes me feel even lonelier!” he said, adding that he is glad to be back in Malaysia for the festive period this year.

Even for those in Malaysia, however, this year’s reunions may be a muted affair due to concerns over the highly infectious Omicron Covid-19 variant and the standard operating procedures (SOP) implemented by the government. 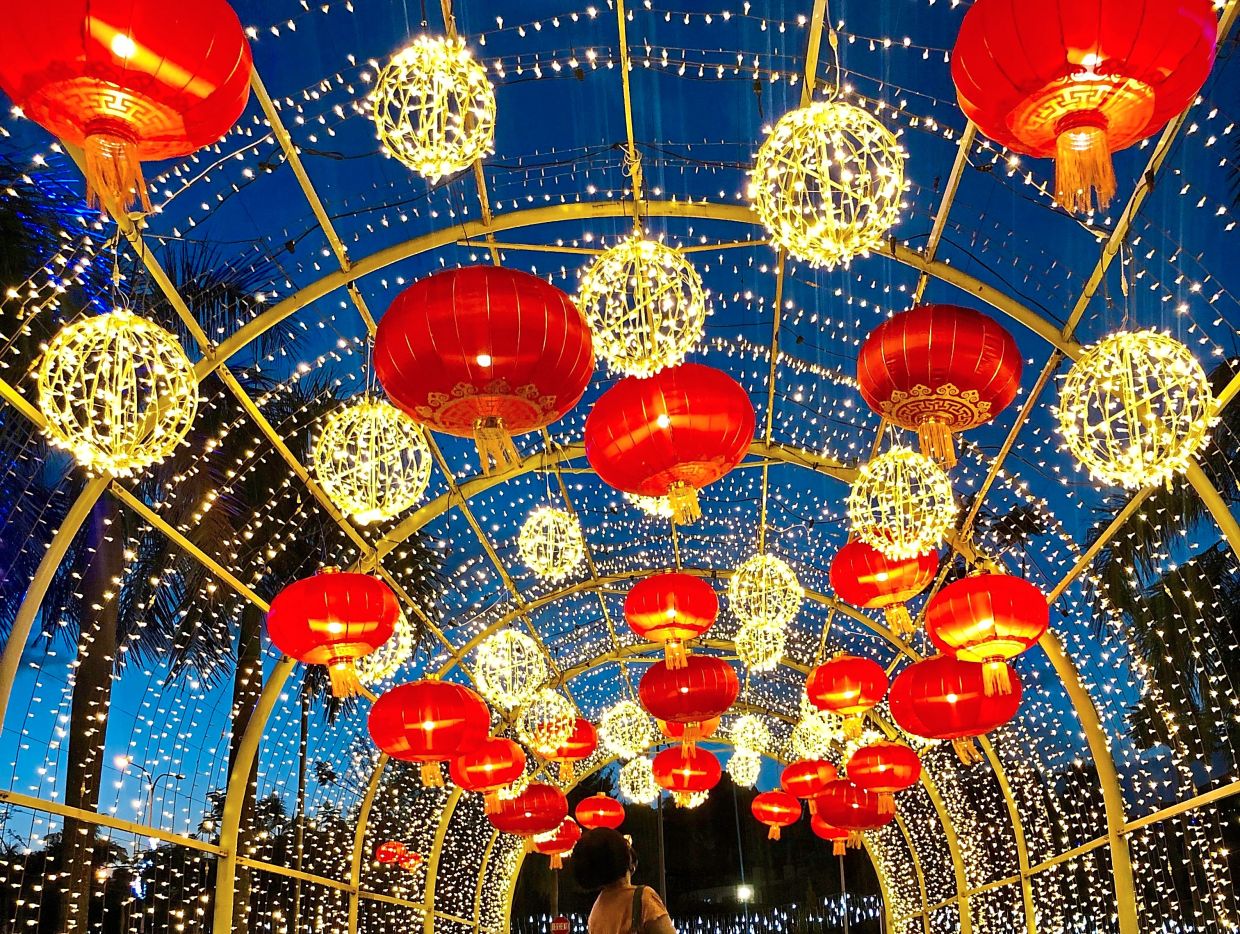 CNY is in the air, or at least in the malls, as locations like IOI City Mall in Putrajaya have set up decorations for the Year of the Tiger. — LOW LAY PHON/The Star

Datuk Halimah Mohamed Sadique, the National Unity Minister, announced on Jan 19 that family reunion dinners would be permitted but limited to close and immediate family members.

She said other basic SOPs must be followed, including ensuring guests check-in via the MySejahtera app and are fully vaccinated, as well as providing temperature checks.

Last year, house guests during the reunion dinner were limited to 15 people.

Due to the movement control order (MCO) in place at the time, even lion dance troupes had to cancel their performances.

One creative troupe, the Shaolin GC Showtime Academy, made headlines for instead offering lion dance videos which could be purchased and watched online. 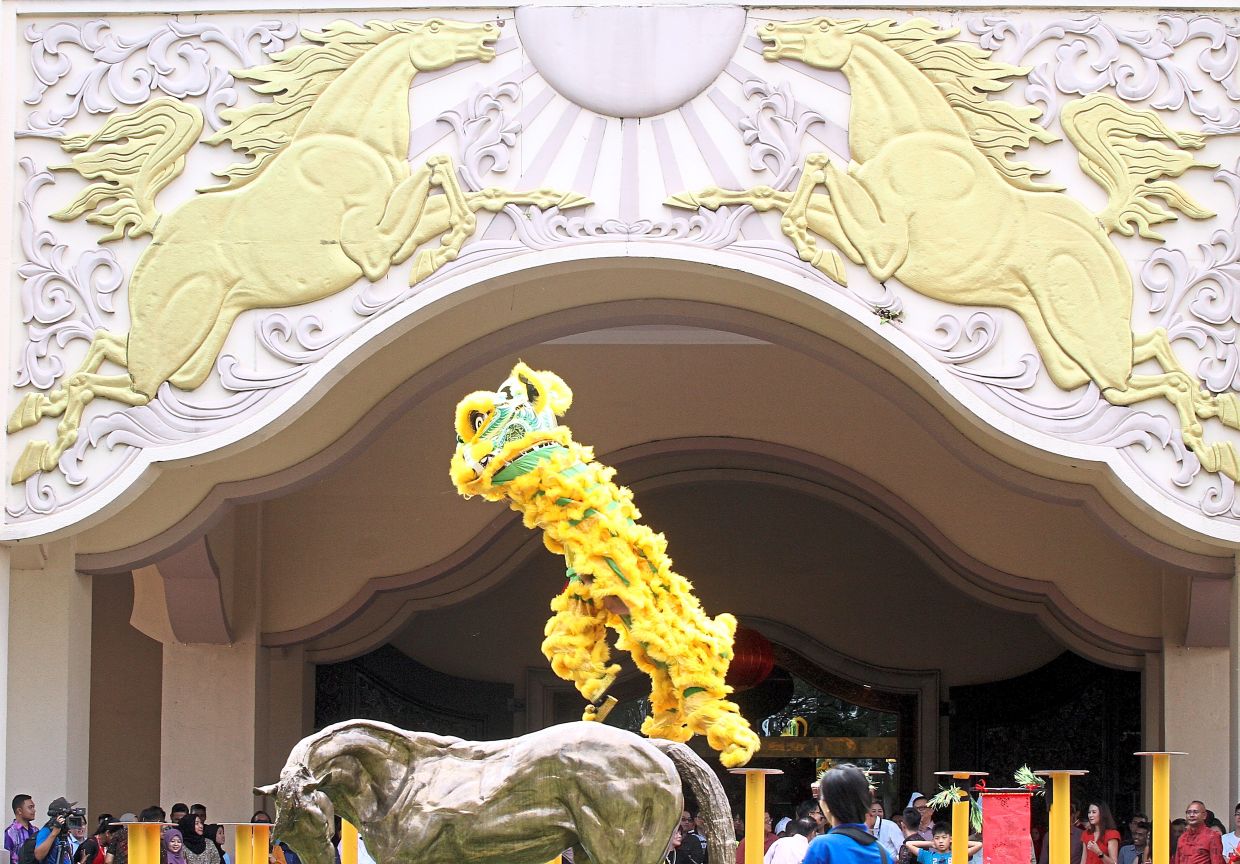 The Shaolin GC Showtime Academy performed live in 2020 before MCO caused the troupe to do their shows online in 2021. — AZLINA BT ABDULLAH/The Star

When contacted, the Academy’s head coach Alex Loh said the troupe would not continue online this year, thanks to more relaxed conditions.

“We are going to do our dances in malls, hotels and the usual events this year. Well, hopefully, if things stay stable,” he said.

Meanwhile, in Sarawak, the Unit for Other Religions (Unifor) decided that the number of family members should be limited to 50% of a house’s capacity, with physical distancing of 1m observed. Divers wearing a traditional lion costume (left) and a God of Fortune costume (centre) look on as a sea turtle swims past at the Aquaria KLCC oceanarium during their underwater lion dance performance in Kuala Lumpur on Jan 21, 2022. Malaysians can look forward to in-person lion dances again this Lunar New Year, which marks the Year of the Tiger, under the new CNY SOP. — AFP

They also require visiting family members to have their temperature screened and record their attendance via the MySejahtera app.

Those travelling are also encouraged to do a Covid-19 self-test before visiting their families.

The Penang Information Department has also called for strict adherence to SOP and announced the cancellation of the annual Chief Minister’s Chinese New Year open house, for the second year in a row.

Federation of Chinese Associations Malaysia (Huazong) president Tan Sri Goh Tian Chuan said that with improving conditions thanks to widespread vaccination and a lower number of cases compared to last year – the community could consider celebrating in person, which he added was more appropriate in line with tradition. 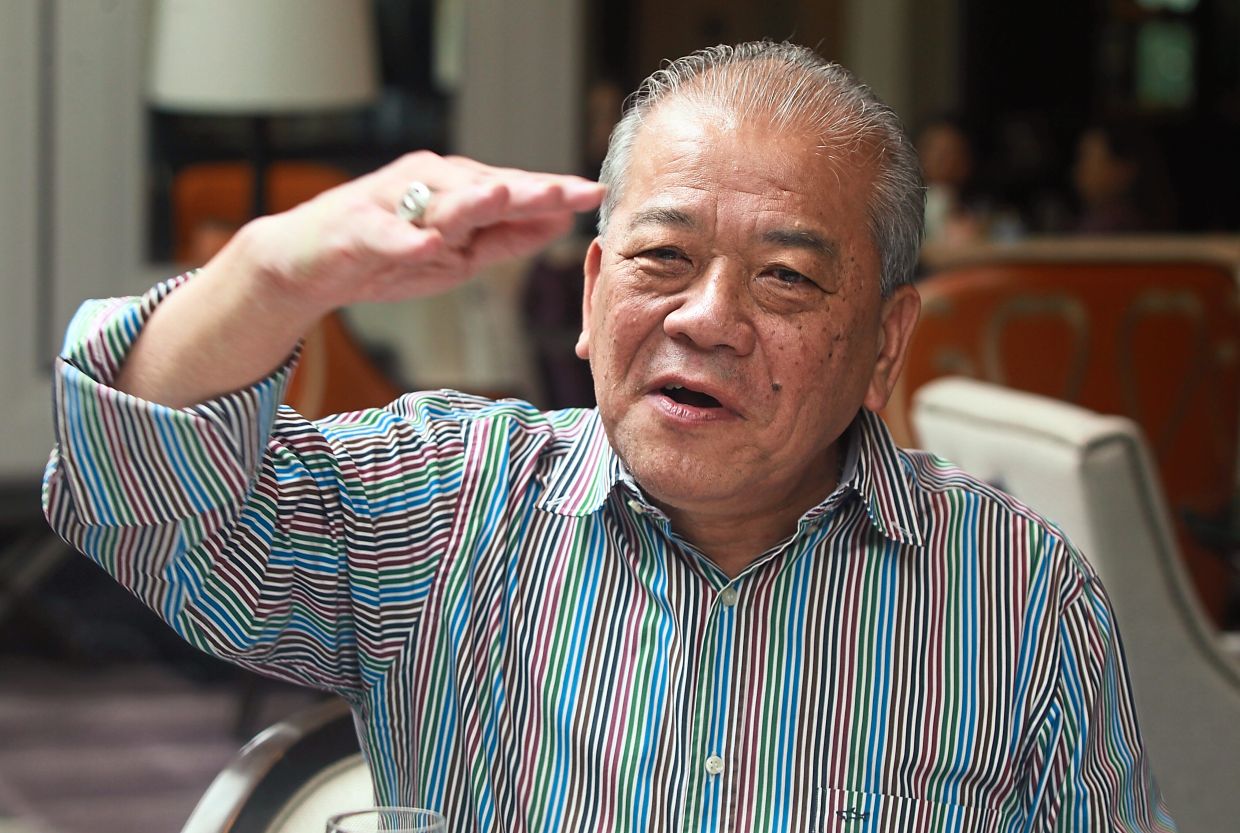 Goh says it has been hard for senior citizens to catch up with the sudden popularity of virtual ang pow over the past two years. — NORAFIFI EHSAN/The Star

Goh added, however, that services such as virtual ang pow and lion dances were an acceptable approach when conditions were poor as they enabled people to still celebrate CNY and that technology made it possible to continue observing traditions in a safe manner.

“I believe everyone would want to have the freedom to celebrate. But for those working or studying overseas, they still need to get in touch with their families and celebrate the traditions online, including receiving virtual ang pow from their parents or elders,” he said.

On the flip side, he added that it has been hard for the less tech savvy, especially senior citizens, to catch up with the sudden popularity of these services over the past two years.

“As this is a reality we must accept, we should encourage and patiently teach our elderly how to use these apps so that they, too, can benefit from it,” he advised.

Graphic designer Ang Tee Chian noted that getting family members from different generations on the same page when it comes to tech can be a struggle.

He said he is happy this year’s extended family reunion will be in person rather than over a laptop screen, though in-person visitors pose another challenge: managing crowds and ensuring everyone does a self-test.

“First, we tried doing this on the family WhatsApp, but it was a headache to keep track of who was saying what, who was actually coming versus people just bombing the chats with CNY stickers and well wishes!” he said.

He said digital invitation platforms – which easily generated beautiful invitation cards and tracked RSVPs – were a huge convenience, especially as some services also send reminders, in which he is planning to add instructions to get self-tested.

Ang added that Google Calendar has similar functions for organising events and generating invite links, though he still appreciates the traditional way of sending a card which feels more “authentic or old fashioned, in a good way”. 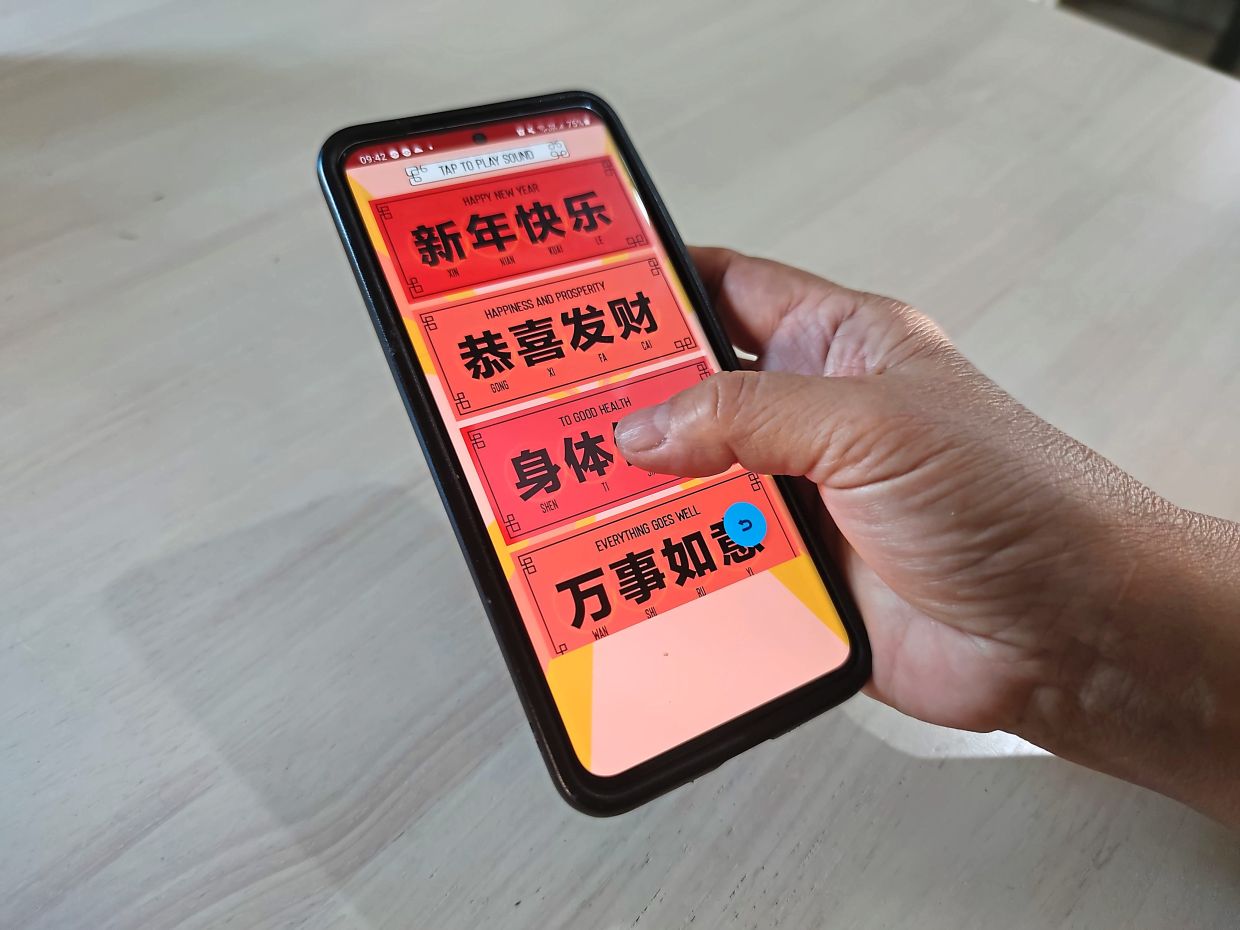 Another piece of tech he is trying out this year is digital Lo Hei apps.

Lo Hei is the tradition of tossing Yee Sang, a raw fish salad, as high as possible using long chopsticks while shouting out auspicious phrases.

He admitted that for him, it was more of a joke than a health concern, even if some Lo Hei apps market themselves as a safer alternative to shouting in person and having the risk of saliva getting into the salad.

“I saw some videos and it looked hilarious pressing buttons for stock phrases. 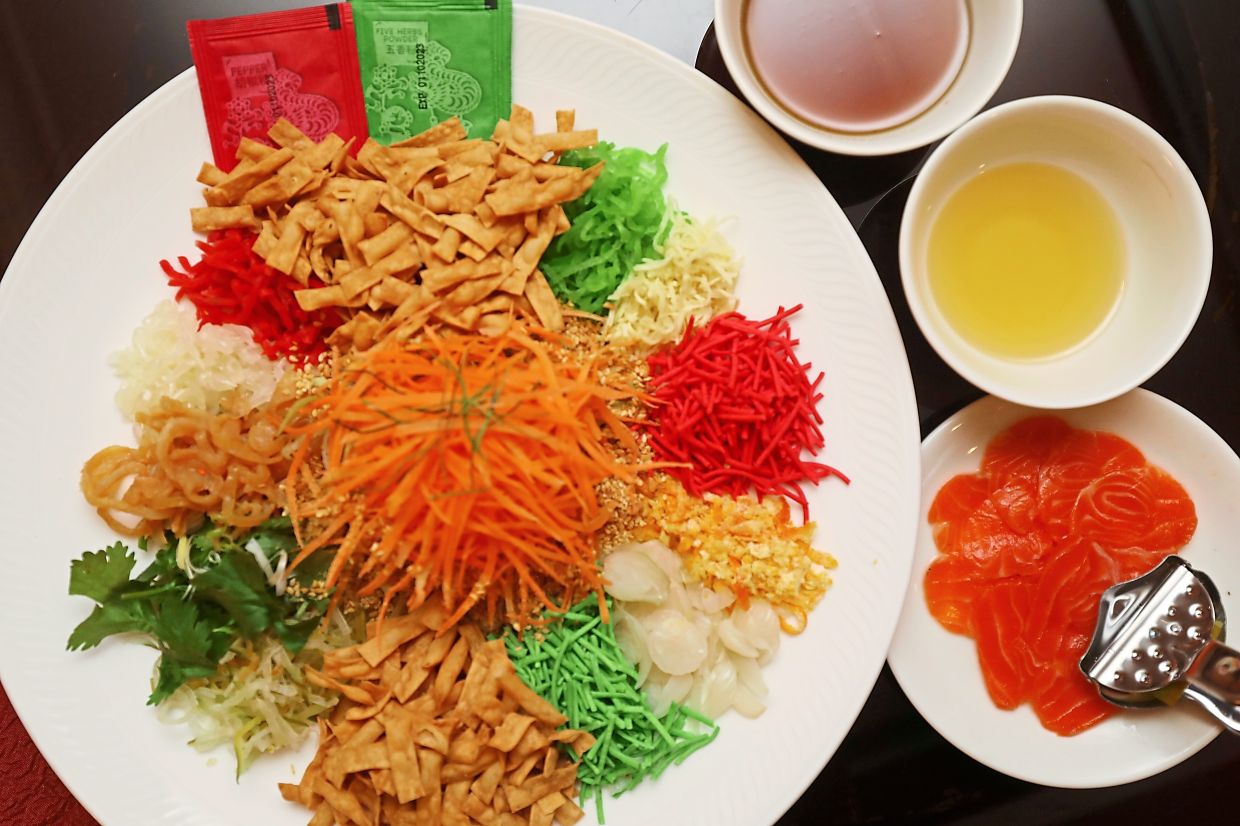 “Who knows, it may be nice to participate by using the proper Chinese phrases rather than how we usually just shout out in English,” said Ang, who admitted to having a poor grasp of Cantonese.

As with any celebration that has family members visiting, a lot of spring cleaning and some new furniture is usually in order.

Before buying a sofa that doesn’t fit thematically – or worse doesn’t fit physically – it’s generally a good idea to see how it will work in an existing space. With the help of interior design platforms, consumers can now plan room layouts without moving furniture or even using augmented reality (AR) to visualise the changes.

These services can range from simplified 2D floor plans to generating 3D rooms, where users just need to key in the dimensions of the furniture they are considering and the space they want to place it in.

Some services like Planner 5D and Home By Me also offer Pinterest-like inspiration boards, generated from user submitted designs.

For those with an already crowded house, second-hand market places like Carousell and Mudah.my provide a convenient way to clear out unwanted furniture that is otherwise still in good condition, potentially helping pay for the new incoming items.

Realising some people are in a rush to get the items out of their homes but may not be familiar with selling second-hand goods, startup Unearth Store takes the role of middleman: removing furniture, then doing the pricing research and photography to get it sold.

In return, the startup takes 50% of the sales as well as a RM100 service fee.

The Salvation Army has also kept up with the times through its social enterprise unit, Red Shield Industries, which provides an online booking system for arranging a pickup for donations.

To avoid wasting the charity’s time with unusable items, users are also required to give an itemised list and upload photos of what they want to donate, all through the booking system.