Malaysian warship with historic inspiration added to an MMO game Naval fans can helm the Tier IV Rahmat, a Dido-class cruiser based on the decommissioned Malaysian warship KD Rahmat. — World of Warships

An historic Royal Malaysian Navy warship has been used as the inspiration for a playable unit in a naval warfare-themed multiplayer online game.

In a recent update, World Of Warships added Pan Asian Cruisers, a new branch of ships described as having “small-caliber guns with high rates of fire and powerful deepwater torpedoes, but they cannot boast of having high survivability”.

This includes the Tier IV Rahmat, a Dido-class cruiser which in the game is named after but is not the same ship as the decommissioned Malaysian warship KD (Kapal Diraja) Rahmat.

To note the actual KD Rahmat is a different class of ship called a missile frigate, while in reality the Royal Malaysian Navy did not use Dido-class cruisers.

A spokesperson for the video game explained that the name Rahmat was chosen in line with using names of ships that has existed, that are also traditional for the naval forces of the respective country.

According to the Rahmat Maritime Museum, where the ship was docked and converted into a life-sized historical monument, the frigate was launched back in 1967 under the name of KD Hang Jebat.

However, after a run of unfortunate events in 1970s, it was renamed KD Rahmat. It also boasted several firsts for the region including Surface to Air Missile (SAM) launchers.

It was updated several times throughout the 1980s and was eventually decommissioned in 2004.

According to vessel tracking service Fleet Mon, after being decommissioned, it was handed over to the Perak state government and converted into a museum ship in 2011.

However, back in 2017, the ship started to take on water and partially sank. Its current status is unknown. 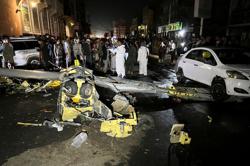