From China to Best Buy: Gaming controllers hit bumps on way to US consumers

By Timothy Aeppel and Xiaoyu Yin

A Rotor Riot RR1852 for iPhone game controller is displayed at T2M’s warehouse in Pembroke, Massachusetts, US. The controllers were on their way to Los Angeles when they got stuck waiting to be unloaded from a ship for what turned out to be an extra three weeks. — Reuters

PEMBROKE, Mass./DONGGUAN, China: Fraser Townley eyes two gaping holes in one side of a pallet one of his workers just pulled out of the orange Hapag-Lloyd shipping container that arrived here at his warehouse from China one recent chilly morning.

“Clearly a forklift,” he mutters.

The damage could have happened anywhere along the 10,710-mile odyssey his company’s gaming controllers make from China’s Guangdong province where they are manufactured to his warehouse 30 miles south of Boston, just one stop on their way to big-name retailers like Best Buy. Yet Townley, CEO of T2M, is grateful to have his products arrive at all.

A global breakdown of supply chains in the wake of the Covid-19 pandemic, which led to a sharp contraction, then a snap back in demand that caught most businesses wrong-footed, has overwhelmed ports and left manufacturers, retailers, railroads, and truckers scrambling to get goods to shelves, especially in the crucial runup to the year-end holidays.

The situation is so dire that a White House task force is working to ease the backlog, while shortages of imported goods are blamed with helping fuel an inflationary surge that has the Federal Reserve as well as many consumers on edge.

The pileup casts a shadow over a globalised system that T2M and many other producers have relied on to get products made cheaply in distant factories. As companies developed these supply chains, they whittled down to the bare minimum the stocks they kept on hand. That is great for the bottom line, but a disaster when supply lines clog as they have now.

T2M’s mobile gaming controllers, including the only full-size device designed to work with a hard wire on an Apple iPhone, are sold by Best Buy and other big chains such as Walmart and Target, and on Amazon.

Townley doesn’t own a factory. Instead, like countless other consumer products companies, he designs the devices and has them made by a Chinese plant. He has a China-based employee, Breeze Feng, the company’s senior structural engineer, keeping an eye on production at the Dongguan factory until the goods are packed into containers to be trucked to Hong Kong for shipping to the US West Coast.

Feng said the crisis hit a boiling point in June, just as they were doing a push to get goods to the United States in time for the year-end holidays. “We went to pick up containers three times but failed,” she said, explaining that they had booked slots on ships. “They didn’t have a container to load our goods, so there is no way” they could ship.

Speaking at the Chinese plant – where rows of workers in blue smocks and white caps hunched over workbenches assembling and testing controllers for T2M – Feng said it felt as though conditions were easing a bit by October.

“But now, after the new strain (Omicron) has appeared, we are actually still worried about whether it will go back to the situation as before,” she said.

T2M has limited ability to jump to other Chinese factories in this crisis. Feng noted that only a handful of factories are able to produce controllers that meet the Apple certification required by customers. “If we were going to replace our factory, it would not have been fast,” she said, so they didn’t even try to find alternatives.

They did, however, have to find new routes to get containers to their Boston warehouse. T2M receives one or two containers a month, each able to hold up to 40,000 controllers, and Townley closely tracks their progress.

In the past, he would ship them to Boston via the Panama Canal, a more direct and less expensive route that had become harder to access as port traffic snarled.

Now his normal procedure is to ship goods to Los Angeles, where his containers are put on a train to Newark, New Jersey, which is their official port of entry for US Customs. From there, a truck brings his boxes to his warehouse outside Boston. Workers at the warehouse then separate out the items and ship them on to distribution centres for the big retailers on trucks.

But nothing has been normal in recent months.

In September, he had a shipment of controllers he was trying to get to a distribution center in Kentucky for a large retailer who had ordered a specific design and set a launch date for a promotion.

The controllers were on their way to Los Angeles when they got stuck waiting to be unloaded from a ship for what turned out to be an extra three weeks. Once the container came off, he tried to ship it directly to Kentucky in order to hit the deadline rather than first sending it cross-country to Newark and then on to his warehouse, as originally planned.

“Unfortunately, everyone but the Customs people could be flexible,” said Townley. His solution was to air freight more controllers straight from China to Tennessee, via Chicago.

Problems don’t end once the controllers get to his warehouse. Finding truckers to haul goods to end customers has become such a challenge that Townley explored buying his own truck. He decided not to do it.

As a small company, he has no clout with his customers to pass along those expenses. Instead, he’s rushed to cut costs. He picks up one of his controllers and points to the brightly coloured buttons. By skipping the colour – the buttons are now just black – he shaved 50 cents of this piece, he notes. He also slightly reduced the size of each box and eliminated a plastic cradle that held the controller inside.

Townley is well positioned to play these games. He came to the United States from Britain decades ago to help Circuit City set up sourcing in China, so he’s spent most of his working life thinking about how goods make it from one place to another.

While no one anticipated the current crisis, there are some techniques that help keep products and profits flowing. Take the punctured pallet. One task assigned to T2M’s factory monitor Feng is to photograph every pallet before it’s loaded into a container in China. That allowed them to quickly determine that the pallet wasn’t damaged before it was loaded.

In this case, the container was pulled for a spot Customs inspection in New Jersey, so Townley is convinced the damage occurred there.

“On this occasion, the damage was limited to two cases. So we’re in the US$1,000’s, but not tens of thousands” range for the loss, he noted. – Reuters 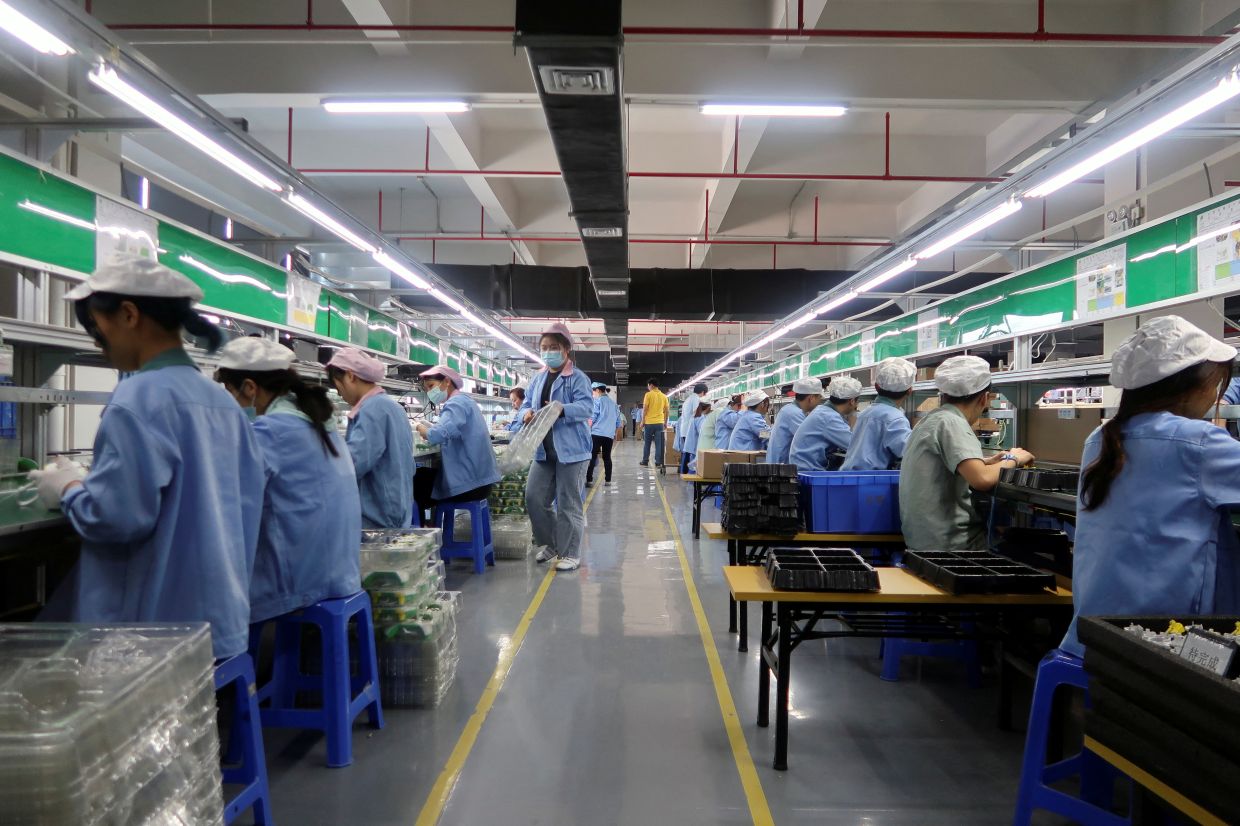 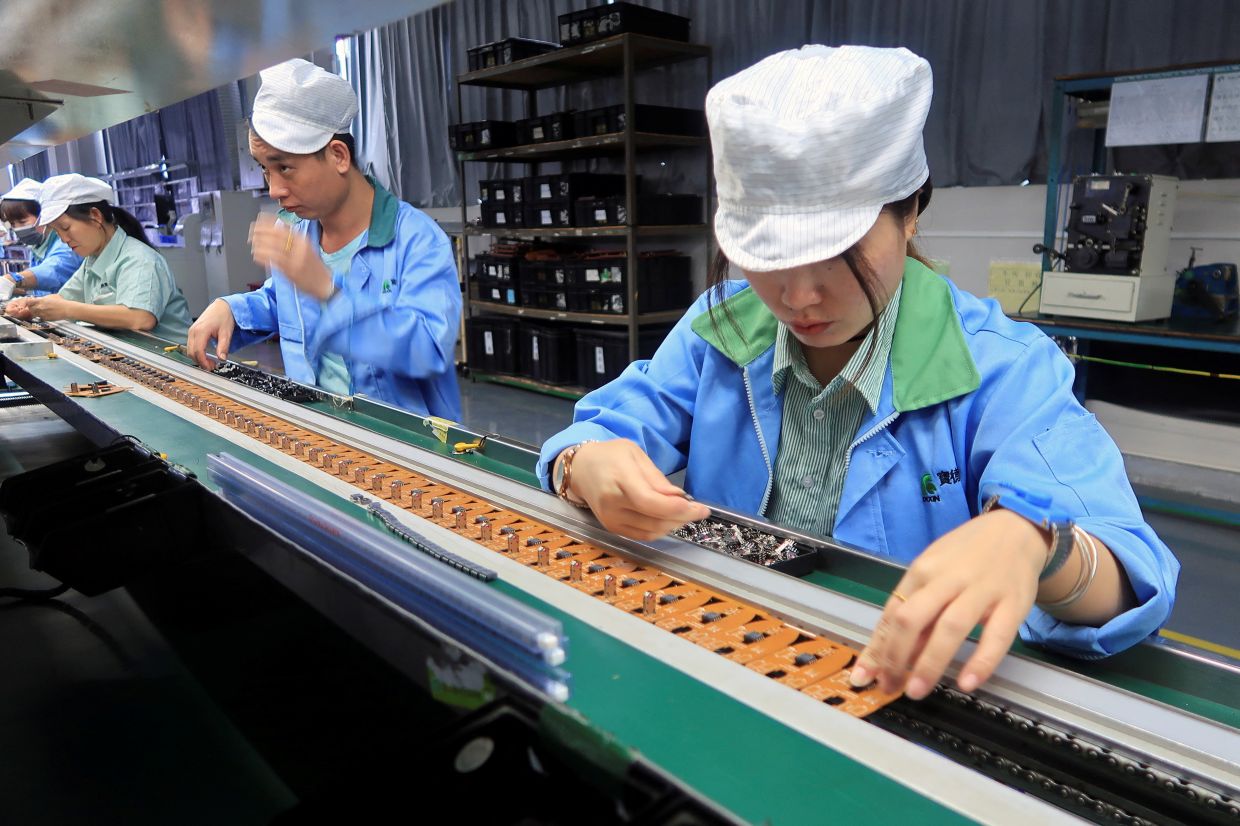 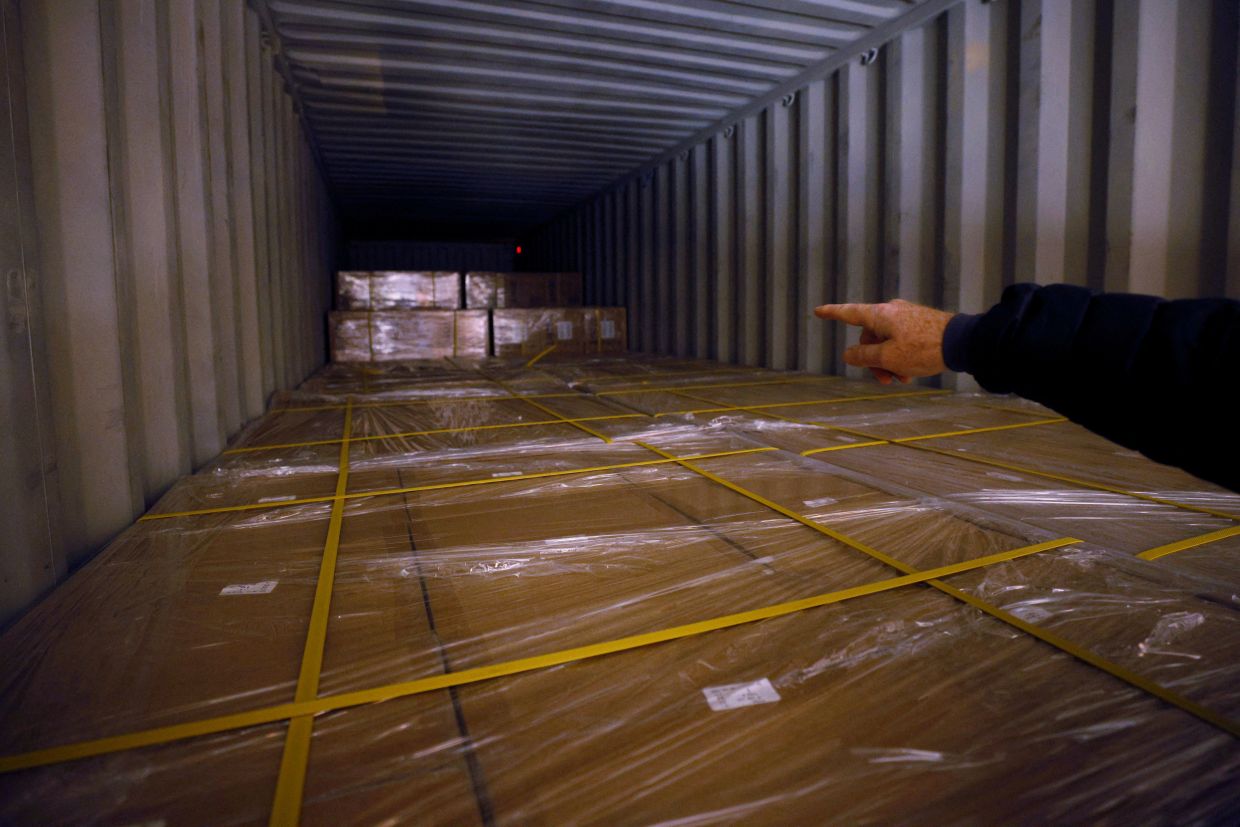 A Rotor Riot RR1852 for iPhone game controller is displayed at T2M’s warehouse in Pembroke, Massachusetts, US. The controllers were on their way to Los Angeles when they got stuck waiting to be unloaded from a ship for what turned out to be an extra three weeks. — Reuters

An employee works on the production line of RiotPWR mobile gaming controllers for US company T2M, at a factory in Dongguan, Guangdong province, China. — Reuters

Workers (left-right) Mike Mayes, Brian Walsh, Jamie Goldstein and John Lannan, who are all neuro-diverse, inspecting some of T2M’s video game controllers for mobile devices at the warehouse in Pembroke, Massachusetts, US. — Reuters

Employees work on the production line of RiotPWR mobile gaming controllers for US company T2M, at a factory in Dongguan, Guangdong province, China. — Reuters

At the Chinese plant, rows of workers in blue smocks and white caps hunched over workbenches assembling and testing controllers for T2M. — Reuters

An employee works on the production line of RiotPWR mobile gaming controllers for US company T2M, at a factory in Dongguan, Guangdong province, China. — Reuters

Employees work on the production line of RiotPWR mobile gaming controllers for T2M, at a factory in Dongguan, Guangdong province, China. — Reuters

A shipping container of T2M video game controllers for mobile devices, assembled in China, is delivered to their warehouse in Pembroke, Massachusetts, US. — Reuters

Townley points into a shipping container of T2M video game controllers for mobile devices, assembled in China, at their warehouse in Pembroke, Massachusetts, US. — Reuters