US startups use tech, ‘gamification’ for public health problems 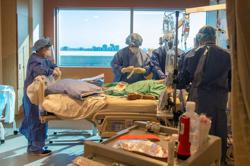 The public health crisis related to the Covid-19 pandemic has often been a boon to so-called digital health companies, even as it has exacerbated the problems that companies seek to solve. — Dreamstime/TNS

Matthew Loper’s mission to use technology and science to revolutionise health care began when he observed vastly different outcomes for relatives with the same disease.

The CEO and co-founder of Wellth, an app that incentivises users to make healthy choices, like regularly taking medicine, had an aunt and an uncle diagnosed with Type 2 diabetes.

Even though the relatives share similar upbringing, education levels and genetics, his aunt thrived after her diagnosis by remaining vigilant about taking insulin and getting treatment, while his uncle faltered, had a stroke and wound up in a skilled nursing facility in 2016.

Loper, one of a bevy of entrepreneurs seeking to transform health care and insurance through technology, wanted to understand how the outcomes could diverge so extremely.

“How do you actually create motivation in people?” Loper said. “How do you get someone who never would have gone to see their doctor or taken those medications, or used that app, to actually follow through with it?”

Wellth, founded in 2014, seeks the answers by employing behavioural economics, which takes into account individual biases and how they affect decision-making. Users can earn small payouts, funded by Wellth clients that include medical groups and insurance companies, for doing things like taking their medication daily, a “gamified” feature that encourages habit-forming behaviours.

Streaks can earn participants more money – which can be spent only on things such as groceries, household needs, home repairs and auto costs – and users can spin a “prize wheel” every few days for a chance to win larger payouts. Gamification is used frequently by financial technology and other tech firms to upend traditional business models and capture market share.

Wellth has raised more than US$11mil (RM46.51mil) the past few years, boasts tens of thousands of users and has decreased hospitalisation rates by as much as 40% in some populations, Loper said.

So-called digital health companies are attracting capital at an increasing rate, according to Megan Zweig, chief operating officer of the seed fund Rock Health. In the first nine months of 2021, these companies pulled in more than US$20bil (RM84.58bil) in venture capital investment, up from US$14.6bil (RM61.74bil) in 2020 and US$7.9bil (RM33.40bil) in 2019, the firm said.

Whether digital health will drive better health outcomes largely remains to be seen, Zweig said, but the industry is already changing how people think about health care.

Digital health companies sit in a unique position during the Covid-19 pandemic. Despite its devastating effects, the public health crisis has often been a boon to the business, even as it has exacerbated the problems these companies seek to solve.

“I’d say for the industry it was definitively good,” said Mark Frank, CEO of the company SonderMind, a behavioural health platform founded in 2014 that pairs patients seeking mental health services with vetted therapists. “It actually worsened the (Covid-19) problem, but it made the problem so in everybody’s face that it opened up many, many investors’ eyes around how important this is for overall health and to a well-functioning society.”

Those investors are funding a diverse and innovative array of digital health startups that prioritise user experience and virtual care.

Others use technology to address high costs of medical care. PayZen, a health care fintech startup that leverages artificial intelligence to underwrite patients’ medical debt, allows users to pay for care over time in installments. It raised US$15mil (RM63.43mil) in Series A funding in November.

Still others, like Paceline, which raised US$29.5mil (RM124.75mil) in July, utilise a similar approach to Wellth by offering financial rewards for hitting exercise goals, designed to ward off the massive long-term costs of chronic illnesses.

“We were seeing an upward trend in terms of investment across the past 10 years, but nothing like the magnitude of funding that we’ve seen in 2020 and 2021,” Zweig said. “So it really was Covid that flipped the switch in terms of every player in health care, every consumer realising the importance of virtual care solutions.”

Growth in digital health has come at some cost, especially in the mental health sector, which Rock Health says is the top-funded therapeutic focus so far in 2021.

Frank, of SonderMind, said the field is getting crowded with competition, although that’s not an issue for his company, which has leaned more heavily on its technological capabilities since the start of the pandemic. Before March 2020, SonderMind primarily linked patients and providers for in-person sessions. More than a year and a half into the pandemic, the company now delivers roughly 70% of care via telehealth.

“The competition always makes things a little harder,” Frank told CQ Roll Call. “I welcome it and relish it. It pushes everybody.”

But the sheer number of new digital health companies has made it more difficult for consumers, investors and medical providers to determine which are legitimately interested in addressing issues in public health and which are trying to exploit the latest health fad.

“There are a lot of companies that have gotten funding that have taken advantage of this situation,” Frank said.

A recent report from the Solomon Center for Health Law and Policy at Yale Law School found many behavioural health apps offer bad or misleading advice to patients. The center called for better regulation of digital health companies from federal agencies like the US Food and Drug Administration.

Venture capitalist Hunter Walk, who co-founded the seed-stage venture fund Homebrew, listed his concerns with digital health in a blog post earlier this year. Among them are companies that offer mental health services, attract investors and customers, then go out of business, leaving people with serious medical needs stranded.

“This is my most significant concern about the wave of mental wellness startups being funded with venture dollars – what happens to the clients of the ones which fail?” Walk wrote.

Frank, however, expressed confidence that the market would weed out the bad actors, leaving only more legitimate companies standing.

Those that outlast the competition must also wait to see if customers continue to choose their tech-based health care solutions after the pandemic. Frank, Loper and Zweig each expect that to happen.

“I’m not going to take credit for this statement,” Loper said. “But I heard someone say once: When we all started using Netflix, no one went back to Blockbuster.” – CQ-Roll Call/Tribune News Service