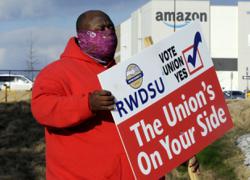 Workers pack boxes during operations on Cyber Monday at Amazon’s fulfillment center in Robbinsville, New Jersey, US. Of the almost 20,000 employees the company said contracted the coronavirus last year, Amazon maintains only 27 potentially caught it at work, according to the Strategic Organising Centre. — Reuters

Amazon.com Inc provided “misleading or grossly incomplete” data about the number of Covid-19 infections potentially spread in its US facilities, according to a labour group calling on the federal government to investigate the company.

Of the almost 20,000 employees the company said contracted the coronavirus last year, Amazon maintains only 27 potentially caught it at work, according to the Strategic Organising Centre, which reviewed Amazon’s annual workplace illness and injury disclosures to the US Department of Labor. Federal authorities last year required companies to report work-related Covid-19 cases.

The centre, whose members include the International Brotherhood of Teamsters and the Service Employees International Union, compared Amazon’s Covid-19 disclosures with county health department records about Covid outbreaks in Los Angeles, Salt Lake City and the Portland, Oregon, suburb of Troutdale. The three health departments found more than 750 Covid cases among Amazon workers, but Amazon’s disclosures suggest none of them were work-related, according to the study.

“The available information is screaming for an investigation,” said Eric Frumin, the Strategic Organising Center’s health and safety director. “How is it possible for the company to say it had 20,000 cases and only 27 were transmitted at work? That defies science and logic.”

Amazon disputed the study’s conclusions, saying that the Occupational Safety and Health Administration has acknowledged the difficulty of proving whether a person contracted Covid-19 while on the job. Amazon interviews employees to determine exposure risk and has conducted 1,800 vaccination events at its facilities, according to spokeswoman Kelly Nantel.

“These claims are intentionally misleading to try and paint a false picture,” Nantel said. “While we know we aren’t perfect, we’re working hard every day to listen to the experts and keep our teams and communities safe, which has included incurring more than US$15bil (RM63.03bil) in costs for things like extensive contact tracing, on-site vaccine clinics and testing.”

Amazon benefited from a surge in online shopping during the lockdown period of the pandemic even as many retailers were forced to close stores. Last year, Amazon’s sales jumped 38% to US$386bil (RM1.62 trillion), and the company posted record profits.

The company’s e-commerce boom coincided with a barrage of criticism from workers, labour groups and government officials, who said Amazon didn’t do enough to protect workers and was stingy with Covid data.

Earlier this month, Amazon agreed to improve its communication with California employees and local health departments about Covid-19 outbreaks and pay US$500,000 (RM2.10mil) to resolve an investigation launched last year by the state’s attorney general. In February, New York Attorney General Letitia James filed a lawsuit alleging Amazon failed to comply with workplace safety rules during the pandemic and retaliated against warehouse employees who voiced concerns. That case is pending.

Federal authorities should to take a broader look at Amazon’s practices, said Steven Markowitz, an epidemiologist at the City University of New York and an expert in occupational risks.

“People are acting like the pandemic is over, but we’re still in trouble,” he said, citing the new omicron variant. “OSHA says you have to make a good-faith effort to determine if a case is work-related, so you want to know how Amazon arrived at only 27 cases out of nearly 20,000.” – Bloomberg

The Amazon lobbyists who kill US consumer privacy protections 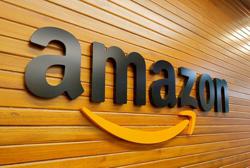 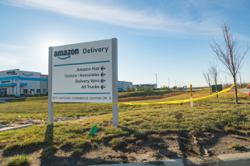 How 3D-printed filters could limit pollution from tumble dryers
App-titude for productivity
Finger-nibbling robots; heartbeat detecting lightbulbs: Strange inventions on show at CES 2022
Who’s watching? How governments used the pandemic to normalise surveillance
Cryptocurrency is volatile, yes. But is it just a trend, or here to stay?
Hot mic on Internet livestream catches US judge ridiculing attorney after hearing
Experts say teens should be limited in time they spend on social media
What is the 'Locket' app? New widget adds loved ones to homescreen
Remember Covid-19 phone alerts? California app ignores at-home tests, missing exposures
Apple to require employee proof of COVID-19 booster -The Verge