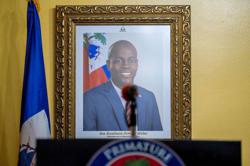 Police officers standing guard outside the Royal Courts of Justice in London. Jaffer and Lewis admitted misconduct in a public office by entering a crime scene without authorisation, sending information about their attendance to members of the public and taking photographs of the crime scene. — AFP

The guilty pleas came after another serving officer with the Metropolitan Police was recently jailed for life for the kidnap, rape and murder of a woman earlier this year.

Both cases have threatened to undermine public confidence in the London force, and have piled pressure on its commissioner, Cressida Dick, to resign.

Danyal Hussein, 19, was last week sentenced to life in prison for murder after telling the court he had made a pact with “a demon” to kill women.

Officers Deniz Jaffer and Jamie Lewis were tasked with protecting the scene, but instead took “inappropriate” and “unauthorised” photographs and shared them on social media.

“Lewis edited one of the pictures by superimposing his own face onto the photograph with the victims in the background,” said prosecutors.

“He sent the resulting image to Jaffer, who then forwarded it unsolicited to a female officer also present at the scene.”

They both admitted misconduct in a public office by entering a crime scene without authorisation, sending information about their attendance to members of the public and taking photographs of the crime scene.

The Met has already apologised to the victims’ family, who accused their investigation of being tarnished by racial bias.

Last week, the force said it was sorry “for the way we responded when the sisters were reported missing”.

But the women’s mother Mina Smallman, a retired Anglican priest, told Channel 4 News: “The time for apologies has long gone.”

Smallman, a 27-year-old freelance photographer, and Henry, a 46-year-old social worker, were killed in June last year as they celebrated Henry’s birthday at a late night picnic.

The women were reported missing by friends and relatives, but police officers failed to properly record and act on this information.

As a result, the sisters’ family and friends went out to search themselves and the next day found their bodies in the park. – AFP