XD CEO Huang Yimeng said Chinese regulators are ‘very well-versed with the video games industry’, despite a crackdown that has left the industry reeling. XD, operator of the TapTap games store, has grown rapidly since its 2019 IPO, but revenues are down this year as it awaits approval for its own titles. — SCMP

Beijing understands video games better than most people think, despite an ongoing industry crackdown, according to the co-founder of the Chinese gaming powerhouse XD, which is seeking to upend mobile game distribution with its zero-commission digital store.

In an interview with the South China Morning Post, XD co-founder and CEO Huang Yimeng said he remains optimistic about the future of video games in China, despite recent regulatory hurdles casting a pall over his company’s future. To Huang, though, Chinese gaming regulators are not fumbling in the dark, wreaking uncalculated havoc on the industry, as they are sometimes perceived.

“We interact a lot with the regulators,” Huang said. “In fact, regulators in China today are very well-versed with the video games industry.”

When Beijing outlined many new “red lines” for game developers this year, further restricting the type of content they can produce, it sent a chill through China’s gaming industry. At XD, losses have been mounting, and the company has been left waiting on approvals for its four self-developed games in China.

But the 38-year-old Huang said regulators understand both blockbuster games and his primary area of the industry, indie games, or smaller titles created by independent developers.

“They are very clearly aware of what indie games are, as well as the standards we use to measure them,” Huang said. “They also pay attention to gamers’ feedback and so they understand what gamers like or do not like.”

XD is one of a few Shanghai-based gaming firms that has recently been expanding at a rapid pace. Among its big investors is TikTok-owner ByteDance, which was a cornerstone investor in its 2019 initial public offering in Hong Kong, along with miHoYo, maker of the hit game Genshin Impact.

Alibaba Group Holding, owner of the Post, also invested in XD after the IPO through its subsidiary Taobao China.

Huang is now worth US$1.2bil (RM4.97bil), according to the 2021 Forbes Billionaires list. He is also the rare Chinese technology executive who is active on Twitter, regularly opining on the latest industry trends and Western tech.

By distributing quality Chinese games like Muse Dash overseas, and bringing foreign hits like Human: Fall Flat to China, Huang hopes his company can bridge China’s gaming industry with the rest of the world. One of its tools in this pursuit is the TapTap games store, which competes with the app stores of Apple and Chinese smartphone makers by not charging a commission for sales.

Apple takes a 15% to 30% cut of sales or in-app purchases, while Chinese Android app stores might take as much as 50%.

“Chinese game developers have no options to choose right now,” Huang said. “For us, dragging down the platform tax is only one aspect of it. The more important part, I think, is that we need a more reasonable and healthy approach where we can provide a free choice for platforms and developers to settle a platform tax or commission.”

Some have criticised TapTap for what they see as an unsustainable business model, but usage has only been growing. In the first half of the year, TapTap’s overseas monthly users rose more than fivefold to 13.2 million, compared with its 28.7 million users in China.

This growth has attracted new investment, with Chinese video streaming giant Bilibili putting HK$960mil (RM512.16mil) into the company in April.

XD’s total workforce has nearly doubled since its IPO to 2,300 employees, up from 1,200 employees two years ago, according to Huang. About 400 people currently work on TapTap.

Huang now faces a balancing act with Chinese regulators, which are increasing scrutiny of everything from video game content to monetisation strategies. In a memo seen by the Post last month, China’s National Press and Publication Administration organised a training session with game developers detailing many red lines that they should avoid.

This followed a drastic reduction in gaming time for minors, when a new rule that went into effect in September restricted people under 18 years old to playing only between 8pm and 9pm on Fridays, Saturdays, Sundays and statutory holidays.

Since August, there have been no new video game approvals in China, which requires games to be licensed for sale in the country.

Huang said XD is expecting to launch at least two games in China next year, but he acknowledged that he does not know when the government will resume game approvals.

As XD awaits this lifeline, company revenue has started to slide. It was down 4.3% to 1.38bil yuan (RM895.11mil) in the first half of the year, according to its latest financial report published in August. Losses widened to 325mil yuan (RM210.80mil).

While Huang was critical of a state media commentary in August that criticised video games as “spiritual opium”, he has also remained realistic.

When asked whether China’s restrictions will make games in the country look increasingly different from those overseas, Huang said, “Yes. I think this may be a circumstance specific to this stage in time.”

“But this is the reality” for Chinese gaming companies, he added. – South China Morning Post 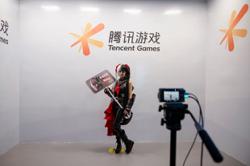