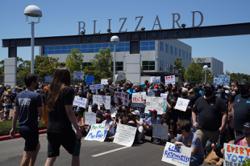 A file photo of employees during a walkout at Activision Blizzard offices in Irvine, California. CWA said they had ‘formally filed unfair labour practice charges against the company for worker intimidation and union busting’. — AFP

WASHINGTON: Activision Blizzard has been accused of intimidating workers attempting to unionise, organisers said, just months after the US video game maker faced a state lawsuit over toxic workplace claims.

In August the company behind Call Of Duty and World Of Warcraft promised change with a management shakeup following long-running allegations of sexism and discrimination.

The Communications Workers of America (CWA) said Tuesday they had “formally filed ULP (unfair labour practice) charges against the company for worker intimidation and union busting”.

In a statement, the union said employees had launched a “Better ABK” campaign following a July complaint, filed in Los Angeles Superior Court, accusing the firm of having fostered a toxic culture of harassment and sexism.

It was part of workers’ “strategic organising effort to unite developers behind a shared set of concerns”.

The CWA said Activision Blizzard was “using coercive tactics to attempt to prevent its employees from exercising their rights”.

“Management could have responded with humility and a willingness to take necessary steps to address the horrid conditions some ABK workers have faced,” said Tom Smith, CWA’s national organising director.

The allegations follow a walk-out earlier this year to protest sexism and harassment.

In August, the firm unveiled a management shakeup and launched what it promised would be a far-reaching review of its workplace practices after the California state lawsuit. – AFP

Hit with #MeToo revolt, Blizzard Entertainment chief is out