Cryptocurrency promise for UAE’s unbanked migrants – but not yet

Dubai and the rest of the United Arab Emirates (UAE) is moving closer to opening licensed cryptocurrency exchanges, a step that could boost financial inclusion for the millions of expatriates who make up most of the region’s workforce. — Reuters

DUBAI: Every month, 24-year-old parking attendant Ramesh Giri waits outside a money transfer office in Dubai to send US$600 (RM2,533) in cash to support his parents and two brothers in Nepal.

He dreads the routine, which costs him up to US$7 (RM30) each time and is keeping him from saving enough to fulfil his aspiration of becoming a restaurateur – but that could all change in the weeks ahead.

Dubai and the rest of the United Arab Emirates (UAE) is moving closer to opening licensed cryptocurrency exchanges, a step that could boost financial inclusion for the millions of expatriates who make up most of the region’s workforce.

Using online wallets, migrants could one day be able to send remittances home with smaller fees – or none at all – and within minutes, skipping the long waits in the Gulf’s heat and humidity.

“It’s free,” said Giri, who has been learning about cryptocurrencies and, along with the speed and savings, sees the added potential of letting him keep track of his finances more easily on his smartphone.

“I hope it can help me see what’s happening with my money and be able to save – because I can’t right now,” he told the Thomson Reuters Foundation.

According to the World Bank, about 1.7 billion adults around the world did not have bank accounts as of 2017 – more than a quarter of them in India, Indonesia, Pakistan and Bangladesh.

Many of those countries are among the top senders of migrant workers to the Gulf, where they work in construction, the hospitality industry or domestic work to send money back home to their families.

Government data show that out of the UAE’s population of more than nine million, nearly 80% are expats.

Last year, the region sent US$43bil (RM181.56bil) in remittances, making it the world’s second-highest sender after the United States, according to the Global Knowledge Partnership on Migration and Development (KNOMAD).

The global think tank said the remittance industry makes up about 12% of the Emirates’ gross domestic product.

The UAE’s path towards digitising the industry began last year, when its Securities and Commodities Authority stipulated that anyone offering crypto assets in the Emirates must be formally licensed and comply with a range of anti-money laundering, cybersecurity and data protection laws.

So far, six companies have qualified under the regulations to create crypto exchanges, with two reaching the first stages of going live.

One of those, MidChains, is a crypto asset trading platform based in Abu Dhabi and is preparing to launch for trading.

Technically, the platform will be open to everyone. “There is no earnings threshold,” said MidChains co-founder and chief executive officer Basil Al Askari.

But he acknowledged that the documentation clients need to provide to meet regulations, including proof of residence, income and secure assets, means migrant workers will likely be shut out.

Askari said he hoped remittances will one day be a regular feature of the UAE’s cryptocurrency services.

“If you’re talking about finance and banking for the unbanked... that’s where we want the technology to lead,” he said.

For now, though, access to cryptocurrency in the region will mainly be limited to trading firms, hedge fund investors and high-net-worth individuals. “It doesn’t really help (migrant workers) because they might not be able to go through the compliance requirements in order to open accounts,” Askari said.

Before cryptocurrency takes hold in the UAE, authorities need to boost awareness among users on how to safeguard their digital assets, said George Kuruvila, a partner at Fotis International Law Firm.

So far this year, Dubai residents have lost nearly US$22mil (RM92.86mil) in cryptocurrency scams, according to figures from the Dubai Police.

Kuruvila, whose firm advises clients in Dubai on financial technology regulations, says younger generations will be the first to learn how to trust cryptocurrencies and use them more securely.

Part of that is due to one risk the UAE cannot mitigate, he said – the volatility of digital currencies.

Bitcoin, for example, had one of its most volatile months in May 2021, first increasing steadily before losing 35% of its value.

“Let’s say somebody puts all of their savings into bitcoin today. No one can guarantee that it won’t crash tomorrow. There is no regulator for that,” said Kuruvila.

Such highs and lows could be disastrous for anyone sending small amounts in remittances.

“When it comes to migrant workers, it’s their everyday bread and butter,” he said.

That volatility has already put off Emma Ogode, a Kenyan working in the hospitality industry in Dubai.

“I see it as betting money – you have to put in a certain amount. Then maybe you win, (but) if you don’t, you will have to put in more. Then, all your finances will go away,” said Ogode, 32.

She said she spends about a day every month calling different remittance offices to find the best exchange rates and transfer fees, before inevitably waiting in a long line to send money home.

But for her, cryptocurrency is not the answer.

“I don’t trust it,” she said. – Thomson Reuters Foundation 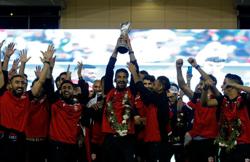