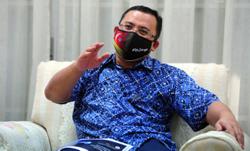 To ensure nations with poorer internet connectivity are heard, the UN is exploring ways to bridge digital divides. — AFP

Zambian climate campaigner Precious Kalombwana was thrilled to take part in an online training workshop with former US Vice President Al Gore. But when she wanted to speak, a shaky internet connection meant no one could hear her.

Pandemic moves to virtual events — including UN climate talks starting on Monday — have made it easier for experts and activists worldwide to participate, but many living in places without reliable connectivity say they are still missing out.

For Kalombwana, 27, the workshop with Gore turned out to be a frustrating experience.

"It was very devastating and very stressful when you are trying to be connected and you can't speak," said Kalombwana, who belongs to the Citizens Network for Community Development Zambia, a non-profit campaigning for climate action.

"I would like to take part in those meetings because they're very important to me as a climate activist. I want to get in contact with people, to hear more ideas of what we can do. I get frustrated when I can't attend," she told the Thomson Reuters Foundation by phone.

Before Covid-19 put a stop to most large, in-person gatherings early last year, activists like Kalombwana faced a different set of obstacles if they wanted to take part in overseas climate events.

Onerous visa regimes, long journeys and costly airfares made engaging hard. The switch online, as a result of the pandemic, made it possible to simply log into events instead.

But the shift has also highlighted digital divides, with people living in poorer areas and developing nations on the frontlines of climate change often struggling with the worst connectivity.

Many people rely on their office for internet but can no longer go there due to pandemic restrictions, while others face deliberate shutdowns by authorities, such as in Myanmar, or are limited to poor-quality mobile phone data.

"It's going to lead to unfair outcomes and it is going to reinforce power inequalities that exist between nations and also allow for the opposing voices to be shut out," said Harjeet Singh, a senior advisor on climate impacts with the Climate Action Network International.

"That is a real fear — and we do see that happening."

'How can we be inclusive?'

In a sign of the depth of concern over unequal internet access, delegates will not make any formal decisions during the online UN climate negotiations starting this week in the build-up to the COP26 talks in Glasgow in November.

That was decided after some poorer nations said they feared connectivity issues could disadvantage them.

The shift to virtual events has, however, prompted debate about how to offer practical support to ensure people with patchy connections are not excluded.

"More people are asking 'How can we be inclusive, how can we make sure that we can have more voices around the table, who are we missing?'" said Eleanor Sarpong from the Alliance for Affordable Internet (AA41), a global coalition.

There is plenty that can be done to include people whose connections are not up to the data-heavy video streaming that dominates many virtual events, experts said.

He suggested sign-up forms should include questions about which devices and connections people will be using, and provide advice on which option would give the best experience.

And if speakers are disrupted by glitches in their internet, organisers should give them another chance if their connection returns, Singh said.

Many events are also exploring hybrid models that mix live video and other formats, said Sarpong.

Interviews can be pre-recorded and then woven into live online events, with the contributor on hand to take part in follow-up discussion via text chat or audio as their connection allows, Sarpong said.

Some are also taking discussions to lower-bandwidth forums such as the audio-only Clubhouse social media platform or WhatsApp groups, with a moderator feeding input back to those at the main video event, she said.

Some organisations give grants for internet data which would otherwise be unaffordable for many, said Sarpong, or they cover the cost of going to well-connected business centres and hotels in areas where internet infrastructure is poor.

Singh said a UN office in Nepal had invited other organisations to use its premises and internet connection to join a round of talks if they were struggling to get online, an initiative he suggested could be taken up more widely.

High-pressure events such as long-hours UN negotiations may also demand a more focused working environment free from the distractions sometimes encountered at home, he said.

"You need full attention to that subject which means that you cannot be in a family set-up and do it," he said.

"We need to really think through... how we can create that atmosphere, responding to the new challenges and the new ways of working."

With meetings held across multiple time zones, timings should be varied to ensure no one group consistently misses out, Singh said.

This option has been adopted for the June climate talks, with shorter daily sessions over three weeks instead of two.

Still, building rapport is harder over a screen than a coffee, Singh noted.

With digital events opening up new opportunities to connect, organisers must make the effort to "think outside the box" to ensure a wider range of voices are heard, said Sarpong.

"There's no excuse to say 'because we're doing this virtually we will just have people from the Global North'... when the people who have been affected are in some of those (developing) countries and they would be in the best position to speak up about their own experiences," she added. — Thomson Reuters Foundation