Thor hopes to get his motorcycle licence in the near future and continue working as a delivery partner with a motorcycle. - Bernama

GEORGE TOWN: By day, Thor Al Wayne, 26, puts on his white coat and serves as a physiologist in a private hospital.

But right after dusk, he changes into the iconic pink and gray uniform, sets up his tracking system on his smartphone and prepares to make food deliveries.

But unlike most FoodPanda delivery partners, he uses his friend’s mountain bike and travels between 10 and 15 kilometres every day until midnight to make deliveries within areas such as George Town and Bayan Lepas.

“You don’t usually get paid for keeping fit but here I am,” Thor chuckled during an interview with Bernama at his family home in Jalan Zoo, Ayer Itam near here.

This has been Thor’s daily routine since the second Movement Control Order (MCO 2.0) was implemented in Penang in January this year.

He said that the MCO 2.0 has severely affected his business in a swimming school and lost 75% of his income from there.

“Before Covid-19, the swimming school had at least 50 students, but after the whole Covid-19 ordeal, we had less than 20 students during RMCO and CMCO and now, parents are very afraid to bring their children for swimming classes,” he said.

He said that in order to handle his monthly financial commitment, he registered himself to work as a delivery partner.

“So far, both of my jobs have really helped settle my monthly commitment, especially during the current Ramadan period when there is an increased demand for our services,” he said, explaining that he also makes food deliveries between 2am and 4am for sahur.

Meanwhile, Thor said some of the main challenges he faced as a Foodpanda cyclist include rainy weather and the security of the mountain bike when making deliveries in flats.

He said that when making deliveries to flats, he has to bring his bike alongside with him into the lifts as he is worried that the bike would get stolen.

“Some of the flats either have faulty lifts or no lifts at all. I remember one time I had to climb more than 10 floors with the bike just to make the delivery,” he said.

He hopes to get his motorcycle licence in the near future and continue working as a delivery partner with a motorcycle. – Bernama 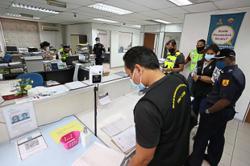